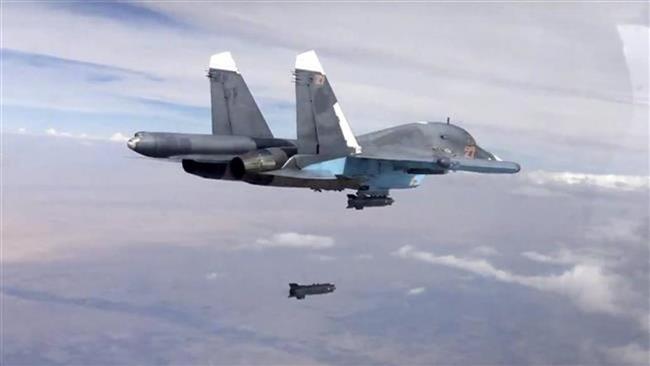 [ Editor’s Note: The Russian air command has put the blame for this “slightly friendly fire” incident squarely on the US where it belongs, as Moscow has been asking the Pentagon to keep it informed of where the “good terrorists” the US supports are located, which it has refused to do.

The reasons are quite clear. It does not want the Russians to know because we are mixing them in with the regular terrorists with whom they have truces to control certain territory and coordinate supplies, things like TOW missiles and advance ground to air ones used to bleed the Syrian and Russian air efforts.

It’s a nasty business having to sit down at a table and work “together” with people you know are killing your own people using terrorist proxies, yet calling it an anti-terrorism campaign.  I suspect the Russian people are amazed at how the free and democratic American people just lap this  all up with so little outrage against our own government’s involvement in the lethal charade.

But just like with 9-11, the more “they” get away with, the more “they” will put on us in the future when we have shown we are comatose in terms of any major resistance. There is no better example than our current presidential race where neither party or candidate has really been challenged on the US campaign of using proxy terrorists as one of its main foreign policy tools.

Even further behind the curve is asking about why more is not being done about the prevalence of mini-nukes being used, field testing them in the current wars. The military and top security people have to realize these will eventually be used on our own people in retribution, which begs the question, “Who has betrayed who…and who are really the worst terrorists?” … Jim W. Dean ]

Russia has called on the US to disclose the location of what Washington calls “moderate” militants in Syria after their bases were allegedly bombed by Russian jets near the Jordanian border.

The US has accused Russia of bombing the At-Tanf military camp where a meeting of US-backed militants was allegedly underway to coordinate their attacks against purported Daesh terrorists.

The camp was used by US and British troops who had withdrawn a day before the Russian raid. A US official has claimed that several militants were killed in the Russian airstrike against the site.

Commenting on the claims, Russian Defense Ministry spokesman Major General Igor Konashenkov put the blame squarely on US authorities, saying they were refusing to give the coordinates of “moderate” militants and where they were based.

“Military chiefs of the special units of the anti-ISIL coalition countries are exclusively accountable for the fact that their troops are exposed to danger in the areas targeted by the Russian Aerospace Forces,” Konashenkov said, using an alternative name for Daesh.

“We are constantly calling, using all available channels, on our partners to provide information on the whereabouts of ‘moderate opposition’ units that they control. But instead, we only hear post factum reproaches and accusations indicating that the aviation of the Russian Aerospace Forces should not have carried out strikes on certain areas or targets,” he added.

The Russian Defense Ministry spokesman further said that the recurrence of such incidents can only be prevented through “joint actions.”

Since September 2014, the US and some of its Arab allies have been carrying out airstrikes against what they call Daesh positions inside Syria without any authorization from Damascus or a UN mandate but the attacks have done little to stop the Takfiri group’s advances.

In September 2015, Russia launched an aerial campaign of its own against the terrorists in Syria on an official request from the Syrian government.

Russia has long contested the US claim that “moderate” armed groups exist in Syria. Moscow, however, has expressed readiness for enhanced cooperation with Washington in the fight against terrorists.

Syria has been gripped by foreign-backed militancy since March 2011. United Nations Special Envoy for Syria Staffan de Mistura estimates that over 400,000 people have been killed in the conflict.

The UN has stopped its official casualty count in Syria, citing its inability to verify the figures that it receives from various sources.