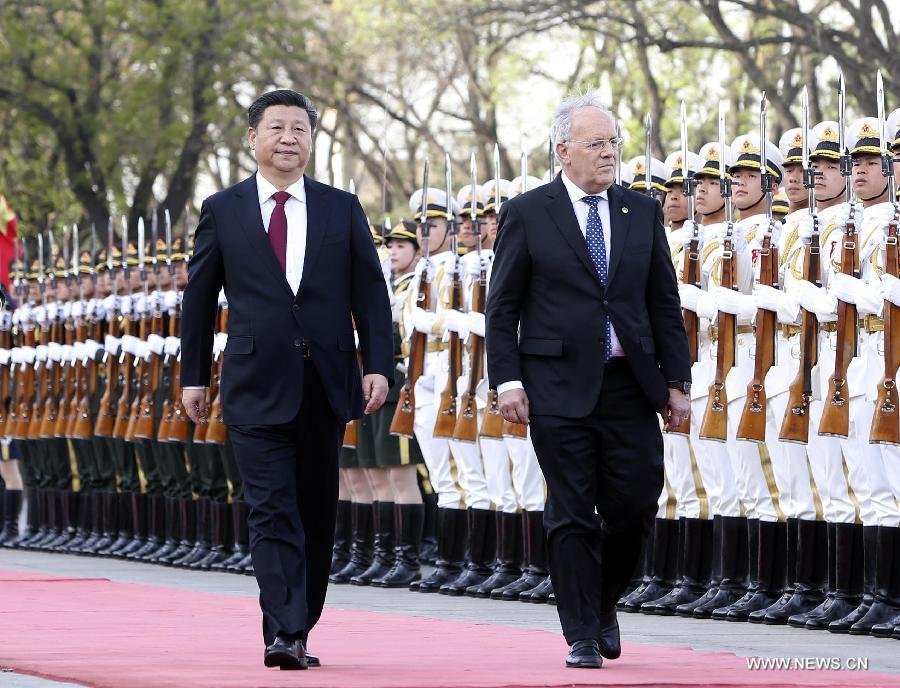 [ Editor’s Note: Whether you call it  China’s “European Pivot” or Switzerland’s “China Pivot” does not really make much difference, because the key aspect of their incredible relationship is that it spawned no political blacklash from anyone, or military one for that matter.

Both countries have a military history of focusing on defense only and not getting involved militarily in either regional disputes or other countries’ domestic disputes.

For the Chinese, it was just good manners, and a preference for just doing business; a talent shared by the Swiss that made them fellow travelers, right up to when the Asian Infrastructure Development Bank was started.

Offshore yuan trading is taking place in London now, after the one started in Switzerland. The banksters have not orchestrated a color revolution in Zurich, and the US has done no drone strikes, despite its being a major base for the Rothschild empire. So what’s up with that?

Why no major visible effort to make Switzerland heel by the big Western economies? Will the Swiss genetic secrecy take that secret to the grave… and to whose grave?… Jim W. Dean ]

At the beginning of April 2016, Swiss President Johann Schneider-Ammann went on a trip to China. In the course of his visit, he met with the General Secretary of the Communist Party of China Xi Jinping. The parties signed a number of documents reinforcing the Swiss-Chinese cooperation.

At the press conference that followed the meeting, Mr. Schneider-Ammann and Mr. Jinping declared that the two countries turned a new page in their relations and established a strategic partnership. A group of influential Swiss politicians and businessmen accompanied Swiss President on his trip to Beijing.

The list of industry sectors, in which China and Switzerland are planning to expand their cooperation, includes science, technology, education, urban planning, etc.

It should be noted that Switzerland has been China’s long-standing reliable partner. Diplomatic relations between the two countries were established in 1950. Over the years, their combined goods turnover had seen a 26-fold increase and exceeded $44 bn in 2015. Currently, People’s Republic of China is Switzerland’s number one trading partner in Asia.

Hundreds of Swiss companies have branches in the Celestial Empire employing tens of thousands of Chinese workers. Chinese companies are also present in Switzerland.

One of the most significant events in the Sino-Swiss relations was the signing of a free trade agreement in 2013. The then Swiss Economy Minister Johann Schneider-Ammann was one of the masterminds pushing the deal. At that point, Switzerland benefited from entering into the agreement since no other European country had free trade relations with China.

After the signing of the agreement, not only Swiss businessmen enjoyed special privileges, but the country became one of the intermediaries between Europe and the world’s second economy.

It did not raise anybody’s eyebrows when an offshore yuan trading center was established in Switzerland. The respective agreement was signed between the Swiss National Bank and the People’s Bank of China in January 2015 in Davos.

This development brought Swiss and Chinese economies even closer. As a result, Chinese and Swiss companies enjoy a more streamlined procedure for signing deals and making mutual investments. Besides, the flow of funds between the countries has also intensified.

When at the beginning of 2015 Johann Schneider-Ammann was elected Vice-President of Switzerland, while remaining the country’s Economy Minister (such situation is envisaged under the Swiss legislation), he continued taking steps to strengthen economic ties with China.

In the summer of 2015, in the course of his previous visit to China, Mr. Schneider-Ammann signed a deal on the establishment of the Asian Infrastructure Investment Bank (AIIB).

This deal had a special significance for China since it had been long dreaming of the creation of a global financial organization where it would play the leading role. It was envisaged that this new organization would become an alternative to the World Bank, International Monetary Fund and the Asian Development Bank.

China, having been unable to establish itself as a leader in the said organizations despite its economic power, thinks that the World Bank and the IMF are under an excessive influence of the US, while the Asian Development Bank is dominated by Japan.

It was in 2013 when China mentioned its intention to create AIIB for the first time. Since then, many Asian countries expressed their desire to participate in the project. Except for Asian countries, AIIB has non-regional members, including Germany, France, Great Britain and some other European countries.

Switzerland, having joined AIIB in 2015, became the ninth most significant non-regional stakeholder with a share of $700 ml. Switzerland’s contribution to the common cause is, however, rather modest.

Despite China—the creator and key stakeholder of AIIB—made a pledge that all participants would have equal rights, its share in the organization amounts to 50%. With such participation interest, Beijing has de facto a full control over the bank’s operations and can use AIIB in its political pursuits.

As for Switzerland’s decision to join AIIB, it was lured by the prospects of obvious advantages from cooperation with China, which, had the Swiss party ignored this important global initiative, would have slipped through its fingers.

The fact that other developed European countries, such as the UK, France and Germany (Geneva’s traditional main opponent) became members of AIIB also motivated Switzerland to go ahead with the deal.

The course of development of mutual relations clearly indicates that Switzerland has a special significance for China, being sort of a springboard to the European economy. But China has more than one “stepping stone” to Europe.

The Celestial Empire is continuously expanding cooperation with the largest European economies and acts proactively promoting its currency on the global market. Another offshore yuan trading center similar to the one operating in Switzerland already exists in London. The number of deals in yuans in Europe is also on the rise. That undermines the positions of the US dollar and euro.

Experts forecast that the yuan might be named among the global hard currencies as early as 2017, and a few years down the road, it might catch up with and overtake the US dollar in terms of popularity. In November 2015, despite vigorous protests of Washington, the IMF adopted a decision to add the Chinese yuan to its basket of elite global currencies.

It looks like the time when the yuan becomes a full-fledged global reserve currency is just around the corner, thanks largely to China’s European partners, including Switzerland—a key global financial center, yielding in significance only to the US and UK.

Money is the not the only tool that China is planning to use in its pursuit to conquer Europe. It has been extending the New Silk Road westward, which means that soon European markets might see an unprecedented influx of Chinese goods.

Once Mao Zedong said that China had “fingers long enough to grab India.” At that time, he was talking only about a few small states located on the Indian border.

Using the same figurative language today, China is working hard to grow fingers long enough to grab Europe and snatch it out of the hands of the US. Europe, dazzled by endless opportunities from cooperation with the powerful Chinese economy, actually, does not mind.

But the US is, of course, not too enthusiastic about such scenario. Apparently, China has more ambitious plans than squeezing the US only out of the Pacific Rim.