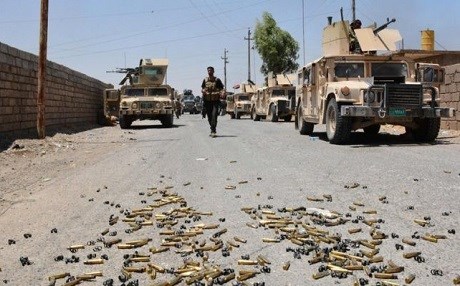 Qayara airfield, littered with spent shell casings, was retaken by Iraqi forces on July 9. Photo: Mahmoud al-Samarrai/AFP
By Rudaw 8 minutes ago
ERBIL, Kurdistan Region—The United States is spending more than $20 million to rebuild Qayara airbase, according to an Iraqi member of parliament.

“The US cares a lot about rebuilding the Qayara military airbase, south of Mosul, to make it a base for Iraqi planes involved in the liberation of Nineveh from ISIS [Islamic State],” Haneen Kado, MP from Nineveh, told Almada Press on Wednesday.

“The US allocated a budget to rebuild the base which reaches more than 20 million dollars. They chose that base because of its strategic location near to the operations area in Nineveh and its surrounding areas, and the base will be ready in a month,” he added.

An American team assessed the airbase and found it heavily damaged but are bringing in a team of experts, including “engineers who can go onto the airfield and enable runway operations,” said Air Force Col. Patrick Ryder, a spokesperson for US Central Command.

“The operation to liberate Mosul is related to an order from the global coalition, joint command and chief of the Iraqi armed forces. The return of the Qayara base will facilitate military movement as it is close to Mosul city and its surroundings,” said Nahla al-Hababi, another MP from Nineveh, to Al-Mada Press on Wednesday.

The United States is contemplating increasing its troop numbers in the country in preparation for the liberation of Mosul. They have already announced a further 560 will be deployed, bringing the total American force in Iraq to about 4,600.

Just days after Ash Carter, US Defense Secretary, announced the 560 troop increase, US Army General Joseph Votel said even more troops may be necessary. “As we continue on the mission, I think there will be some additional troops that we will ask to bring in,” he told Reuters.

Ryder also floated the idea that more, specialized troops may be called for, depending on the situation.

“There is the possibility that we will need more forces, as evidenced by Qayara West where we need some additional US forces as expertise that the US provides very well and that is logistics and the ability to improve this airfield and enable it to become a logistics node,” he stated earlier this month.

He declined to confirm whether or not US aircraft would use Qayara airbase.

Qayara airbase is located about 75 kilometres south of Mosul and was retaken from the Islamic State on July 9.