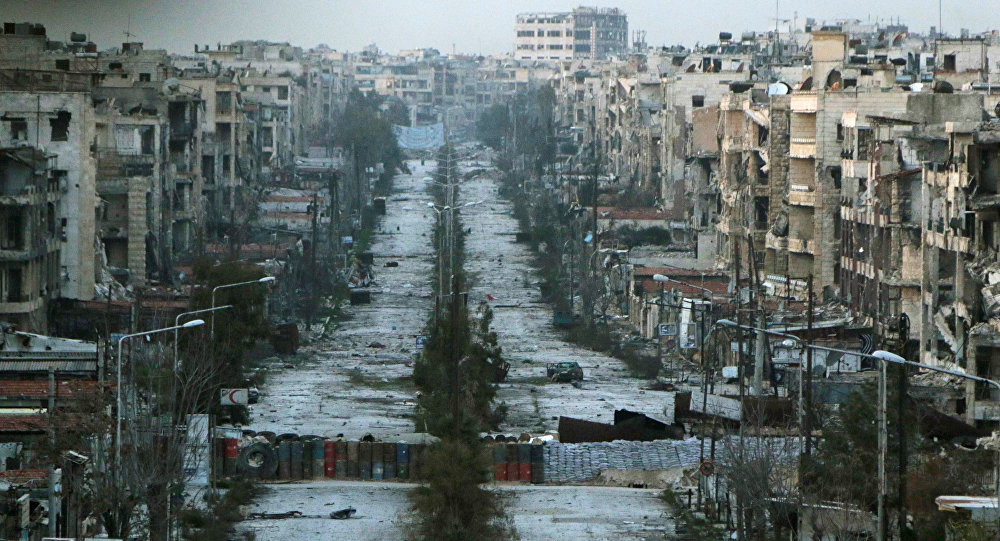 [ Editor’s Note: After months of the cease fire stalemate and jihadi counter offensives, the tide seems to be turning in Aleppo, in terms of cutting off their supply lines and ability to concentrate forces that allow them to attack in even traditional military size formations.

Despite the key contribution that the Russian air wing has made, I think the post analysis will show that they reduced the air contingent too soon at the critical time, and lost a lot of the momentum they had gained for Syria.

The West and its Gulf State allies won the ceasefire by dead ending the peace talks, while resupplying the battered jihadis with new supplies and more modern weapons.

All this was done of course as payback for Assad not stepping down, and Russia not pressuring him to. This was even more a fraud, as all the peace talk participants had agreed to engage with no preconditions. The people of Aleppo and northern Syria have suffered the most from the too early ceasefire miscalculation.

But maybe the momentum we see now, if sincere, for the US to agree to separate its “good terrorists” from the al Nusra bad ones will come to fruition. What adjustments Turkey will make is still up in the air for now, but with its hands full, with a huge post-coup purge, it may decide to cool things down in Syria. We will believe that when we see it… Jim W. Dean ] Russia and Syria are launching a large-scale humanitarian operation for Aleppo residents, Russia’s Defense Ministry said. Corridors for civilians and militants ready to lay down arms will be created to exit the city, which was Syria’s largest before the war.

“We have repeatedly called on the warring parties to reconcile, but the militants violated the silence mode each time, shelled villages, attacked the positions of government troops.

As a result, a tough humanitarian situation has developed in the city of Aleppo and its suburbs,” Russian Defense Minister Sergey Shoigu said on Thursday.

“To assist civilians taken hostage by terrorists, as well as militants who chose to lay down their weapons, the Russian center for reconciliation of the warring parties, together with Syrian authorities, will open three humanitarian corridors there,” Shoigu added.

“I want to emphasize that we are taking this step, first and foremost, to ensure the safety of Aleppo residents,” the minister said. He has also urged international organizations to take part in the humanitarian operation in Aleppo.

According to the minister, the fourth corridor for the passage of fighters in Aleppo is being set up only because the US has not provided Russia with data on the al-Nusra Front terrorist group, which has recently been attempting to merge with other armed opposition groups in Syria.
Russia is still expecting to receive data on the whereabouts of the moderate opposition in Syria, Shoigu noted.

By designating militants who share the same areas and positions as terrorists “moderate opposition,” the US is providing terrorists with a safe haven, Henningsen noted. He said that terror groups are benefiting from such neighborly relations in the same way they make use of civilians.

“The classification of moderate rebels is a type of human shield,” he said, adding that the lack of a clear signal from Washington to the rebel groups is the result of a deliberate strategic choice made by the US government, which wants the military conflict to drag on.

Some armed militant groups surrounded by the government army in Aleppo have declared readiness to lay down arms, a source told RIA Novosti on Thursday.

“Following a statement by the Syrian president [Bashar Assad] on amnesty [for surrendering militants], a number of militants have already expressed their willingness to lay down arms. I assume that in the coming days, the number of those wishing to follow [their example] will increase dramatically,” a source told the agency.

“Today as never before, joint action is needed in the fight against terror. Russia is ready for this, without any preconditions, and calls on everyone to unite,” Shoigu said.

“If we do not want a repeat of the Iraqi, Libyan, and Afghan scenario – the consequences of which have disentangled the world for quite a while – we offer our partners to unite, and instead of resorting to accusatory rhetoric, to focus on the implementation of the agreements reached in Moscow and Geneva last week,” the minister added.

At the request of US Secretary of State John Kerry, Russian experts have been sent to Geneva to work out joint steps designed to stabilize the situation in Aleppo, Shoigu said.

He stressed that “concrete joint action to destroy terrorism” is very much needed, adding that there should be no preconditions for talks.

“The Russian Defense Ministry is ready for such work,” Shoigu noted.

Earlier this month, Russia and the US agreed on “concrete steps” to ensure a long-term ceasefire in Syria and fight their common enemies, al-Nusra Front and Islamic State.

“We believe that those who remain in the positions occupied by [IS and al-Nusra Front] terrorists, despite numerous months of calls to leave [the areas], don’t differ much from terrorists,” Foreign Minister Sergey Lavrov said after meeting with Kerry in Moscow.

When asked whether battling al-Nusra could harm anti-Assad forces, Lavrov pointed to Afghanistan and Libya, where getting involved with extremist forces brought nothing but chaos.

“They thought that the Mujahideen would inflict maximum damage on the Soviet Union in Afghanistan, and then they could be ‘tamed.’ But ‘taming’ did not work. Al-Qaeda, which was born from the Mujahideen, attacked New York on September 11, 2001…”