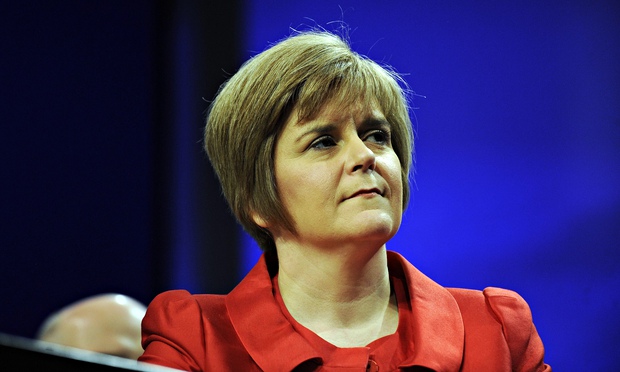 A month on from the Brexit vote and Scotland’s EU-smitten First Minister, Nicola Sturgeon, continues to stamp her foot in frustration.  But hopefully, after her frantic tour of European capitals pleading for Scotland to remain a vassal of the EU one way or another, the absurdity of her stance is beginning to dawn on her. She’s a little less strident, a touch more subdued.

Nevertheless the two-times loser is still viewing the future through a wonky SNP prism, still pulling every trick and still straining every sinew to impose her peculiar brand of independence on Scotland, claiming it’s in our best interest.

As in all wars, including a domestic bust-up like this, it starts with fanatics who are determined to impose their bad ideas on good people. Truth soon flies out of the window. Dr Stuart Waiton of the Defend Democracy in Scotland Campaign is reported in the Scottish Daily Mail berating Scotland’s parliamentary system. “Every excuse, angle or accusation is being exploited in an attempt to derail the vote to leave the European Union.” He reminds us that over 1 million Scottish voters opted to leave but are unrepresented in the Scottish Parliament, where all party leaders support staying.

So when Ms Sturgeon talks about a democratic deficit at Westminster she needs to consider the situation right under her nose at Holyrood. Meanwhile some of the remarks in her latest big speech are pretty bizarre….

The EU referendum, she says, was called “not because of any public appetite”. Untrue. The British people, including Scots, were never consulted about joining the EU in the first place. In 1975 we agreed to join the EEC, a straightforward common market and customs union.  You could say we were “dragged” into the EU in 1992, a different beast altogether, by our political élite against our will or at least without our permission. By 2016 we were thirsting for our democratic right to have a say and, if agreed, re-set the UK’s position.

She harks back to the independence referendum she recently lost: “In 2014, we voted to stay part of a UK that was a member of the EU.” Not true. The Prime Minister had already pledged a referendum on EU membership. Scots voted to stay with the United Kingdom knowing perfectly well that our future might soon be outside the EU.

In the speech she insists yet again: “We [Scotland] voted to remain.”  No, we didn’t. The UK as a whole voted to leave. That was the answer to the single question put to everyone. It was so simple it could not possibly be misunderstood. Asking Scots if Scotland should stay in the EU while the rest of the UK pulls out is a very different proposition with frightening implications and dire connsequences.

It’s “wrong to deny EU nationals a vote”, she says in the belief that the 3 million non-British EU citizens living or working in the UK would have swung the result in favour of staying. Does she not understand that issues affecting Britain are for Brits not foreigners to decide?

She talks of the need for solidarity with EU states to protect social benefits and collaboration on security and suchlike, as if they’ll be snatched away by Brexit. Anyone would think she is the only UK leader who cares about safeguarding the ties and relationships we value. Mutually beneficial channels are almost certain to remain open. In a sane world why wouldn’t they?

“The absence of any leadership and the lack of any advance planning…  must count as one of the most shameful abdications of responsibility in modern political history”. Here at least we can all agree with Ms Sturgeon. Such shocking incompetence by Westminster is unforgivable. All the more reason for her to help fill the vacuum and play a positive part post-Brexit as a member of Team UK, upholding the people’s collective decision and pulling things together instead of tearing them apart.

Her concern about “jobs and the economy” is less convincing, especially as there’s a notable shortage of industry experience among her own ministers and Scotland’s administration happily hands out licences to exploit onshore and offshore wind resources to foreign developers and operators instead of nurturing home-grown skills and enterprise. I have yet to see a coherent plan from her administration to regenerate Scottish industry.

The SNP troops under Ms Sturgeon’s control at Westminster – 56 bonnie lads and lassies – have assumed the role of main Opposition while Labour self-destructs. While they do indeed hold the Government to account on numerous issue they give the impression they’re there mainly to kick the Tories and sink the Union… that’s the same Union for which millions have given their lives and Scots especially have been unstinting in their sacrifice. However much the Tories deserve aggravation, the British people and our precious union don’t.

“I’m a life long nationalist,” says Scotland’s First Minister. “It may well be that the option that offers us the greatest certainty, stability and the maximum control over our own destiny, is that of independence.” When Nicola Sturgeon says independence she doesn’t mean real independence. In the same breath she’s pledging to explore all options to keep Scotland in the EU and threatening a second independence referendum if thwarted. So independence, in the SNP’s book, is a stepping stone to the very opposite. It’s a wacky sort of nationalism that jumps ship from an upbeat union like Great Britain to a faltering, authoritarian foreign collective like the EU. How would such a breakaway move fulfill the First Minister’s solemn oath to “well and truly serve Her Majesty Queen Elizabeth”?

As for the EU’s diktat on free movement of people, which Ms Sturgeon fiercely promotes and Brexiteers equally fiercely reject, it was doomed from the start and is unravelling fast as murder and mayhem sweep across Europe. If Scotland detaches itself from England and continues its open door policy with the EU we may find border posts at Carlisle and Berwick, armed patrols along Hadrian’s Wall and cash dispensers exchanging £s for euros. What a farcical end to our 300-year union.

Has Ms Sturgeon never considered raising her eyes and exploring the sunny uplands that lie beyond the EU while of course still enjoying the links already forged within it?

At the core of the independence nonsense is a long-standing grievance with England. Successive Westminster governments have played into the nationalists’ hands. It is long past the point where the political class on both sides of the border ought to have come to a necessary accommodation instead of fuelling the resentment and escalating to a level that makes it easier for some to pursue personal agendas.

I’m no expert on constitutional law but I’d be surprised if there isn’t a clause somewhere in that mountain of words warning that well and truly serving the Queen does not include dismantling her realm.