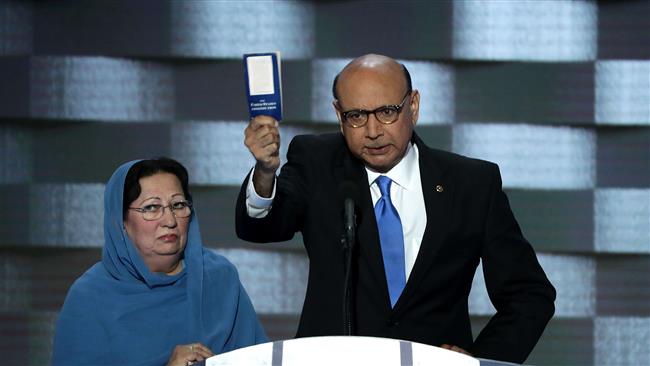 The father of a Muslim American soldier, who was killed during the Iraq war, has blasted Republican presidential nominee Donald Trump’s belligerent rhetoric about Muslims and immigrants, saying he has not “even read the US Constitution”.

Khizr Khan, the father of late Captain Humayun Khan, made the scathing remarks at the Democratic National Convention on Thursday night, training his rebukes at Trump’s proposal to ban Muslims and immigrants entering the US.

“Donald Trump consistently smears the character of Muslims. He disrespects other minorities, women, judges, even his own party leadership. He vows to build walls and ban us from this country,” Khan said.

“Donald Trump, you are asking Americans to trust you with our future. Let me ask you: Have you even read the United States Constitution? I will gladly lend you my copy,” he added.

Khan, whose son died in a car bomb attack in the Iraqi capital of Baghdad in 2004, described his family as “patriotic American Muslims with undivided loyalty” to their country.

“Have you ever been to Arlington cemetery? Go look at the graves of the brave patriots who died defending America – you will see all faiths, genders and ethnicities. You have sacrificed nothing and no one, We can’t solve our problems by building walls and sowing division.” Khan said, referring to the US military cemetery in Arlington County, Virginia, where his son is buried.

The comments were sparked after the Republican nominee in his acceptance speech delivered at his party convention last week implicitly pointed out to the banning of Muslims from entering the US.

“We must immediately suspend immigration from any nation that has been compromised by terrorism until such time as proven vetting mechanisms have been put in place,” Trump said.

This is while Hillary Clinton, the Democratic presidential nominee and former secretary of state, at her party convention paid tribute to Khan’s son, saying: “A president should respect the men and women who risk their lives to serve our country – including Captain Khan, and the sons of Tim Kaine and Mike Pence, both marines.”

As part of his concluding speech, Khan expressed his unfaltering support for Trump’s Democratic rival, saying, “I ask every patriot American, all Muslim immigrants, and all immigrants, do not take this election lightly. This is a historic election. And I request to honor the sacrifice of my son. And on election day, vote for the leader, Hillary Clinton, not the divider.”

The New York businessman’s campaign has been marred by his disparaging remarks against minorities in the US. His comments include a call to ban all Muslims from coming to America as well as forced deportation of Mexican migrants by building a long wall along the US-Mexico border.

He has also sought for a database to track Muslims across the United States and said that the US would have “absolutely no choice” but to close down mosques.

Trump’s proposal has been condemned by Muslim and human rights groups as well as his Democratic rivals and many of his Republican proponents who describe the proposal as divisive, counterproductive and contrary to American values.