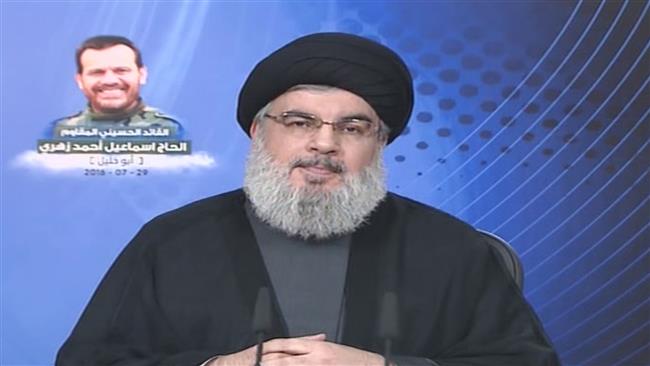 Hezbollah Secretary General Seyyed Hassan Nasrallah has censured Saudi Arabia for a recent visit to Israel by a delegation headed by a former military general.

Nasrallah said on Friday that the Riyadh regime is normalizing its ties with Israel “free of charge” and “without any benefits for Palestinians.”

“Saudi Arabia is setting a dangerous example for other nations in establishing ties with Israel,” he added.

The Hezbollah secretary general went on to say that any Saudi-Israeli relations will be followed by the Arab kingdom’s recognition of the Israeli regime.

Anwar Eshki, the former Saudi military general, and other Saudis made the visit last week during which they met a senior Israeli foreign ministry official and a number of Knesset members.

Saudi Arabia and Israel have no official relations and the kingdom prohibits its citizens from traveling to Israel. However, there has been no dearth of news about a rise in engagement between the two sides under the new Saudi rulers.

The Hezbollah leader also expressed regret that the issue of Palestine “has become a trivial matter among some Arab nations in recent years.”

Nasrallah was speaking during a ceremony to commemorate Ismail Ahmad Zahri, a commander of the resistance movement who passed away last week due to an illness.

He said Zahri represented the first generation of fighters who joined the resistance movement.

“Zahri was one of the commanders who contributed greatly to Lebanon’s victory against Israel in the war of 2006,” Nasrallah said, adding that he “never neglected his duties despite suffering from illness.”

Nasrallah said that the resistance movement is “certain about victory with such devoted commanders as Zahri.”

Elsewhere in his remarks, the Hezbollah leader slammed the Riyadh regime for its support of terrorism and waging a deadly war against impoverished Yemen since March last year.

More than 9,400 people, including many civilians, have been killed and at least 16,000 others injured since the onset of the aggression.

Since February 14, 2011, thousands of anti-regime protesters have held numerous demonstrations in Bahrain on an almost daily basis, calling on the Al Khalifah rulers to relinquish power.