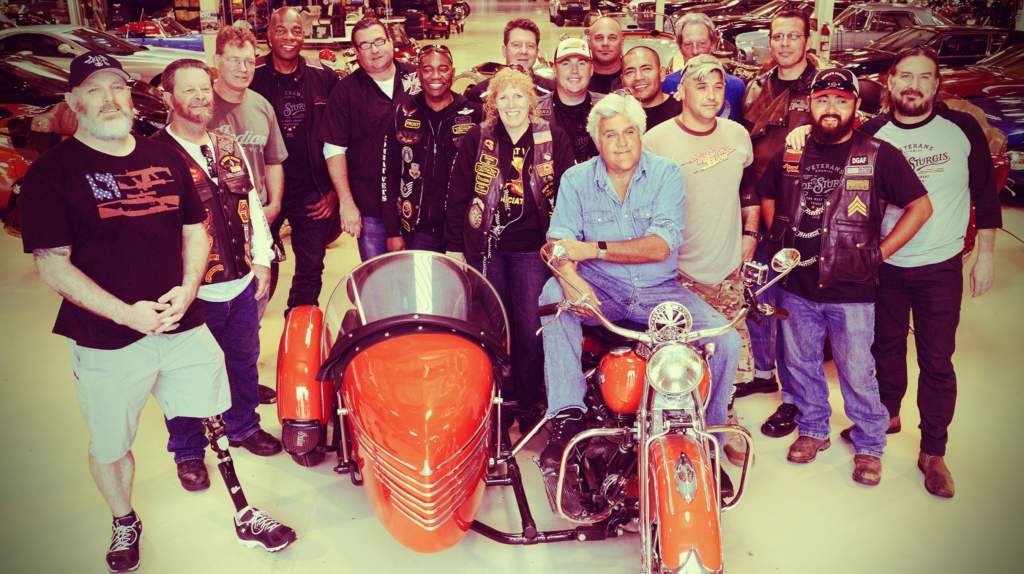 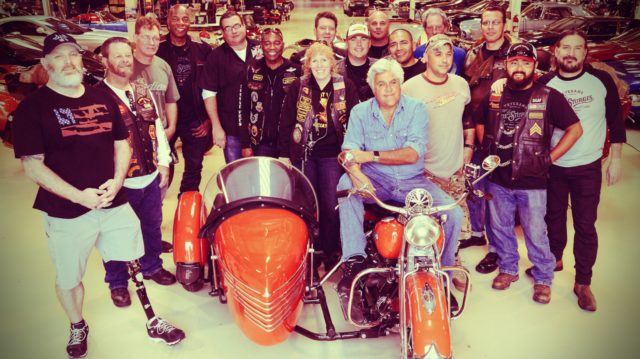 LOS ANGELES – July 29, 2016 – Comedian and host of Jay Leno’s Garage, Jay Leno, will serve as honorary chairman for Veterans Charity Ride and its new year-round motorcycle therapy program. Leno first became involved with the organization during its inaugural ride last year when he hosted veterans at his garage in Los Angeles. The Veterans Charity Ride to Sturgis will kick off again this Saturday, July 30. Leno, a longtime motorcycle enthusiast, will support the veterans as they ride from Los Angeles to the 76th Annual Sturgis Motorcycle Rally in South Dakota. The ride provides motorcycle therapy to veterans as an outlet for post-traumatic stress (PTS) and other challenges associated with assimilation back to civilian life.

“This is the second year I’ll be supporting the Veterans Charity Ride, and I’ve already learned so much from interacting with these courageous men and women,” said Leno. “I’m very thankful to be part of such a worthwhile and life-changing event with heroes who share my passion for cars and motorcycles.”

In addition to Leno, actor Mark Wahlberg, another motorcycle enthusiast, has shared his support for Veterans Charity Ride. This year, Wahlberg created a personal greeting video, as well as a series of videos, announcing his support of the program and showing his gratitude to veterans for their service.

“I’m so inspired by the brave men and women I’ve met through Veterans Charity Ride, and it has been an incredible experience to work alongside them on such a great cause,” said Wahlberg.

“I am honored to be at the launch of the Veterans Charity Ride. These veterans have given so much to this country, and I am happy to support them as they take off for this life-changing ride,” said Trejo.

Founded by veteran Army paratrooper Dave Frey and Emmy-award-winning director Robert Manciero, Veterans Charity Ride, along with main sponsor Indian Motorcycle, treats veterans to the ride of a lifetime. During the 1,776-mile ride through the western United States, the participating wounded and amputee veterans not only ride together but also come together to share their experiences with one another. The ride ultimately serves as a mechanism for them to begin to heal, de-stress and find emotional balance through the brotherhood of riding. Recently designated as a 501(c)(3) nonprofit organization, Veterans Charity Ride will broaden its commitment to veterans with year-round support as an outlet for their stress, and create a way for them to bond with other veterans.

“As a veteran, I’ve used riding motorcycles as a way to alleviate stress for years. Many veterans, especially today’s younger veterans, suffer from PTS and Traumatic Brain Injury (TBI), and they need a positive outlet to help them cope,” said Dave Frey, founder of Veterans Charity Ride. “Motorcyclists will tell you that riding isn’t just a hobby; it’s an experience that deeply impacts you. I realized that motorcycle therapy could be that positive experience for veterans.”

Several veterans who have suffered traumatic amputations will also participate in the ride. They will ride Indian Motorcycles with sidecars donated by Champion Sidecar. The sidecars the iconic journey to Sturgis possible for riding enthusiasts who can no longer operate traditional motorcycles without modification, including veteran Marine Sean Carroll, who will join the ride for a second year as a mentor.

This year, the ride will make six stops, including Las Vegas and Denver, before arriving in Sturgis for the weeklong rally and its festivities. During the rally, the veterans will partake in the ultimate Sturgis experience, which includes riding as special guests during the Buffalo Chip’s Freedom Celebration Ride.

Located in La Crescenta, California, Full Vision Productions was founded in 1994 by producer/director Robert Manciero. Since then, it has grown into a full service production company and agency with 11 Emmy awards and several festival awards to their credit. Originally specializing in extreme sports, Full Vision Productions has expanded into commercial, promotional and documentary film work for networks, major corporations and government agencies. In 2015, Full Vision Productions launched the Veterans Charity Ride to Sturgis.

Veterans Charity Ride USA is a non-profit organization that uses Motorcycle Therapy to provide a healing and fun experience for wounded, severely injured and amputee veterans from all branches of service who need support. Veterans Charity Ride provides our veterans with Indian Motorcycles, Champion Sidecars and Trikes to ride through the most beautiful scenic back roads of this great country, exploring America, getting our veterans outdoors, connecting veterans with mentors and visiting with other veterans, groups and supporters.
For more information on this press release visit:
http://www.abnewswire.com/pressreleases/jay-leno-joins-forces-with-veterans-charity-ride-for-a-second-year_72925.html