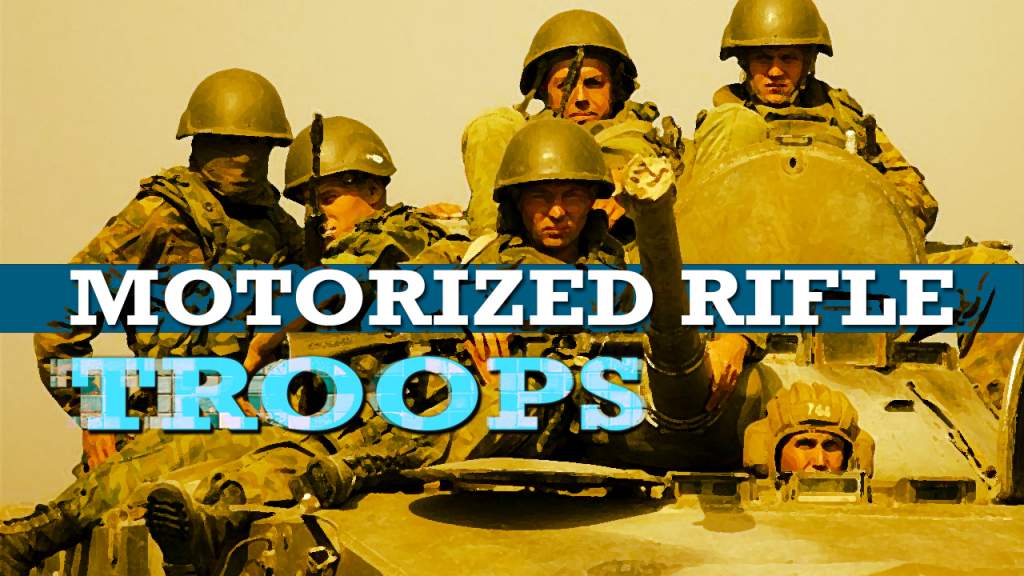 The Motorized Rifle Troops represent the third tier of Russia’s ground combat capability. Special operations troops, or spetsnaz of various types, are used for covert or irregular warfare. The Airborne Forces and the Naval Infantry are the “forced entry” specialists, but can also provide larger units of elite soldiers to engage in conventional ground combat. Motorized Rifle Troops, on the other hand, are the backbone of the Russian Ground Forces. Their task is heavy and sustained ground combat, with support by other combat arms, such as armor, artillery, and combat aviation.

Their frontline strength is represented by some 22 “permanent readiness” brigades. Each brigade’s organization resembles that of a motorized rifle regiment, in that it includes one tank battalion, 3 motorized rifle battalions, plus up to three artillery battalions and generous provision of service support units. This enabled individual brigades to operate as self-contained, independent battlefield formations without requiring much support from higher formations, such as corps or army, in contrast to motorized rifle regiments which operated only as part of divisions and relied on support from divisional-level units.

In the event of a major high-intensity conflict that could not be resolved by the regular army, the task of the permanent readiness brigades would be to act as a screen behind which the mobilization of reserve motorized rifle divisions, which have been reduced to the status of military bases, would be carried out. This is an invisible but important part of Russia’s defensive potential, which historically has relied on the ability to out-mobilize its, in paper, more powerful adversaries. The fact that the Russian Federation still practices the draft means that there is a large number of recently discharged soldiers who, if need be, could be recalled back under the colors. In recent years, the Russian government updated its legislation governing the status of the reserves and conducted a larger number of test mobilizations of reservists, which is an indication that aspect of military modernization is not being ignored either.

Motorized Rifle Troops’ training in recent years has benefited from a larger number of field exercises, and the commissioning of the 333rd Training Center in Alabino, which allows entire motorized rifle brigades to receive highly realistic unit training.

The recent events in Ukraine and other parts of the world have shown that the Russian military’s “new look” that was propagated by Defense Minister Serdyukov on the assumption that the West would accept Russia as an equal partner (assumption which also led to the ordering the Mistrals at French shipyards) has become obsolete, which among other things meant that the Motorized Rifle Troops required an upgrade to their capabilities. The fighting in Ukraine as well as large-scale maneuvers and simulations in Russia revealed that independent brigades are not well suited to sustained high-intensity combat and do not represent an efficient use of resources. This led to the decision to reactivate several motorized rifle divisions whose organization appears to follow that of the Soviet-era, with three motorized rifle regiments and one tank regiment each, supported by an artillery regiment and other units.

Moreover, Motorized Rifle Troops are receiving significant attention when it comes to their equipment. Their effectiveness will benefit enormously once these units begin to receive the Ratnik equipment suite, including upgraded or new assault rifles. Their armored vehicles are similarly in process of being upgraded or replaced. The most important change in that area was the introduction of the BTR-82A, which is an upgrade of the BTR-80 that features an unmanned turret equipped with a 30mm automatic cannon. Battalions equipped with the BTR-82A boast a high level of strategic mobility due to their airtransportability and the ability to cover large distances by road more rapidly and with less logistical support than battalions equipped with tracked vehicles. The Ground Forces also ordered about 300 upgraded BMP-3 infantry fighting vehicles and have evaluated a number of modernization proposals for existing several hundred vehicles. In the upcoming years, Motorized Rifle will begin receiving the brand-new Kurganets and Bumerang tracked and wheeled infantry fighting vehicles which made their public debut at the 2015 Victory Day parade. These vehicles represent the state of the art of infantry fighting vehicle design and will ensure Russian motorized rifle battalions will, if it comes to that, enter future battlefields riding highly mobile, well protected, and heavily armed vehicles.