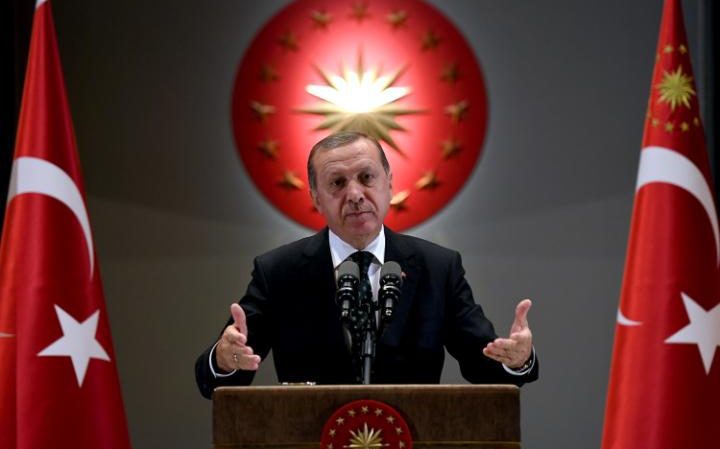 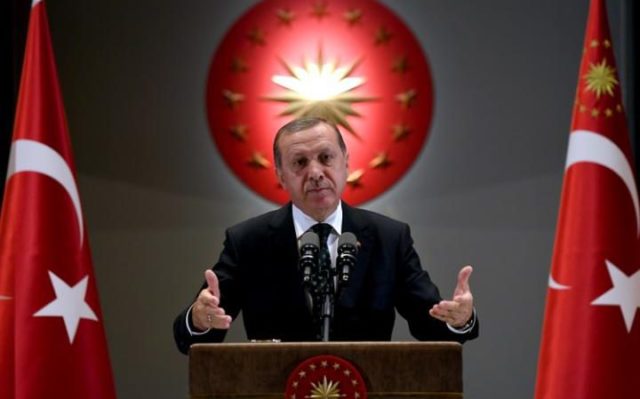 [ Editor’s Note: Erdogan’s counter coup rolls forward, using the failed recent one to eliminate any snowball’s chance in hell of their ever being another one. Some still pose that the lightening speed of the coup purge shows extensive pre-planning, and hence the coup was a staged one or allowed to continue.

But evidence has emerged that the complicated coup plan was discovered and began to fall apart as soon as it started, and it have nowhere near the support needed within the military to succeed, something that a major foreign supporter would never have allowed to roll forward.

And the reason for that is what we are seeing now, where most of the top officers being removed are those that the US and NATO worked the closest with in NATO. Of course both would obviously be working closely with the top command, so we will have to wait and see who is left standing to measure that reality.

But the US is definitely in the cross hairs and the thinly veiled accusations are increasing, with this past week’s Turkish claim of not only CIA but FBI “assistance and training” with some of the coup plotters close to the Gulen group. That also has to be taken with a grain of salt as that groups operates world wide and has been widely accused of being an CIA asset using the Gulen mosque and madrasa school  network as a not very undercover spying and destabilization  network.

At some time Turkey will have to start putting some proof on the table, and this week it hinted that is surely has it with a top prosecutor making the claims on the FBI and CIA training. Turkey will not hold  its cards on this forever, but then again it might we using what it could reveal to have some influence on US policy. I think they call it blackmail… Jim W. Dean ]

Turkey’s President Recep Tayyip Erdogan has ordered a cull of 1,400 army personnel for alleged links with this month’s failed coup, and stuffed the top military council with his political allies in a bid to impose greater control over the army.
The measures come less than a day after Erdogan ordered the closure of military academies – labeled as breeding grounds for discontent – and reassigned control of the army to the defense ministry, a civilian body.

The 1,389 members of the army, who were mostly officers, were accused of links with Fethullah Gulen, the exiled preacher Erdogan blames for orchestrating the abortive putsch on July 15.

A total of 1,700 personnel – including 40 percent of the country’s top officers – had already been dismissed for alleged involvement with the violent takeover attempt, which resulted in over 200 deaths.

Recep Tayyip Erdogan talked about the looming overhaul in an interview broadcast by the Turkish TV channel A Haber on Saturday. The changes will significantly affect military education, as all of Turkey’s military schools will be shut down and replaced by a National Defense University that will supply high-skilled military specialists to all three branches of the country’s armed forces – the army, navy and air force.

“We will bring graduate education instead of military academies,”Erdogan told the broadcaster, while promising that the new legislation will be published in Turkey’s Official Gazette on Sunday.

Moreover, Erdogan revealed that a decree is being prepared that would make Turkey’s armed forces directly subordinate to the country’s defense minister, while the chief of general staff and Turkey’s state spy agency, the National Intelligence Organization (MIT), would answer directly to the president.

“Our armed forces will be much stronger with the latest decree we are preparing,” Erdogan argued. He admitted that the night of the failed coup attempt had revealed “serious weakness of intelligence.”

In order for the decree to become law, Erdogan will have to gain the support of opposition parties in order to pass new constitutional amendments broadening his presidential power.

In addition, the Turkish leader said the gendarmerie security forces will undergo serious cuts, while their weapons and ammunition will be upgraded to enable them to fight terrorism more effectively.

The gendarmerie, which is a branch of the Turkish army, is tasked with ensuring internal security. Its forces have regularly been engaged in Turkey’s southeastern regions to stifle Kurdish unrest in the area.

At the same time, Erdogan claimed he had already ordered his lawyers to drop all lawsuits filed for personal insults. It is estimated that some 2,000 cases were brought by Erdogan in the wake of the coup.

“As a milestone, I hereby withdraw all the cases filed for insulting me and forgive all the offenders,” he said while delivering a speech at the so-called Martyr’s Memorial Day, which was created to mourn the victims of the coup attempt.

The Turkish president also reiterated his accusations against US-based Gulen. However, he claimed the preacher is a “puppet” rather than a puppeteer, intimating that a “mastermind” had been behind Gulen’s alleged rebellion. The influential cleric rarely leaves his estate in the US state of Pennsylvania, where he has been living in self-imposed exile since 1999.

Earlier this week, a Turkish prosecutor alleged that Gulen’s supporters, who Ankara says are members of a “Fethullah Terrorist Organization,” had received training from American secret services in staging the foiled coup.

“The CIA and FBI provided training in several subjects to the cadre raised in the culture centers belonging to the Gulen movement. The operations carried out by prosecutors and security officials during the Dec. 17 process can be taken as a good example of this,” the indictment reads.

In the meantime, the Turkish government is continuing its clampdown on officials who have been allegedly implicated in the events of July 15. Erdogan put the number detained at 18,600 people, saying it was “a very substantial number of persons.”

Overall, over 60,000 public servants have been dismissed, including 43,000 working in educational institutions, which Turkish authorities claim have been infiltrated by Gulenists. On Saturday, 56 officials working in the country’s constitutional court were temporarily suspended pending an ongoing investigation into the coup.

In an effort to bar people who fear prosecution on coup-related charges from fleeing the country, some 50,000 passports have been cancelled by Turkish authorities.