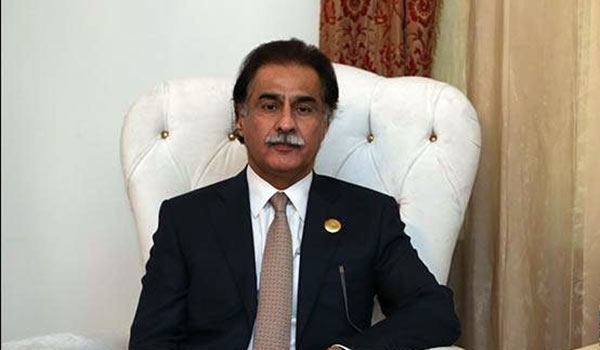 “We need to fight issues of terrorism and other issues together as we will not be successful individually, but collectively we can become a big force that can play a major role in fighting the problems that the two countries are facing and defeat the terrorists that enter our countries,” he said.

Sadiq went on to say that Iran is a big country in Asia and an extremely important neighbor of Pakistan.

In a relevant  development earlier this week, Iranian Interior Minister Abdolreza Rahmani Fazli and Advisor to Pakistani Prime Minister for Security Affairs Nasir Khan Janjua in a meeting in Tehran called for the expansion of security relations between the two countries, specially in fighting terrorism.

The Iranian interior minister and the Pakistani prime minister’s advisor explored avenues for bolstering and reinvigorating bilateral ties in campaign against organized crimes and drug trafficking.

Rahmani Fazli said that the terrorist groups, including the ISIL, are common threats to both Iran and Afghanistan.

The Iranian interior minister, meantime, called for cooperation between Tehran and Islamabad in border control, and said, “Iran sees economic development of border areas with Pakistan as a precondition to sustainable security.”

The Pakistani top advisor, for his part, said that terrorism is the common enemy of both Tehran and Islamabad.

Also in late April, a Pakistani military expert said Tehran and Islamabad are seriously determined to fight against the terrorist groups.

She reiterated that the Iranian and Pakistani navies can share each other’s experiences by conducting joint naval wargames.

“Iran and Pakistan have long common borders and expansion of military and security cooperation between the two countries not only helps secure the borders, but also plays an effective role in uprooting terrorism in the region.

“Iran and Russia have the needed capacities to broaden their  mutual cooperation in the defense field,” Brigadier General Madani said on Sunday.

The meeting was held after the official inauguration of the International Army Games 2016 in Moscow today.

Brigadier General Madani also voiced his satisfaction over the incumbent friendly relations between Tehran and Moscow.

The Russian defense minister, for his part, said that Tehran and Moscow are resolved to expand their defense relations.

In a relevant development on Saturday, Brigadier General Madani underlined that military relations between Iran and Russia will be further strengthened and enhanced.

The International Army Games 2016 are expected to facilitate strengthening of international cooperation among the armed forces of various countries, Brigadier General Vali Madani, also a member of the panel of judges at the Games, told reporters in Alabino region, Moscow.

“Iran’s Armed Forces have good relations with Russia. We are sure the competitions will strengthen them more,” Madani said, noting Iranian servicemen were newcomers at the Army Games although “they have fought in real battles and undergone proper training”.

“The competitions are held at a very high level. We are grateful to Russia for holding these very significant competitions. We are looking forward to winning them,” he concluded.

The Games are scheduled to take place between July 30 and August 13 simultaneously at 20 training grounds, where 19 of them are at three military districts: Western, Southern and Central: from Siberia to Kaliningrad in the West and from St. Petersburg to Sevastopol in Crimea.

Naval competitions are to be in the waters of the Baltic, Black and Caspian Seas. This year, unlike the previous years, the Games take place in two countries – Russia and Kazakhstan.

The Games’ program has 23 competitions in field, air and marine training. Eleven countries have sent their representatives to observe the competitions.