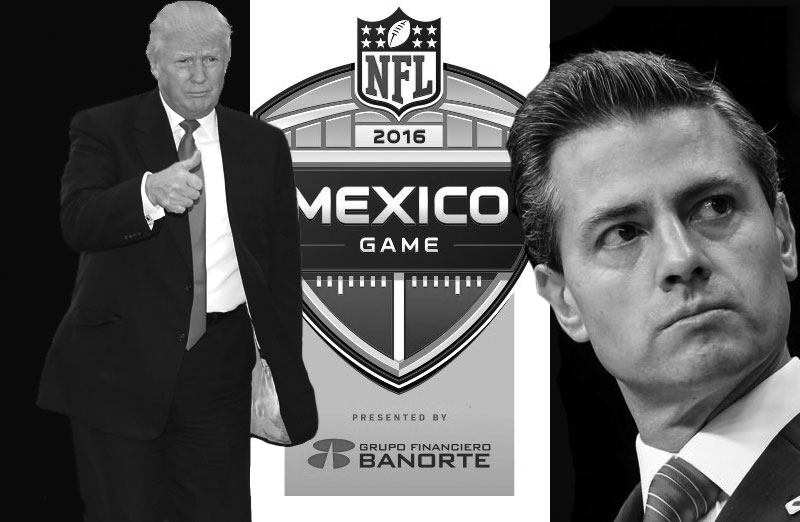 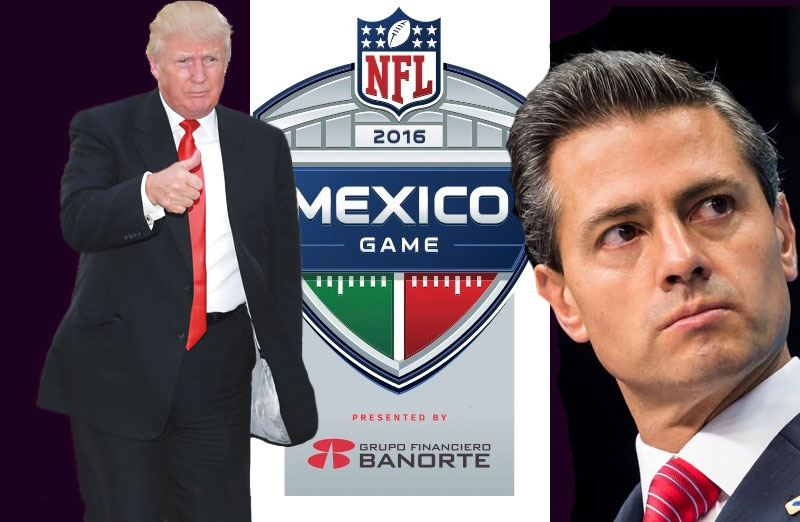 The USA elections are on November 8 and that means we will probably have a Madame President-Elect Clinton or a President-Elect Trump on their way to the White House by that time.

Now, if we get Madame President-Elect Clinton, then the game will go off as expected and the NFL will be thrilled along with the 120 million Mexicans.   The game will be super sold out with about 120,000.  Mexican fans will be doing the wave 1 hour before game time, holding tail gate parties, and enjoy the amazing game they have since the amazing Pittsburgh Steelers of the 70s inspired them to pick up the game, create Mexican College Football leagues and general make it one of the more popular sports in Mexico just behind Soccer (Futbol) and Baseball (Beisbol).

But what if the world gets a President-Elect Trump?

Clearly, when the NFL scheduled this game, their intent was purely business bridge building.  There is NO doubt the NFL is participating in moving forward to further connect our 21st century world.  And so there is NO way they could have seen this TRUMP isolationist reactionary movement that scapegoats the USA’s # 2 trading partner and it’s 120 million citizens.

But here we are…. a prime time NFL game with millions and millions watching around in the USA, Mexico and around the world.

We know that Mexicans love the game and the fans will be fired up.  That is very clear.

I mean, in 2005, we saw the two worst last place teams play in Mexico and Mexico responded by breaking the record for attendance to a NFL game, period!  Yes, in the whole history of the NFL, Mexico held the attendance record for a single game.  Now since then, Jerry Jones opened a new stadium in Dallas and, on opening day, allowed fans to stand in the halls to wrestle the record away from Mexico.  So now Mexico has the # 2 most attended game of all time.  But still that’s truly eye opening don’t ya think?

But if we get President-Elect Trump, will Mexico break that record again but not in a good way?

Trump has insulted the dignity of Mexicans and Mexico the country.

He insisted the Mexican government intentionally sends their Criminals to the U.S., called Mexicans killers, and kicked out the Mexican Walter Cronkite (Jorge Ramos) from a press conference and so much more insults and indignities that are just part of his Motis Operandi.

In Mexico, he is a hated figure who clearly is NOT invited to enjoy its beaches, business, and simple will never be allowed to participate in a future modern Mexico that is slated to be a # 5 economy in the world by 2030 surpassing Japan, England, France, Germany and Brazil.   He has already burned his britches and worn out his welcome.

His vitriol may have played well with predisposed racists, bigots and an uneducated class in the USA that looks the other way because they are so frightened and scared of the future, but in Mexico, a country of 120 million people, he is NOT appreciated in any way shape or form.  He represents the very worst character of the USA and not the true American diverse character that the USA has actually become; the generous, active, entrepreneurial, innovative, forward thinking, and investment willing that so makes up the American character.

Instead, Trump promotes his isolationist let’s go back to the way it was mindset that clearly will have NO seat at the future connected 21st century table.

It’s hard to say what the actual reaction will be if we get a President Trump.  I am sure the NFL has deep anxiety over it because their intent is amazing and their bridge building world class.  But Trump the Wrecking Ball has already ruined global relationships, diminished trust, and has insulted his way to being a world class mess.

I am 100% sure Mexico and the NFL want no part of this Trump spectacle.  But when there is a massively hateful divisive “I alone can fix it” fascist that demonizes millions upon millions of people, there is going to be a negative reaction.  We will have to brace for a global backlash which could be small and subtle or terribly loud and destructive to the economy of the USA.  We just don’t know because we’ve never openly declared war on the world like this before!

But what we do know is that if Trump is elected, it sure  appears that Mexico will be the first real test of the Trump Isolationist Hateful Racist Bigoted Xenophobic doctrine.  Let’s hope not but if so well, the USA will have to find a way to survive becoming a pariah country in a new 21st century connected world.