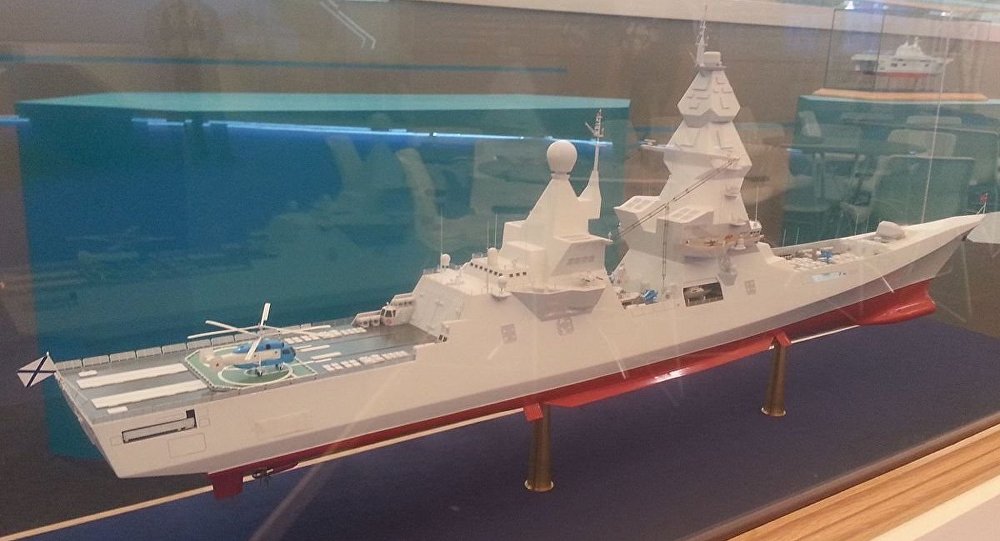 Russia’s Severnoye Design Bureau has started working on the Project 23560 Leader-class destroyer that will combine the features of a destroyer, large antisubmarine warship and guided missile cruiser.

The ship will most likely be nuclear powered. It will be capable of spending up to 90 days offshore without additional refueling or support.

“The Leader will be a universal ship, triple-hatted as a destroyer, large ASW ship and guided missile cruiser while being smaller than Project 1144 ships and carrying far more weaponry,” news publication The Defence Talk reported Valeriy Polovinki, advisor to the director general of the Krylov State Research Center that worked out the destroyer’s preliminary design military, as saying.

He further said that the self-contained operation of such ships is usually based on their stock of provisions and their nuclear propulsion plants can go on without refueling for years.

Meet the Leader: Russia to Build Destroyer That Will Outgun Largest US Warships

The Leader-class destroyers are expected to be equipped with Kalibr-NK cruise missiles and S-500 air defense systems.As exhibited by its mockup, the destroyer will be 200 meters long and 20 meters wide. It will be able to travel at a maximum speed of 32 knots.

The multipurpose warship will have anti-aircraft, anti-ballistic missile, anti-surface and anti-submarine capabilities.

It is meant to replace the Sovremennyy-class destroyers, the main anti-surface warships of the Russian Navy, as well as the Slava-class cruisers and the Udaloy I class anti-submarine destroyers.

It will further be equipped with P-800 Oniks supersonic anti-ship cruise missiles with a range of more than 300 kilometers. The Zircon hypersonic missiles could also be added to the arsenal.

The next-generation warship will also have a landing pad for two Kamov Ka-27 or Kamov Ka-32 helicopters.

The vertical launch systems (VLS) of the Poliment-Redut system will handle short-range aerial threats. The VLS will be controlled by the Poliment active electronically scanned array (AESA) radar system. The Leader may carry two modules of the navalized version of the Pantsir-M SAM/gun system.

“Finally the Leader will also get a 130-mm A-192 versatile gun. Overall, the destroyer’s weapons arsenal will include a total of 200 missiles,” Izvestia reported.

“Nuclear-powered cruisers that have the self-sustained operating capability and formidable weaponry can operate anywhere in the world. The Russian Navy has not ordered ships like that since 1989, which means that the country has regained geopolitical interests in remote corners of the world,” Russian news publication Izvestia reported former Russian Navy Deputy Commander-in-Chief Admiral Igor Kasatonov as saying.

Valery Polovinkin, advisor to the director general of the Krylov State Research Center which worked out the destroyer’s preliminary design, says the sophisticated ship will combine the best of several types of surface combatants at once.

Its antimissile and space defense capabilities will serve as a “kind of strong point in the ocean.”

Naval arms expert Alexander Mozgovoi told the publication that the final design of the Leader and its weapons arsenal may evolve considerably as the engineering design is being worked out.

Metal for the new warship is set to be cut in the beginning of 2018, according to the United Shipbuilding Corporation (USC). A series of eight destroyers is planned to be build.

According to the expert, such a large-scale program was chosen due to the exclusive problem with the Russian Navy’s import substitution, the lack of a domestic manufacturer of gas-turbine propulsion plants.

“On the other hand, nuclear ones are in production in this country, the success of the nuclear-powered icebreaker construction program being a good case in point. The Kalibr-armed Project 21631 ships, which received raving reports during the Syrian campaign, have short legs, with their endurance being within 30 days – approximately as long as it takes them to cruise from Murmansk to Gibraltar. Nuclear-powered destroyers have a virtually unlimited range,” The Defence Talk reported Mozgovoi as saying.

The ship will displace about 17,500 tons, which will make it close enough to Project 1144 Orlan-class heavy missile cruisers in terms of dimensions.

According to Igor Kasatonov, the development of such a destroyer ship implies certain geopolitical interests of Russia’s leadership, Izvestia reported.