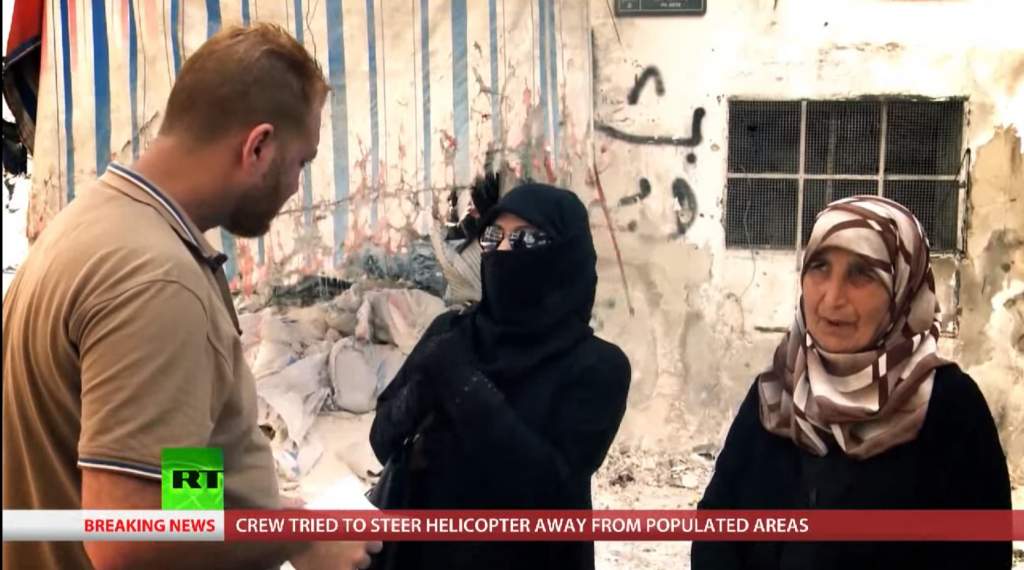 Men inspect the wreckage of a Russian helicopter that had been shot down in the north of Syria’s rebel-held Idlib province, Syria August 1, 2016.
A Russian Mi-8 helicopter has been shot down by ground fire in Syria following delivery of humanitarian supplies to Aleppo, the Defense Ministry said. Three crew and two officers from Russia’s Reconciliation Center died, according to a Kremlin statement.

“On August 1, an Mi-8 transport helicopter has been shot down by ground fire in Idlib province after a delivery of humanitarian aid to the city of Aleppo. Three crew members and two officers from the Russian Reconciliation Center in Syria were on board,” the Defense Ministry said in a statement.

The helicopter was returning to the Russian air base at Khmeimim, the statement added. The ministry has not yet revealed identities of those on board.

The Russian Reconciliation Center in Syria has operated at Khmeimim air base since February. It contributes to peace talks between Syrian government and moderate opposition factions not aligned with IS, Al-Nusra Front or other terrorist groups.

The center also oversees ceasefire agreements between belligerent parties and delivery of humanitarian supplies to various parts of Syria.

Kremlin spokesman Dmitry Peskov confirmed in a statement later in the day that all those on board are dead.

“Those on board the helicopter were killed, as we learned from the Defense Ministry’s report. They died heroically as [the crew] tried to divert the helicopter to minimize casualties on the ground,” Peskov said, adding the Mi-8 had been on a humanitarian mission.

“The Kremlin conveys its deep condolences to the families of those killed in action,” he added.

Shortly after the crash, a number of on-the-spot videos have emerged online, allegedly showing helicopter debris, including a tail rotor and parts of the fuselage. At the moment, RT cannot verify authenticity of those videos. 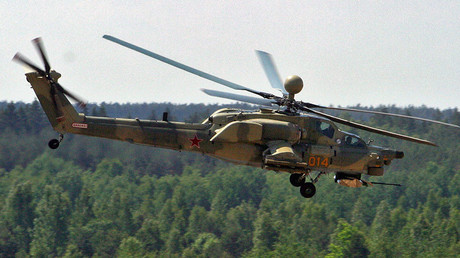 Last week the Syrian government and Russia launched an effort to evacuate civilians wishing to leave Aleppo, establishing safe corridors and providing food, medical assistance and transport for those who chose to use them. Scores of people, mostly women and children, rushed to abandon the battered city, which has been contested by several armed forces.

The Syrian opposition decried the move, claiming it was an attempt to depopulate the city, a part of which remains one of its strongholds.

“I’ve heard some local sources where the [Russian] helicopter was downed speaking of the possibility of MANPADs – shoulder-mounted surface-to-air missiles – being used in that context,” he said.

Portable surface-to-air missiles would be a game changer in the hands of the rebel forces, as they counter the Syrian Army’s air superiority. Providing such weapons would be a risky move for a foreign nation, considering the previous record of unintended weapons transfers.

It is the third Russian helicopter lost in action in Syria this year. In July, an Mi-25 attack chopper was shot down near Palmyra, killing two Russian pilots. The aircraft had been engaging the advancing Islamic State (IS, formerly ISIS/ISIL) militants at the Syrian Army’s request when it was taken down, according to the Russian Defense Ministry.

In April, an Mi-28N attack helicopter crashed while performing a flight near the city of Homs, with the Defense Ministry stressing it was not shot down. The crash left both pilots dead, with technical failure cited by Moscow as the likely cause of the accident.

Last October, another Mi-8 helicopter was badly damaged and then destroyed by IS fighters after an emergency landing in the middle of search and rescue operation to extract a surviving co-pilot of a Su-24M bomber jet shot which was down by a Turkish Air Force F-16.