Benjamin Netanyahu has just upset the State Department again. Ignoring international laws and peaceful resolutions, the mad man in Tel Aviv plans to build new units in the West Bank. This move, the State Department declared, “is systematically undermining the prospects for a two-state solution” with the Palestinians.[1]

White House spokesperson John Kirby himself has said: “We strongly oppose settlement activity, which is corrosive to the cause of peace.”[2] Hagit Ofran, director of the Settlement Watch team for the left-wing Israeli human rights organization Peace Now, declared:

“The fact that there are elections in the U.S. might be perceived in Israel as an opportunity to get away with things, but this is the Americans saying, ‘We are still watching you.’”[3]

Even Michael Oren, a former Israeli ambassador to the United States who said that Israel preferred terrorist organizations in Syria over Assad, has declared that Israel’s move “repeats its initial mistake in the peace process. It is creating a demand that no Israeli government can meet and no Palestinian leader can ignore.”[4]

No one can understand Netanyahu because he is living in a world in which reason plays no part. He does not want to subordinate his essentially Talmudic impulse to reason at all. He wants reason to conform to his political weltanschauung. That is one reason why the Obama administration called him “a chickenshit” in 2014.[5] “The Thing about Bibi is,” the administration said, “he’s a chickenshit.”[6]

Netanyahu, the official continued, “won’t do anything to reach an accommodation with the Palestinians or with the Sunni Arab states. The only thing he’s interested in is protecting himself from political defeat.”[7] Netanyahu, we were told, is “recalcitrant, pompous, and Aspergery.”[8]

Well, we have been saying for quite a long time that Netanyahu is mad and unruly because he has been operating under a system that is arguably diabolical. In fact, he made it very clear that the so-called legal system in Israel is based on the Talmud,[9] a book that has rejected Logos in all its manifestation.[10] 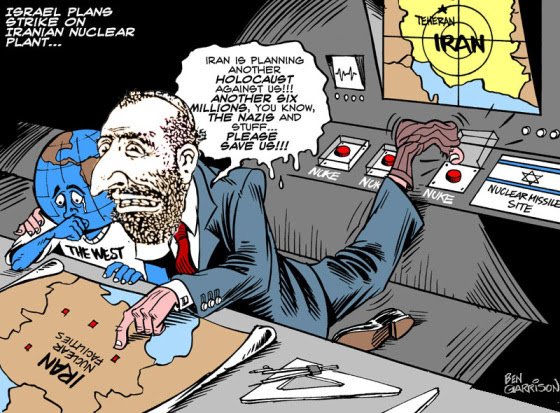 That is one reason why this man has been able to perpetuate lies and fabrications year after year. That’s one reason why even Ex-Mossad chief Meir Dagan called Netanyahu’s speech before Congress complete “bullshit.”[11] Dagan had more things to say: “In the Palestinian arena, [Netanyahu’s] policy will lead … to apartheid.”[12]

Well, Israel is already an apartheid state, and this is why it has rightly provoked moral reactions from people across the political spectrum. In response to the BDS movement in places like France, Netanyahu has recently said that those organizations deny “the state of Israel’s right to exist.” This is really bad.

Let’s take for granted the stupid premise that “Israel has a right to exist.” What about the people in Gaza? Do they have the right exist? What about Gilad Sharon saying that Israel needs “to flatten all of Gaza” and “entire neighborhoods,”[13] killing every single men, women and children? Can any nation has the right to exist outside the moral law?

Obviously Netanyahu is living in fear because he does not have a moral plumb line. This is one reason why former Mossad director Efraim Halevy declared last month that Netanyahu “is a fearmonger. I think he uses fear in a way which one should not use.”

Would Netanyahu call the former Mossad director an anti-Semite for saying the same thing we’ve been articulating for years? If not, then Netanyahu and the Zionist Mafia should welcome our critique. They should also agree to abide by reason and the moral and political order. They certainly cannot avoid to be living in contradiction on these issues at all. Cornel West himself said again:

“This is a moral issue. It’s an issue of our time. It has spiritual and moral implication—not just about politics, not just about the next election…We must never tolerate one iota of anti-Jewish hatred of sensibility and one iota of anti-Palestinian or anti-Arab or anti-Muslim sensibility. The Democratic Party has been in denial for too long. Palestinians ought to be free.”

“An occupation is evil, and if it is evil, how do we keep track of [Israeli and Palestinian] evil on both sides?” West moves on to add that if Hamas commits crimes “against Jewish brothers and sisters, then it’s wrong. When the IDF kills innocent people, over five hundred babies in fifty-one days, no matter how many shields they said Hamas uses, It’s wrong from a moral and spiritual point of view…

“The Democratic Party must tell the truth. We can never fully respect the Palestinians unless we can name what they are up against—the boot on their necks! It’s occupied territories. This has been said by every nation, except the Democratic Party. If we can’t meet [the test of truth], lo and behold, how are we going to deal with this ugly situation with precious folk on both sides, without some truth telling?”

I am again in complete agreement with West here. But West doesn’t seem to understand that Rabbinic Judaism, which provides the basis for the state of Israel, is metaphysically incoherent, philosophically repugnant, morally indefensible, and ultimately anti-Western. West is a former Princeton professor, and perhaps he needs to have dinner with his colleague Peter Schaeffer of the same institution.

Israeli officials, most specifically Benjamin Netanyahu, cannot frame their political ideas on reason and international laws because Rabbinic Judaism does not allow that possibility. That is why Israeli officials apply one standard for themselves and a completely different standard for everyone else. For example, the Israeli regime wants Iran to drop its so-called nuclear program, but Israel has hundreds of nuclear warheads; Israeli officials will not even allow international inspections![14] As Israeli military historian Martin van Creveld declared back in 2003:

“We possess several hundred atomic warheads and rockets and can launch them at targets in all directions, perhaps even at Rome. Most European capitals are targets for our air force…. We have the capability to take the world down with us. And I can assure you that that will happen before Israel goes under.”[15]

In short, Israel is worse than an apartheid state. The same terrorist state has spread its covert activity virtually all over the Middle East and much of the West.[16] As Gordon Duff pointed out last May, Israel, along with Turkey, almost brought the world down. They were not able to do so because they are not in control of history and human destiny.

If the universe is “is not prey to chance and external, contingent causes, but is governed by providence,” as Hegel pointed out, then this “divine providence” will triumph in the end. This is why we should all be optimistic in the midst of trials and troubles.

[9] Marissa Newman, “Netanyahu reported to say legal system based on Talmud,” Times of Israel, May 8, 2014.