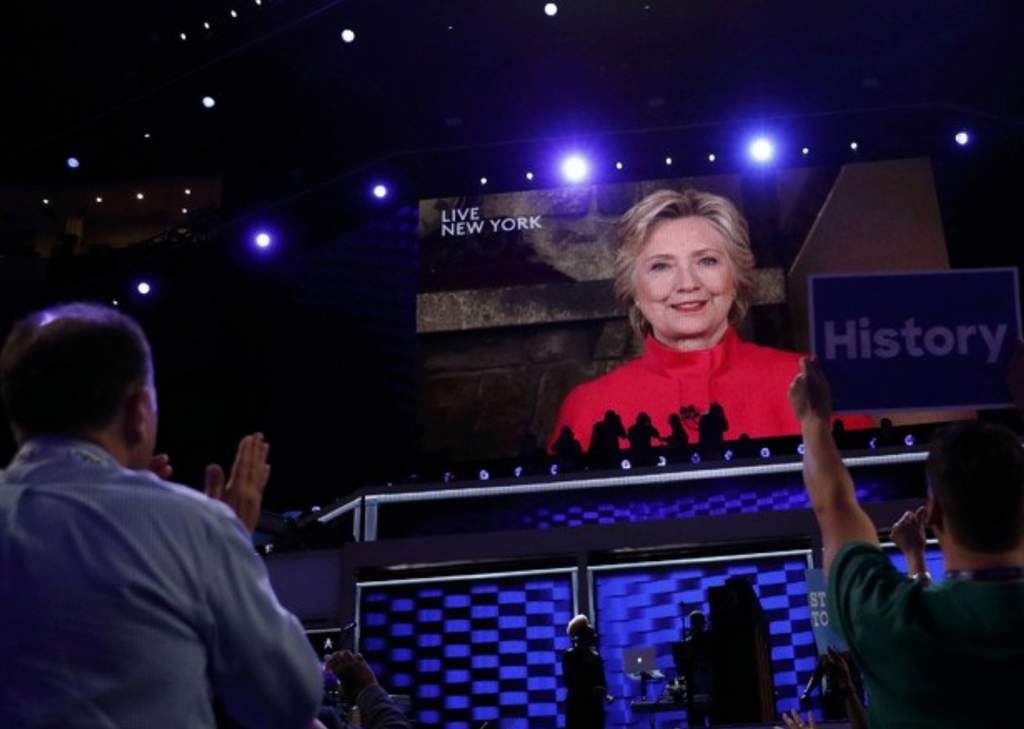 …by Gordon Duff, Senior Editor
Is Donald Trump insane?  Of course he is.  So is Hillary, any idiot can see she is drugged out of her mind, look at that gaping smile. Also, let’s be straight, Hillary’s obsession with Russia and Putin being the enemy, of destroying Syria, indicates that she is being handled by people divorced from reality.  She thinks the American people really believe this.  She has been around the rarefied few for too long, just like Trump.
These are no longer real people.  Hillary is closer, though she comes from Chicago “medium money,” went to the best schools and shows almost conspiratorial grooming, pushed to the top of the Democratic party early on, working on the Nixon impeachment and being named one of the top lawyers in the country though there is little record of what she did to deserve any of it.
Because of the stupid things Hillary says, I don’t trust her but I do believe this, that Bill Clinton makes the decisions around the house and I trust him implicitly.  Clinton could have cruised to a 3rd and 4th term like Roosevelt and nobody would have said anything were it not for Fox News and the Israel lobby.  They hated Bill for his support of Palestinian rights and they hate his wife for the same.
Is Hillary mixed up with the neocons?  Yes.  Should we worry?  Yes. As for her domestic policy, with the exception of gun control, it is very good, not “Bernie Sanders” good but quite excellent.
Trump’s is pure shit.  Where Trump shines is that his handlers cruise the conspiracy sites on the internet (we know this to be a fact) and give him daily quips based on site traffic and how bad the grammar is on the comment boards, the worse the better, as he has admitted from time to time.
I respect his hatred of the American people, he hates them (us) for our idiocy and has promised to punish us and make us suffer for being total assholes if we are stupid enough to elect him. I feel that way from time to time myself but then pick up a cat and pet it or walk the dog and that feeling goes away.  Other people drink.
Does Trump have a better grip on American foreign policy?  Yes.
America has no foreign policy.  Going conspiratorial on folks, quite frankly America appears to have no functioning government at all.  Trump at least notices this and expects to be killed or suffer from a rigged election like Gore and Kerry did and probably isn’t wrong.  However, those who rig elections may well be backing him with one exception, I don’t think they like either candidate.
We know this, Jeb and Kasich were supposed to be the GOP nominees, that was the “fix.”  I got that from the “detective club” boys some time ago.  Jeb and Kasich are WORSE than Trump, hands down.
This is the rub, can America survive a GOP president?  I think not.  I don’t care if the borders are closed or who Trump hates, not really.  I think the whole thing is an act anyway.  We need Al Gore brought back.  Past that Bernie Sanders has my support and past that, the best we can do is put Bill back as “first lady” and hope he slaps some sense into Hillary or keeps feeding her the happy pills.
Listen carefully, Hillary’s bizarre foreign policy statements are absolute proof that America is no longer its own master.  The shit she says is totally nuts and this lady was Secretary of State.  I am making this judgment based on better access to intelligence than those in DC are allowed to have and stand willing to prove that, face to face, with anyone on earth.  Debate me and find out.
I am not sure Trump means what he says when he talks about domestic issues.  He sounds like a total idiot.  Nothing he says makes sense and I suspect he isn’t very bright, so stupid in fact to even know he is stupid and too rich for anyone to be able to tell him.
Yet much of what he says about trade issues is very right as are other things as well and they should make sense to people but for one reason, he has no personal history of doing anything but partying and screwing everyone around him including and especially everyone who has ever worked for him at an hourly job.
I understand his tax cheating, that’s business but how he runs his buildings, his casinos, that’s something else.  He can’t be trusted, he has no respect for work, for human rights, for those that make the money for him.  He shows no signs of liking anyone but Eastern European “models.”
I can understand that too, frankly and don’t damn him for not marrying a power divorce lawyer and having his personal peculiarities, we are all allowed that.  I do have a moment, however, when someone decides, out of the blue, after a life of doing nothing for anyone, that the rest of us can benefit from leadership and wisdom supplied by someone who has shown no evidence of having either.
From RT:
Donald Trump says November’s US presidential election “is going to be rigged,” making the claim twice on Monday. The property tycoon also called his rival Hillary Clinton “the Devil,” adding that the system was also rigged against Bernie Sanders.
Donald Trump says November’s US presidential election “is going to be rigged,” making the claim twice on Monday.
The property tycoon also called his rival Hillary Clinton “the Devil,” adding that the system was also rigged against Bernie Sanders.
The Republican presidential candidate first spoke at a town hall event in Columbus, Ohio, where he said that election on November 8 might be “rigged.”

“I’m afraid the election is going to be rigged, I have to be honest,” the Republican nominee told the crowd, as cited by AP. He added that he has been hearing “more and more” that the election may not be contested fairly, though he did not give any further details.

He reiterated his claims using even stronger language during an interview with Fox News on Monday evening, in which he told Sean Hannity “the election is going to be rigged,” while also calling on Republicans to watch proceedings “very closely.”

Trump took a swipe against certain members of the Republican establishment, saying that despite the primary campaign against him being slightly rigged, he still managed to win “in landslides.” He also claimed that Sanders, who was defeated by Clinton in the Democratic race, also faced an unfair battle as the establishment was against him.“I think it was rigged against Bernie Sanders with his superdelegates nonsense,” Trump said.This is not the first time that Trump has accused the system of being rigged against Sanders.

During his speech in Ohio, Trump said Sanders had “made a deal with the Devil” in reference to Clinton, adding that “she is the Devil” after the Vermont senator agreed to back the Democrat nominee.