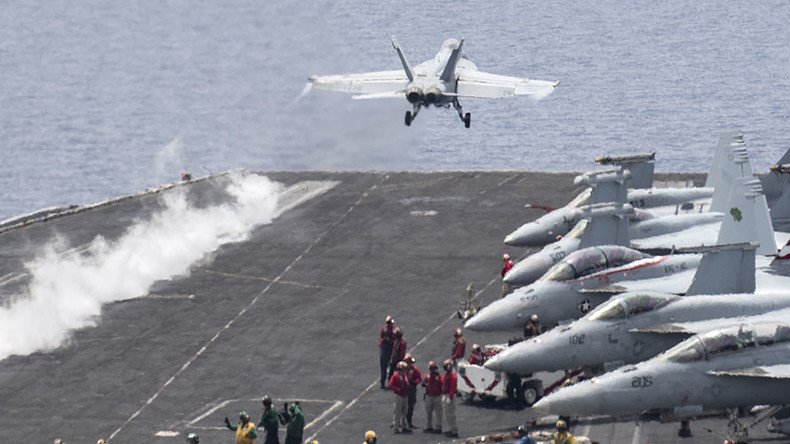 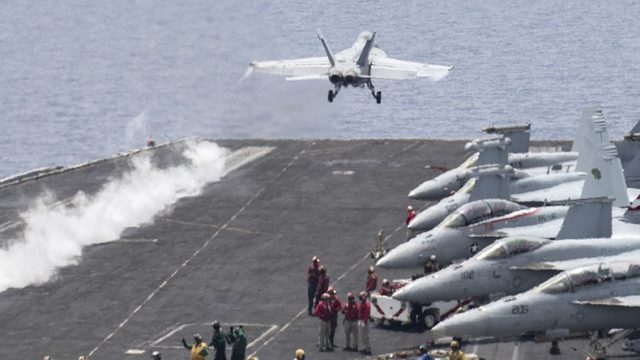 Last month protests erupted in Libya over French military operations conducted inside the country without local authorities’ consent. On Monday, Libyan officials said with much fanfare and pride the US had started bombing Sirte.

The coastal Libyan city – Gaddafi’s hometown – turned into an IS stronghold following his forceful removal in 2011.

What a mess Libya truly is in. Its corrupt leadership, placed at the helm of the country on the back of a brutal NATO onslaught that transformed the formerly stable country into one of the most troubled spots in Africa, is now welcoming bombing raids on the destroyed town.

While the aim of the operation is hard to predict since IS fighters have dispersed, the raid does come at an interesting time.

Since Gaddafi’s ousting and the country’s rapid descent into chaos and lawlessness, many Libyans have been eager to see a return of the old guard, known as the ‘Green’ Libyans in reference to the slain leader’s manifesto and flag during the years of the people’s republic or ‘Jamahiriya’.

The return of the Greens to the political fore has been troublesome for those Libyans who are in power thanks to NATO and who have since been busy emptying the country’s coffers.

As the former leadership crumbled under the weight of a six month-long bombing campaign, banks and state-owned companies were raided by new Western approved officials brought in to take over.  In those dying days of the Gaddafi era, they endeavored to rid the country of its vast wealth, channeling much of it to foreign accounts where monies are still held today.

As Libyans demand a return of the previous leadership, the new order is nervous. No doubt a return of the Greens would lead to a purge in the government ranks of all those who collaborated with the Western-led coalition that transformed Libya into rubble and turned many of its cities into IS-held towns.

A return to the previous order would also indicate that what was hailed as a “revolution to remove a brutal tyrant” was a propaganda operation solely aimed at regime change and a chance for Western capitals to rid the African country of much of its precious commodities, namely oil.

Gaddafi’s son, Saif, in captivity in Zintan for over five years, and said to have been released in April, is being touted for a prominent role in Libya’s future after it was revealed his captors would pardon him after he was sentenced to death by a court in Tripoli.

The message aimed at the international community is clear: Libyans want to see a return of the Greens to power.

The presence of the French army in Libya, only revealed after three of its soldiers were killed, coupled with the bombing raid in Sirte, indicates however that the UN-backed authorities are looking to thwart efforts to see a return of Gaddafi’s supporters at the helm.

There is little apparent point to the bombing raid, insists Libyan academic Mabruk Derbesh. “These bombs are redundant as ISIS has almost been defeated in that area,” he added.

Other sources in Libya insist this raid is designed to add to the ambient chaos and plunge the country further into internecine conflict.  “Isn’t it strange that every time we appear to see a glimmer of light at the end of the tunnel, Western countries come and bomb us back into it?”

The sentiment for many Libyans is that a Western military presence can only exacerbate existing tensions.  As the situation worsened, many Libyans realized the only way out would be to concentrate efforts in a common policy to root out terrorist forces coming from the outside and rallying behind one consensual leadership. The first proved popular; the second however more problematic, yet with the emergence of the Greens once again as a formidable force, many previously hostile to the old order, have been coming round, seeing it as the only credible alternative.

These attacks on Sirte will only slow down the process and derail an already fragile road map to national unity. But who benefits from a rudderless Libya?


The UN-approved leadership supports these blind raids that will no doubt kill and maim many on the ground leading to an inevitable inflation in IS ranks as a result.

The social collapse has already transformed the country into a safe haven for both IS terrorists and human traffickers who’ve doubled their efforts in the summer months to push for more sub Saharan migration into Europe.

A bombing raid on coastal towns can only push more to flee the already war-torn and unstable country.

In this ongoing turmoil, French and American armies can continue to operate concerned little by what the central government will do or say.

Only a strong authority can oppose what are clear violations of Libyan sovereignty, however with a collaborationist government with no credibility at the helm and an almost total absence of order on the ground, foreign armies can continue to operate as they see fit.

It’s worth noting that the first decisions once on Libyan soil for US and British forces was to secure the oil refineries.  That the rest of the country was being ripped apart as warring militias continued to fight over the spoils was secondary; the priority was to safeguard ongoing oil output.

For Libyans there is therefore little advantage to these air raids. The current leadership clearly has no power to oppose them and has therefore agreed to go along with what appears to be an operation to re-enforce a Western presence in Libya, a country sandwiched between the Arab world’s most populous nation Egypt and Africa’s largest country and one of its most oil and gas wealthy: Algeria.

All in all, these operations offer advantages to Western powers while giving nothing in return to Libya which will bear the brunt of its consequences.

According to academic Derbesh, President Obama is fulfilling his Democratic Party’s obligation to strengthen Hillary Clinton’s campaign. “After all, Clinton was the one who convinced Obama to go along and champion the war on Libya through visits to France and England. Libya’s case will come up during the election, so this is one way to combat any negative campaigning using Libya, which appears to be Clinton’s weakest link as secretary of state, considering Syria’s war has the support of both parties, and so can’t be used against her by her Republican opponent.”

Whichever way this latest military operation into an Arab country is viewed, it’s likely to lead to a rising death toll conveniently dismissed as IS terrorists while no doubt aiding American politicians in their race to the White House.

As is customary that race will be paved with the corpses of Arabs and Africans. A few more dead in ravaged Libya will hardly make a difference to Western audiences.

As for Libyans, the price tag of their alliance with NATO continues to rise, though the currency in use continues to lose value.

Hafsa Kara-Mustapha is a journalist, political analyst and commentator with a special focus on the Middle East and Africa. She has worked for the FT group and Reuters and her work has been published in the Middle East magazine, Jane’s Foreign report, El Watan and a host of international publications. A regular pundit on TV and radio, Hafsa can regularly be seen on RT and Press TV.