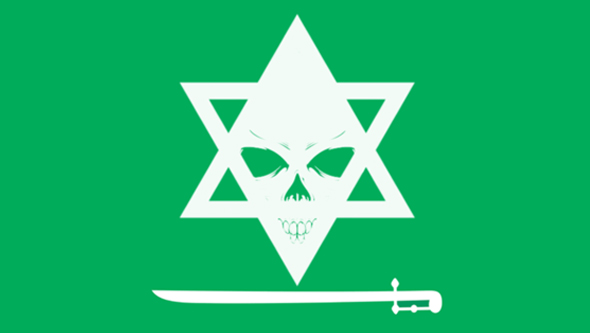 Since I just debated the out-of-the-closet Saudi Israeli alliance (watch The Debate above) I thought this would be an appropriate moment to bring back one of my most popular Press TV op-eds from a few years ago.  -KB

Will Israel Merge With Saudi Arabia?

On February 1st, 1958, Egypt and Syria merged to become one country: The United Arab Republic. Though the brief political marriage ended in divorce on September 28th, 1961, it set a precedent for potential future Middle Eastern liaisons.

It seems that the Saudi and Israeli regimes have joined together to pursue the same foreign policy. Since their domestic policies are also similar, the question arises: Why not merge the two countries into a new entity called Saudi Israelia?

Skeptics will argue that such a marriage between Zionists and Arabs could never succeed. But consider how much the two nations have in common.

Both regimes were founded, and are still largely controlled, by enormously wealthy parasites. The Rothschild international banking family created and still dominates Israel, using the unearned wealth it has sucked from the world’s economy through usury. The Ibn Saud family created and still runs Saudi Arabia, using unearned oil wealth and mafia tactics to finance its operations.

The parasite state of Israel depends for its existence on bleeding the US taxpayer for billions of dollars every year. According to the Christian Science Monitor, the real cost of Israel to the American taxpayer is more than a trillion dollars.

If we also consider the cost of the 9/11 wars-for-Israel, Israel’s real cost to the US is five trillion dollars, perhaps more. No wonder America is broke.

The Ibn Saud family is equally parasitical. It consists of a few honest and pious individuals scattered among a large number of billionaire playboys who have never done an honest day’s work in their lives. The Ibn Sauds not only bleed the world’s economy by siphoning off oil revenues to finance their depraved amusements, but they also muscle in on business enterprises in Saudi Arabia, forcing entrepreneurs to bring Royal Family members on board as co-owners who invest nothing and do no work, but grab the lion’s share of the profits.

If these two parasites merged, imagine the mega-parasite they could become!

The Israeli and Saudi governments share another trait: arrogance. The Israelis are convinced that they are the “chosen people,” God’s gift to the world, who have the right to lord it over lesser beings, especially the Palestinians they are expelling, tormenting, and killing. They think God gave them the title to Palestine in a real estate deal thousands of years ago, so now they can do anything they want – including invading, occupying and oppressing the people around them.

The Saudi rulers are almost as arrogant. They think God gave them all that oil so they could fly around the world in Lear Jets behaving like the most degenerate sybarites on earth, while at the same time demanding respect as the custodians of Islam’s holy places. And just as the Israelis imagine that their chosen-ness gives them the right to oppress others of different faiths, the Saudi regime supports a Takfiri misinterpretation of Islam that claims the right to oppress or even kill those whose beliefs differ from their own – including their fellow Muslims.

The Saudis, like the Israelis, claim the right to invade and occupy other countries. Just as the Israelis have invaded Egypt, Syria, Lebanon, and of course Palestine, the Saudis have now invaded and occupied Bahrain. The Saudis seem to be taking Israel’s behavior as a model.

Another affinity between the Israelis and Saudis is their shared love of bulldozing and destroying Islamic monuments and holy places. The Israelis, as everyone knows, are gradually destroying the al-Aqsa mosque, the third holiest site and greatest architectural monument in Islam, by undermining its foundations in supposed archeological digs. Their aim is to one day destroy the al-Aqsa mosque and in its place erect a satanic edifice misnamed “Solomon’s temple,” setting off a full-scale civilizational war against Islam and Muslims.

The Saudis, too, love destroying Islam’s architectural heritage. They have bulldozed a long list of Islamic religious and historical sites, and turned Mecca and Medina into hideous simulacra of Houston, Texas. Some observers wonder if the Saudis will eventually turn the hajj pilgrimage into a theme park modeled after Walt Disney World, in the same way the Israelis have considered building a Christian Disneyland called “Galilee World Heritage Park.”

The Israelis, like the Saudis, are making money from religious pilgrims while mistreating their country’s religious heritage. Like the Saudis, they are scandalously irresponsible custodians of holy sites.

If the Israelis and Saudis merged into one country, just think how much fun they could have together bulldozing Christian and Islamic history, religion and culture!

Indeed, since both Israel and Saudi Arabia share a dubious “religious” basis of legitimacy, it would make sense for the new state of Saudi Israelia to merge the two religious currents into a new state religion called Zio-Wahhabism. The Zio-Wahhabis could declare themselves the chosen people and make everyone else a second-class citizen. They could behead people who follow other schools of thought. They could bulldoze the entire heritage of Islam and Christianity.

The Saudis and Israelis also share a love of dastardly plots, including false-flag operations. Mideast expert and journalist Zafar Bangash recently stated on my radio show that the war on Syria was plotted by two American agents of Israel, Dan Shapiro and Jeffrey Feltman, at a meeting in Paris with Saudi intelligence chief Bandar Bin Sultan. Bangash agreed with me that Prince Bandar, who also goes by the name “Bandar Bush” due to his ties with America’s leading crime family, seems to have been behind the false-flag chemical weapons attack on al-Ghouta… and that Bandar and the Israelis, along with their Bush crime family friends, were the probable perpetrators of the crimes of September 11th, 2001.

Since both the Israeli and Saudi regimes have everything in common – including a shared contempt for the Americans who prop them up – it seems logical that they should merge into a single country: The Zio-Wahhabi Empire of Saudi Israelia.