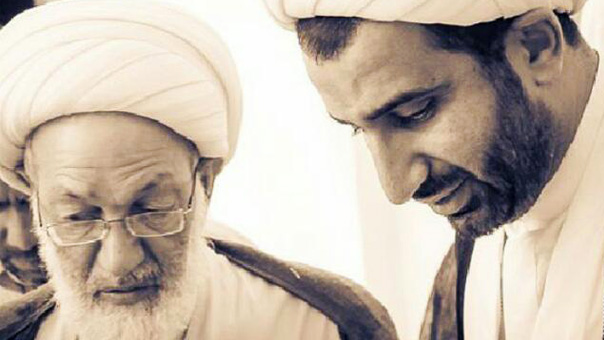 Member of the Council of Islamic scholars in Bahrain: Protesters at the edge of the house of Sheikh “IssaKassim” ready for martyrdom.

The Member of the Muslim Scholars Council in Bahrain affirmed that all the protesters who are in front of the house of Ayatollah Sheikh IssaQassem, they are quite willing to testify, and face painting system with their chests.

According to Sheikh Mohammed Hassan Khajest member of the Muslim Scholars Council in Bahrain,cleared possible scenarios and assessments for handling Al Khalifa against the people of Bahrain and Ayatollah, “Sheikh IssaQassem,” which is a great leader of the Shiites in the country.

And built-Sheikh Khajest by presence of Bahraini citizens who are day and night around the house, “Sheikh IssaQassem,” by saying the person who comes daily to the Diraz area, he knows that it is a target, and there is a high probability of death, but all of them are willing to testify.

He added that the situation in the region today, being in the hands of specialists in Duraz management, and they are united and their goal is one.

He has also affirmed that the aggression against Sheikh ‘IssaQassem, “united together opposition groups in each country, which did not happen during the five-year struggle of the people of Bahrain., Gathered all around Sheikh’ IssaQasim” and even opposition currents to him, said on Sheikh Qassem: “it is their own red line.”

Sheikh Khajest then said that if Al Khalifa regime willing to arrest Sheikh Qassem, will be offered all the options available for the nation and the Bahraini people are ready to face forces bullets by its bare issuance.