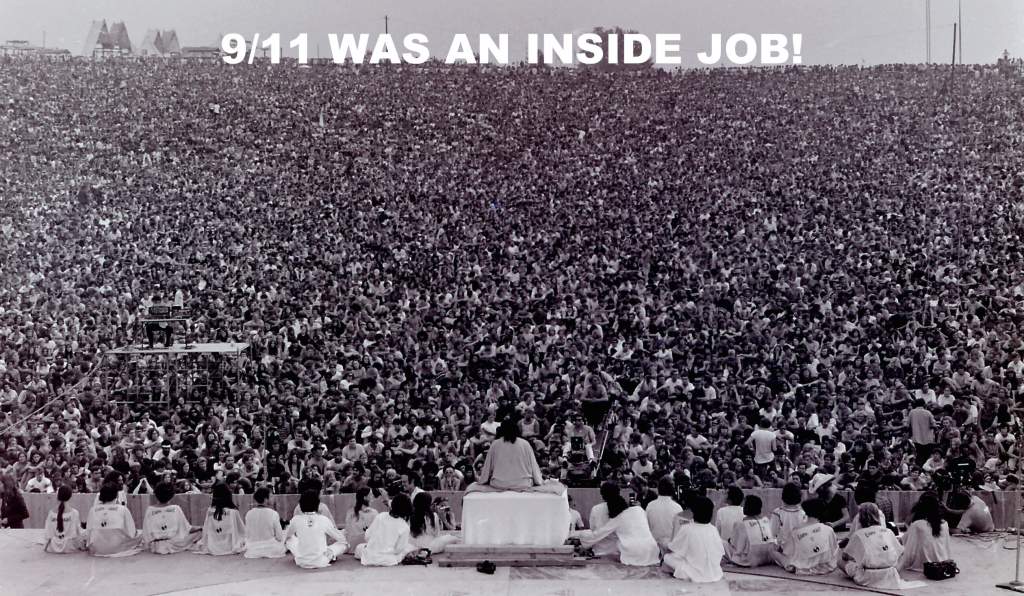 Today is the 47th anniversary of the Woodstock Music Festival, a major milestone in pop culture history: the moment when long-haired hippie peaceniks realized they were the new majority, simply because almost half a million of them showed up in the same place at the same time.

Before Woodstock, the expanding swarm of hippie types was viewed as a fringe minority. Post-Woodstock, pretty much everybody let their hair grow long…even dopey straight people. Just look at 70s sitcoms if you don’t believe me. Sex, drugs and rock and roll became the new orthodoxy, and public sentiment against the Vietnam War passed the tipping point and made that war unwinnable.

The Woodstock experience – soon to be hyperbolized with all the hippie hoopla marketing men can muster, as the 50th anniversary approaches and money-making opportunities arise – suggests that the way to take your countercultural movement over the top, and form a new majority, is to come together in a gigantic crowd.

Could “conspiracy theorists” learn from this? Would a gigantic 9/11 Truth Festival attended by half a million people transform public perceptions of the truth movement and establish it as the new majority?

There are more than enough of us out there to fill dozens of Woodstocks. My own Veterans Today articles on the biggest recent false flags – Charlie Hebdo, Paris 11/13/15, San Bernardino, Brussels, Orlando, and Nice – taken together, have garnered well over a million reads. That shouldn’t surprise anyone, since as far back as a decade ago, scientific polling indicated that about 100 million Americans knew or suspected that 9/11 was a false flag inside job, while only 16% of the American public fully accepted the official story.

So the number of potential visitors to TruthStock is 100 million plus. If we can even draw half of one percent of the total number, that’s our half million people…which would make us bigger than Woodstock.

Any takers out there?

But there is a downside. Gathering all the truthers together in one place might not be such a good idea. It would be too easy for the National Security State to surround the whole encampment with barbed wire, and voila  – instant FEMA camp! It would save them the expense of rounding us all up.

Cass Sunstein could write a grant proposal and convince DHS to actually finance TruthStock: “For a fraction of the price of mass roundups and cattle cars outfitted with chains, FEMA can ‘nudge’ conspiracy theorists to self-incarcerate…”

TruthStock, like Woodstock, might turn out to be a less than 100% pleasant experience. As the rain pours down, and half a million truthers gradually sink ever-deeper into a sea of mud, a stoned-out-of-his-mind voice on the intercom might intone:

“To get back to the warning that I received. You may take it with however many grains of salt that you wish. That the red pills that are circulating around us aren’t too good. It is suggested that you stay away from that. Of course it’s your own trip. So be my guest, but please be advised that there is a warning on that one, ok?”

And suddenly panicked voices are asking: If the barbed wire surrounding TruthStock is there to keep OUT people who haven’t bought tickets…then why is the barbed wire facing inwards?!

But seriously folks…that’s just paranoia. TruthStock – assuming the FEMA Camp nightmare turned out to be just a brown acid hallucination – might have even more benefits for the truth movement than Woodstock had for the hippie movement.

The hippies spent much of their lives among other hippies. The reality of the mass hippie movement was already palpable.

Truthers, by contrast, generally “hang out” with other truthers on the internet. Sometimes it’s hard to believe all those other truthers actually exist. The mainstream media, dedicated as it is to pretending that we and the issues we raise don’t exist, reinforces our existential doubt and anguish.

The best way to establish our own reality is to gather in the real world.

When I give talks in places like Ann Arbor or Adel, Iowa or Duluth, the fifteen or twenty or (if we’re really lucky) thirty people who show up offer each other evidence that we are real and we’re not going away. Image what would happen if half a million of us showed up somewhere!

So we need to find some big-name bands willing to commit to showing up at TruthStock. Then we need to find the truther equivalent of Max Yasgur, the Woodstock, NY farmer who let all those hippies congregate on his property.

Then we’ll have to find a way to make money off it so we can pay the bands.

Which means we’ll have to sell tickets.

So we’ll have to surround the place with barbed wire to make sure people buy the tickets.

But we’d better make sure the barbed wire faces outward.