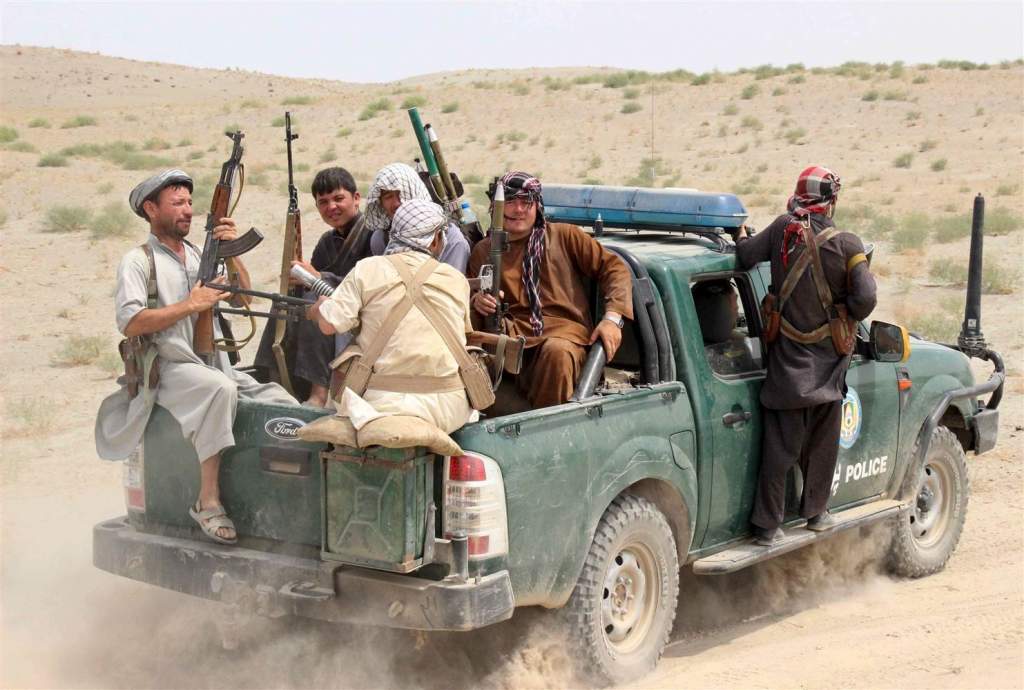 By Masud Wadan for VT

Since Hamid Karzai swept to power in 2001, all the governments under any leader have been throwing dust in the eyes of nation by shunning any responsibility of being behind the existing multidimensional Afghan crisis and widely counting on policy of publicly accusing Pakistan of pushing militants into Afghanistan.

Apart from the ground realities that implicate Pakistan as a major instigator of the regional conflict, Afghan government is, too, not pure of guilt in the current vandalism of its territory.

It has turned as a normal posture of Afghan officials to pin any single incident on Pakistan, although it is undeniably true, and it is a mission that complements with the open-armed support from itself crooked Afghan high-ranks.

Afghanistan is now doomed to a stalemate and this can be broken if a Turkey-like purging of the contaminated authorities take place. This renewal of structure must set off from the leaders and go down to the wicked police officers in the ranks of Afghan military who works for insurgents –  which is an abounding case here.

What fall in question is that who is there to spearhead such a campaign? It might have been known to many now that Afghanistan’s government plays into the hands of the West. And it is also almost certain that West upholds it, then demanding the world’s superpower to make good change in Afghanistan is scornful.

As far as the likely collision of Russia and the United States is concerned in the region, any movement whether homegrown freedom fighters or externally mobilized one seeking to subvert the United States–led government in Afghanistan that is of vital importance for protection of Western interests here, will face hard kicks by the present long-trained Afghan hierarchy within president Ghani’s government, as the pillar of the state stands on the strength of these corrupt functionaries.

In a sentence, now Afghanistan’s war is at a stage where strategies and war policies are penned based on the degree of tensions in the relations between United States and Russia that mostly tends to escalate.

Many reports have uncovered the outright association of military or non-military ranks of Afghan government in highly fatal bombings in Afghanistan. In many cases, the names of embroiled persons have barely escaped revelation though some have been disclosed in one way or another.

The most the government has done towards these criminals was uttering that “we’ll investigate it”, which has later been just thrown to the winds.

Afghan leaders are pipsqueak to count on. It is so meaningless to stage a protest in the face of govt. that has no eyes to see or ears to listen. Last month, a packed rally of ethnic Hazara minority on one of Kabul avenues linking key Afghan and foreign organizations was culminated in a suicide attack that left record-high death toll.

Immediately after the disaster, a vaguely operating terrorist group the “Islamic State” claimed responsibility for the attack.

We stubbornly keep faith with media that keep telling about terrorist groups’ absurd activity and start to assume that attack was conducted by the reported group. Have we ever reflected on capability of a group to break through great secure lengths into target point? What is there to guarantee the truthfulness of media?

Yes, we don’t know of the objectivity of many, many news feed we receives particularly about security and terrorism in the world. The Media manipulates for the audience an imaginary world about thorough process of an activity that doesn’t exist in real.

In the aftermath of the Kabul attack, scores of media stories accused Afghan govt. of being behind it either by pushing a suicide bomber through the crowd to terminate the protest that, in some analysts words, was arranged by Iran’s hired Afghan politicians in the country, or leaving the area exposed to suicide bomber.

Two weeks ago, advisor to Afghan National Security Council Hanif Atmar who is infamous countrywide for his high hand in beefing up of the Islamic State in Afghanistan, along with minister of defense and NATO Resolute Mission’s commander Gen. John W. Nicholson visited Afghan northern province of Kunduz. In the context of the last year’s terrible Kunduz attack and attempts to deter Russia, the trio’s tour of this province absolutely pose questions.

A dig-deep into this visit that was aimed to not go public, may slightly resolve the mystery of how the Taliban militants outguns Afghan security forces or reach out to caches of ammunitions meant for Afghan military.

In June, Khalil Andarabi the former police chief of Wardak province, 35 km west of Kabul city, was detained by NDS while carrying one of the Taliban’s most wanted commander to Kabul in his exclusive vehicle, believing that the militant wouldn’t be spotted under his shadow.

The police chief was the member of a notorious party “Shura-e Nazaar” whose members and power in the government are beyond measure.

The party receives millions of dollars each year in secret agreements with Afghanistan’s immediate and distant neighbors.

In the days after taking the involved police chief in custody, he just got released from confinement and soon later a widely circulated facebook image of him revealed that he was outside the country.

Such astonishingly high degree of impunity doesn’t reflect the failure or incapability of Afghan leaders, it is rather a systemic behavior of the Afghan regime that chooses to execute or pardon traitors based on their interests.

The unofficial observers in northern Afghan provinces and the capital Kabul whisperingly circulate a horrific reality that the “Afghan military leaders supply militants with military hardware and weapons”.

The security advisor Hanif Atmar claims the war in northern Afghanistan is directly fueled by Pakistan’s intelligence agency, ISI. Pakistan has greatly bumpy and impassable route to reach where Afghan leaders claim, while other common transit avenues are not for their use.

Yet, the distance between Afghan and NATO forces’ bases and the mythical Pakistani fronts is not over 100 meters. In authorities’ words, it means Pakistan has defeated Afghan and NATO frontlines behind their bases.

This is a fabrication of stories that is beyond one’s belief.

Let’s move a step further ahead and clarify the obscurities that the avowed axis of Russia-Iran and United States-Pakistan are gearing up for staging another eventfully dangerous war, perhaps, in Kunduz.

In other words, the United States’ backing of eastern European nations against Russia is an echo to the Kunduz conflict or what special goes on northern parts of Afghanistan. That is, it struggles to bully Russia from Afghanistan and Eastern Europe which are at its helm.

Admittedly, the United States is highly provocative to Russia and instantly jumps on any issue emerging about it in the region. Take the assassination of ex-Taliban leader Mullah Mansoor in Pakistan as a unique example, he had reportedly met with Russian officials in Iran that destined him to die on the return to Pakistan, else a compromise of any level with even Iran was not making the U.S. so reactive.

Adding to the litany of misconducts of Afghan government was the plot of bombing on heavily-laden military buses of police cadets traveling from Wardak province to Kabul that killed nearly hundred young police cadets and injured dozens.

The incident is worth mentioning here and is picked up for bearing the sign of conspicuous treachery of the Afghan military leadership towards its young joiners who were in early stages of a dangerous line of duty.

Reports say that a security source, on the condition of anonymity, had told a national newspaper that the Center for Coordination of Security Forces was thrice given tips of highly likely attack. A Taliban member who was detained three weeks before the attack had also confessed about probability of such attack.

It has to be asserted that rare incidents of this nature are sheer planning of militants and without internally offered support no insider or outsider can dare as much to draw up complicated missions.

Whether in Afghanistan or Middle East or elsewhere, terrorism is set to continue as an Iraqi commander of Fallujah liberation operation had warned that a new version of Islamic State is around the corner – maybe under a new battle cry or ideology.

The southern Helmand province of Afghanistan has been spotlight for its more violent turn as the regional governments attempt to shift the Taliban’s Quetta Shura to Helmand. The province singularly produces more than 50 per cent opium of the world.

The province along with other areas has been ones that Afghan and foreign war theorists plan to hand over to the militants as part of the next chapter of war and terrorism that is not far off. Taliban are encroaching into Helmand’s many districts and cutting off major roads.

The relocation of Quetta Shura into this Afghan province would disburden Pakistan of a struggling responsibility as well as disgrace of hosting a terrorist organization.

In the meantime, the provincial council member of southern Paktia province says that some unidentified helicopters drop ammunitions in the Taliban-held districts. In Afghanistan, other than international forces and the Afghan govt., no party possesses a single aircraft to get into the realm of the Taliban and supply arms.

These districts represent tens of other ones that are part of agenda to replace into the hotspot of militants that slide across the border into Afghanistan and needs a sanctuary as a command center.

Now, no argument is there to deny the role of Kabul in what is offering of own soil to the colonialists.

It is a matter of concern because governments of Afghanistan and Pakistan are taking risk of propagating against each other that bears nothing but leaving xenophobia and hateful image of each other, though governments would possibly shake hands behind the closed doors.

By holding Pakistan responsible for the mess in Afghanistan, Afghan leaders cover up not just own partnership but also use the blame-game as shield to rising criticism against international forces stationed in Afghanistan.

Under current circumstances, Kabul has no right to denounce others unless an all-out regime change come into force and a democratically – not of Western style – elected president run the leadership.