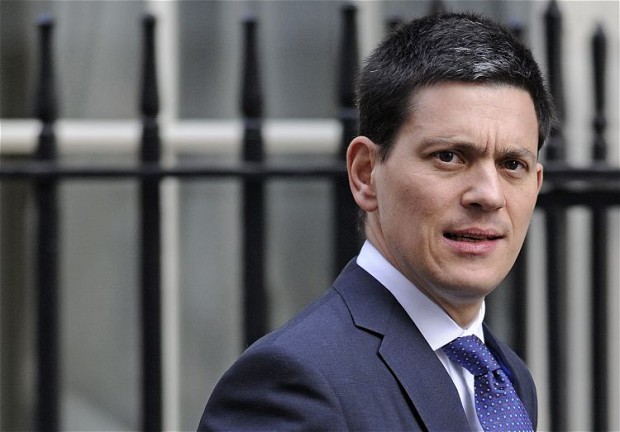 Unbelievably, Labour Party chiefs are trying to persuade David Miliband to come back from New York, parachute into a safe seat and snatch the Labour Party leadership from Jeremy Corbyn, according to newspaper reports.

Presumably these are the same chiefs who continue to crucify Corbyn for his links to so-called “terrorist” groups Hamas and Hezbollah. The plotters, it seems, are much more tolerant of friends and admirers of the Israeli terror regime.

Ralph Miliband arrived in the UK fleeing Nazi persecution. The cocky Miliband brood were soon telling the British nation what to do and how to do it. Ralph’s sons, David and Ed, lost no time taking a hand in misgoverning our country.  Both sat in the Cabinet simultaneously.

Ed was Minister for the Cabinet Office,  Secretary of State for Energy and Climate Change, and lately Labour’s failed leader. David  was Environment Secretary and Foreign Secretary. Under his watch two US rendition flights put down at Diego Garcia, which he initially denied.

Peter Oborne, writing in The Telegraph at the time of David Miliband’s exit from UK politics, said of him:  “After Labour’s 1997 election victory he was the poster boy of a new ruling elite which seized control of the commanding heights of British politics. Anti-democratic, financially greedy and morally corrupt, this new political class has done the most enormous damage. Since David Miliband was its standard-bearer, his political career explains a great deal about what has gone wrong with British public life, about why politicians are no longer liked or trusted, and about how political parties have come to be viewed with contempt.”

Oborne made the point that Miliband set the pattern so many others, including his brother Ed, followed. “Obsessed by politics at university, he has never had even the faintest connection with the real world. From life in think tanks he became a Labour Party researcher and special adviser, before being parachuted into the north-eastern constituency of South Shields as an MP.”

Miliband wrote Labour’s vacuous 1997 and 2001 election manifestos and was at the heart of the Labour machine when it generated the notorious falsehoods over Iraq. Oborne also noted the irony of Miliband’s new job in the US heading up a humanitarian organisation “when the government of which he was such a loyal member created so many of the world’s disasters”.

Being British became an embarrassment

To those who despair of the endless cruelty and slaughter in the Holy Land he will be forever remembered as the shameless British foreign secretary who apologised to Israel’s gangsters for the risk they ran of being arrested if they set foot in London. Back in 2009 the gruesome trio Ehud Barak, Tzipi Livni and retired general Doron Almog cancelled engagements in London for fear of ‘having their collar felt’. Israel complained bitterly and Miliband responded by promising the odious Lieberman that UK laws relating to ‘universal jurisdiction’ would be changed. He asked Prime Minister Gordon Brown and Justice Minister Jack Straw for urgent action.

Thankfully a general election intervened and ousted Miliband from the Foreign Office, but his grovelling promise was eagerly taken up by his replacement, William Hague, another fanatical ‘friend of Israel’.  Hague declared that a situation where foreign politicians like Mrs Livni could be threatened with arrest in the UK was “completely unacceptable… We  will put it right through legislation… and I phoned Mrs Livni amongst others to tell her about that and received a very warm welcome for our proposals.”

Private arrest warrants were necessary because the government was in the habit of shirking its duty under the Fourth 1949 Geneva Convention and dragging its feet until the birds had flown. Bringing a private prosecution for a criminal offence, said Lord Wilberforce, is “a valuable constitutional safeguard against inertia or partiality on the part of the authority”.  Lord Diplock, another respected Lord of Appeal, called it “a useful safeguard against capricious, corrupt or biased failure or refusal of those authorities to prosecute offenders against the criminal law”. And the beauty of the private warrant was that it could be issued speedily.

Miliband’s move to scupper this was even more deplorable when it is remembered that Tzipi Livni, Israel’s former foreign minister, had been largely responsible for the terror that brought death and destruction to Gaza’s civilians during the blitzkrieg known as Operation Cast Lead. Showing no remorse, and with the blood of 1,400 dead Gazans (including 320 children and 109 women) on her hands and thousands more horribly maimed, Livni’s office issued a statement saying she was proud of it. Speaking later at a conference at Tel Aviv’s Institute for Security Studies, she said: “I would today take the same decisions.”

Any British government minister who brings this degree of obsequiousness to his job and is prepared to undermine our justice system in order to make the UK a safe haven for the likes of her, deserves banishment to outer darkness… permanently.

Miliband is also remembered for not having the guts to visit Gaza, or even Iran, while in office. Yet he managed to reach Gaza in 2011 with Save the Children. “I had not been able to visit while in government for security reasons,” he said in an article in The Guardian. What nonsense. The only danger would have been from an air-strike by his psychopathic friends in Tel Aviv. Risks go with the job. You can’t be an effective foreign secretary wrapped in cotton wool.

While David Miliband headed up foreign policy it was frankly embarrassing to be British. And Labour’s clowns want to bring him back?