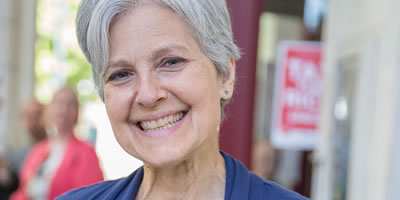 It looks like Green Party Candidate Jill Stein is starting to get some major coverage in the mainstream media. In addition to the above video, you can also go here to see her interviewed on CNN, where she calls for an investigation of Hillary Clinton. Key quote from that interview:

“I think there should have been a full investigation. I think the American people are owed an explanation for what happened and why top secret information was put at risk.”

All of that is very nice, but calling for an investigation of Clinton is an eminently safe position to take, and you will notice that in neither video does Stein address the issue of Israel or the power of its lobby in America.

“Well, she can’t talk about stuff like that and hope to continue getting mainstream media coverage like she’s now getting!” I imagine some of her supporters are probably thinking.

Just for the record, I do believe Stein would be preferable to either Clinton or Trump, but in the long run I don’t think much would change in America were she to somehow pull off the near-impossible and get elected. I say this for a lot of reasons, but perhaps foremost because of the rather prodigious historical record over the past 25-30 years–of impressive-sounding candidates espousing support for peace or economic or social justice issues while on the campaign trail…but then pivoting to the right after getting elected.

It seems to be a truism: people go into politics with best intentions and high ideals; they leave either scandal-ridden or jaded.

We’ve seen this time and again with Democrats as well as Republicans–winning the support of voters only to succumb to the pressure of lobbyists after assuming office. Does anyone think Green Party members would somehow be immune to this pressure? For those who answer yes, you might consider the case of Elizabeth May, leader of the Green Party of Canada and a member of the Canadian Parliament.

Canada’s Green Party held its convention on August 5-7 at which time delegates endorsed the Boycott Divestment Sanctions movement, adopting BDS into the party’s official platform. Though supported by a majority of delegates, a good many Green Party members, a number of whom actually hold elected office, opposed the measure, including May, who pronounced herself “pretty devastated” in the wake of its passage.

In an interview Tuesday, she [May] said she was stunned by the vote and described what happened at the convention as “an aberration” caused by abandonment of the usual consensus decision-making process. The hastily adopted policy could draw accusations of anti-Semitism, she said, and she hopes to have Green Party members reconsider.

Convention delegates voted to endorse the Boycott, Divestment and Sanctions movement, also known as BDS. Supporters of BDS are calling for boycotts and sanctions over the way Israel has dealt with Palestinians.

May said that while she voted against the resolution, she doesn’t want to “demonize” groups that support BDS. “I think it’s a terrible idea and I don’t think it’s going to advance the cause of Palestinians,” she said. “One of my options is to step down as leader because that would be a way of triggering a convention.”

In other words, May is considering stepping down as party leader (but presumably not resigning her parliament seat) in order to “trigger” a new convention and thereby a new vote on the matter. That should please the Zionist lobbyists, who apparently were out in full force at the convention.

One leader of a Canadian Jewish organization referred to the Green BDS measure as “utterly at odds with Canadian values,” saying that it “seeks to censor and blacklist Israelis,” while another Jewish leader put it perhaps even more forcefully.

“We are appalled that the Green Party has endorsed BDS against the only liberal democracy in the Middle East and a country that is a world leader in environmental technology and solutions,” said the head of the Canadian branch of the Jewish National Fund, an organization whose role in the Jewish appropriation of Palestinian lands is well known and was also discussed at the convention.

Israel has of course been stealing Palestinian land for more years than most of us have been alive, but the land grabs have been especially in high gear in 2016, so I can’t help wondering–if Elizabeth May doesn’t think BDS will “advance the cause of Palestinians,” as she puts it, what exactly does she think will work? Being nicey-nice and saying “pretty please”–is that a better strategy from her perspective?

May, of course, isn’t the only party member who holds views of this sort. Andrew Weaver, Green Party member of the British Columbia Legislative Assembly, says support for BDS “represents a significant step away” from party values.

“I think the Green Party of Canada needs to take a careful look at their policy process and ask themselves how a policy that goes against Green Party values could have been allowed on the floor of a convention,” Weaver said.

“BDS is a politically motivated movement that damages any attempt at peace in the Middle East by assigning blame to one party. It risks increasing tension and does not represent a responsible or thoughtful approach to a difficult international issue,” he added.

Well, maybe these are just the peculiar quirks of the Green Party of Canada. Maybe the Green Party of the US is a bit different. Sure, I guess that’s possible, but you can go here to see a list of Green Party USA members who hold elected office. The state with the highest number is California, with a total of 71. Just on a whim, I did a search on Dan Hamburg, whose name appears at the top of the list, and turned up an article here. You might want to check it out. It’s a bit surprising.

Hamburg is a member of the Board of Supervisors in Northern California’s Mendocino County, and it seems he supports the trapping of wild animals. In fact, the story even contains a direct quote to that effect.

“I am an animal lover,” said Hamburg. “I still think we need a (trapping) program in Mendocino County.”

It’s a bit of a shocker to hear a member of the Green Party expressing support for the use of steel-jaw, leghold traps, but then the article talks about local ranchers, a group of people who seem to exert considerable political influence in certain rural regions of the western US and who have voiced support for Mendocino’s trapping program as a means of  “predator control.”

As the writer describes it, Hamburg believes the trapping program “is a critical tool that will help protect ranching in Mendocino County, including its organic meat industry, and support efforts to create a local wool processing mill.”

Wildlife organizations, including the Center for Biological Diversity, have denounced the program for its “needless slaughter” and filed a lawsuit to stop it. They say data shows that in the year 2014, 47,000 animals were killed in California, and nearly 3 million nationwide, through trapping programs like the one in Mendocino. They also point out that nationwide, in the same year, trappers inadvertently killed more than 50,000 animals that were not their targets, including eagles and pets. Life is cruel, and humans, at least a good many of us, are some of the most cold-blooded creatures on the planet.

So now here we have Jill Stein at long last beginning to get some major media coverage. CNN will even be hosting a “town hall” Wednesday evening, 9 p.m. Eastern Time, with her and her running mate, Ajamu Baraka. Criticism of Hillary Clinton and Donald Trump is all well and good–and you’ll probably hear a lot of that should you tune in. But will either candidate have the courage to express the hard truths about Israel that need to be expressed?

Will they, for instance, discuss the Zionist state’s repulsive practice of holding on to the bodies of Palestinians killed by Israeli security forces? Would either dare to mention the word “genocide” or “apartheid”? You can go here to see the Stein campaign’s official position on BDS and the Palestine-Israel conflict. It’s a fairly strong statement as far as it goes, and it does use the word “apartheid.”

But politics in America is very much like watching an endless replay of the Dr. Jekyll and Mr. Hyde story. In the campaign we get the nice, socially responsible Dr. Jekyll, and only later, after Congressman so-and-so moves into his new office and the lobbyists start coming around and sticking their heads through the door, does the Hyde-like monster emerge. Maybe we need predator control far less in Mendocino County than in Washington. Perhaps some steel-jaw, leghold traps around AIPAC headquarters would be useful.

In any event, if you have a gut feeling that Jill Stein will prove to be the one-in-a-hundred (or maybe even one-in-a-thousand) exception to the rule, then by all means you should vote for her. My own take is that America is probably past the point of redemption, that is to say the stage at which electing someone like Stein could have made a difference. The culture of me-my-mine, the lifestyle of wealth-gathering, and lying about any and everything to advance it, and the view of such lying as socially acceptable–all of this is probably too deeply embedded in our society at this point for an easy fix such as electing somebody from a different party.

Whatever the case, the CNN town hall with Stein and Baraka might afford us a unique glimpse into the less virulent side of the political landscape–and certainly it would be interesting to know Stein’s views on the Green Party of Canada and the positions staked out by party leaders with regard to BDS. Perhaps, within the “town hall” structure of the program, someone will have an opportunity to ask that question.