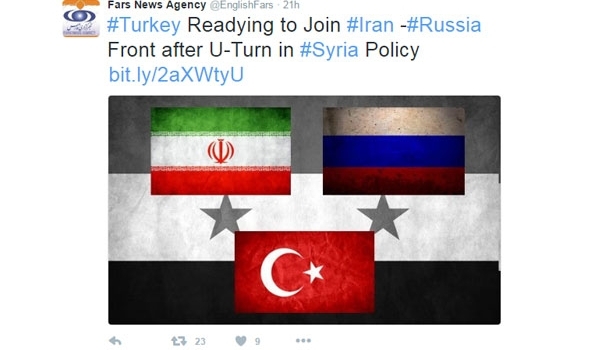 TEHRAN (FNA)- President Recep Tayyip Erdogan is preparing to take a high-profile trip to Tehran in a move seen by mainstream Arab media as the official launchpad for kickstarting the Turkey-Iran-Russia coalition on Syria.

Erdogan made a half-a-day trip to Russia after the recent coup in Turkey to meet and hold negotiations with Russian President Vladimir Putin in Saint Petersburg. Their talks were mainly focused on finding a way to end the war in Syria while both countries have set up a joint commission to implement the results of their talks.

“Given the reports claiming that Erdogan had come to Iran the night of coup and then returned to Turkey after its failure, the Turkish president’s visit to Tehran is highly important in establishing new relations between Tehran and Ankara,” Arabic language al-Hayat newspaper said in a report.

Al-Hayat quoted sources as saying that Erdogan’s visit would be paid in coming weeks, but other media sources said the trip would be taken in the next week.

Sources told al-Hayat daily that a trilateral meeting, consisting of the Iranian, Turkish and Russian officials, is due to be held to confer on ways to terminate the Syria war, adding that part of Erdogan’s trip to Tehran will be focused on this issue.

Also, the London-based al-Arab daily referred to Iranian Foreign Minister Mohammad Javad Zarif’s recent visit to Turkey, and said the trip was made within the framework of the goals pursued by Erdogan during his visit to Moscow.

According to al-Arab, the triangle of Iran-Turkey-Russia is forming an international coalition to confront the West.

The daily underlined that Zarif’s trip showed that rapid and important developments are being formed in the region which will marginalize the Arab states.

Al-Arab quoted analysts as saying that the Arabs’ foreign policy, specially on Syria, has failed deeply.

After the Turkish prime minister said it’s time for his country to improve ties with Damascus, top diplomats in Tehran said that Ankara is likely to initiate a major shift in policy on Syria and move to ally with Iran and Russia.

Turkish Prime Minister Binali Yildirim suggested a three-pronged road map for a solution to the five-year-old war in Syria, which has not only affected neighboring countries but also many parts of the world with the flight of more than 4 million refugees.

Stating that he was optimistic that a solution was at hand due to the changing nature of Turkish foreign policy, in which Ankara aims to make more friends and decrease its number of enemies, Yildirim said the time had come for Turkey to mend relations with Syria.

He added that Turkey would overcome the Syrian problem together with the regional actors.

After his remarks, Iranian Deputy Foreign Minister for Arab and African Affairs Hossein Jaberi Ansari said that Turkey will be invited to join Iran and Russia’s efforts to bring stability to Syria.

Addressing reporters in a press conference with his Russian counterpart Mikhail Bogdanov, Jaberi Ansari said that Turkey was an important country and influential in the Syrian crisis.

“The Iranian and Turkish officials agreed to continue talks in implementation of bilateral agreements in detail; we will soon send an invitation to Turkish Deputy Foreign Minister Umit Yalcın and alternatively, I will pay a visit to Ankara to talk about the regional issues in detail,” he added.

Jaberi Ansari expressed the hope that new developments in the region would help the establishment of new grounds for Iran, Russia and Turkey to act in coordination to end the stalemate and humanitarian crisis in Syria, specially in Aleppo.

In remarks made upon his arrival in Ankara, Zarif said, “Iran, Russia, and Turkey are considered important players in the region, and they need to engage in dialogue and cooperation.”

Pointing to the failed coup bid in Turkey, Zarif said, “We believe that the era of bullying and coups is over and such things no longer have a place in our region. People’s choice and will cannot be suppressed by a military group.”

During his one-day visit to Ankara, Zarif also met with President Erdogan.

Also, Zarif and his Russian counterpart Sergei Lavrov in a telephone conversation on Thursday discussed bilateral ties and the latest developments in Syria.

In the phone talks, the Iranian and Russian foreign ministers exchanged views on the latest developments in the region, specially Syria.

The two sides called for resolving the regional crises through political means.