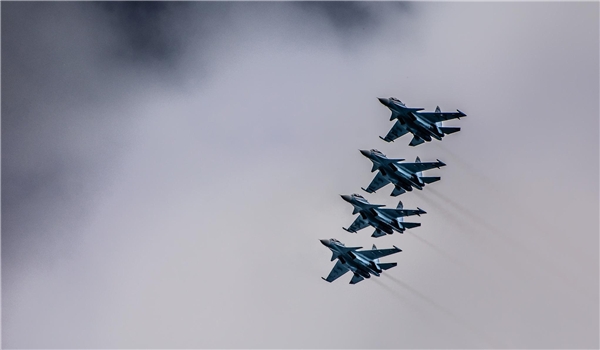 TEHRAN (FNA)- The Syrian and Russian fighter jets conducted 200 airstrikes against the military positions and gathering centers of the terrorist groups in the Southwestern part of Aleppo over past 24 hours.

Also on Wednesday, Syria’s warplanes precisely targeted a convoy of military vehicles in the Western countryside of the city of Aleppo in Northern Syria, killing dozen terrorists.

Earlier on Wednesday, the Syrian warplanes hit the military positions of the terrorists in the surrounding areas of the military academy buildings in the Southwestern countryside of Aleppo, destroying their military hardware, weapons and ammunition.

In a relevant development, the Russian fighter jets hit a military convoy of the terrorist groups in the countryside of the city of Aleppo on Wednesday, inflicting heavy losses and casualties on the terrorists.

At least 20 terrorists were killed and several of their military vehicles were also destroyed in Russian fighter jets’ strikes on al-Ramousiyeh road.

Also the Syrian air force destroyed terrorists’ positions, military vehicle convoys, including armored machinegun-equipped vehicles as well as cars loaded with ammunition, killing scores of terrorists to the East of Khanaser, Khan Touman, Kafar Hamra, Mitrem, West of al-Mansoura, at the surrounding areas of the military academy buildings and Talat Bazo in Aleppo city and its countryside.

Meantime, a media source close to the Syrian dissidents disclosed that the warplanes have destroyed the terrorists’ tunnel in the town of Khan Touman to the South of Aleppo city.

Other sources said that the 50-meter-long tunnel was destroyed in a bombing campaign by a Russian strategic bomber that had taken off from an airbase in western Iran, adding that the terrorist groups used the tunnel to transfer their terrorists to the Western parts of the Khan Touman town.

“The bombing raid destroyed the tunnel despite the fact that it had been built by strong construction materials,” they added.

The sources close to the Syrian dissidents underlined that the destruction of the tunnel has blocked the Jeish al Fatah terrorists from making advances.

Meantime, a source close to the Free Syrian Army (FSA) also confirmed that the Russian Tu-23M3 long-range bombers that had taken off from a military base in Hamadan airbase have destroyed the strategic tunnel.

Russia’s Ministry of Defense confirmed on Tuesday that it had deployed Tu-22M3 bombers and Su-34 strike fighters in Iran and these have already carried out airstrikes against terrorists in Syria.

“On August 16, 2016, Tu-23M3 long-range bombers and Su-34 bombers, having taken off from their base in Hamadan [Islamic Republic of Iran], carried out group airstrikes against targets belonging to Islamic State of Iraq and the Levant (ISIL) and Jabhat al-Nusra (Fatah al-Sham) terrorist groups in the provinces of Aleppo, Deir Ezzur and Idlib,” the ministry said in a statement.

Strategic long-range Tu-22M3 bombers have already delivered airstrikes in Syria against ISIL from the airfield.

Some 150 ISIL terrorists, including foreign fighters, have been killed as a result of Russia’s strikes on Wednesday, the ministry said.

“On August 17, 2016, Russian Su-34 bombers carried out strikes from the Hamadan airfield against targets of the ISIL terrorist group in the province of Deir Ezzur. Aircraft carried high-explosive bombs OFAB-500.”

All aircraft of the Russian Aerospace Forces returned to their home bases after carrying out airstrikes on ISIL targets in Deir Ezzur, the ministry said.

“The Su-35S aircraft based at the Hmeymim airbase in Syria provided fighter-bomber air cover for the bombers. After successfully conducting combat missions, all Russian aircraft returned to their home bases.”

The Russian Defense Ministry confirmed on Tuesday that it had deployed Tu-22M3 bombers and Su-34 strike fighters in Iran and these aircraft have already been used to carried out airstrikes against ISIL in Syria.

The Su-34 fighter-bomber has been tested in the war against ISIL in Syria where the aircraft arrived among the first Russian forces in 2015.

“Cooperation between Tehran and Moscow to fight against terrorism in Syria is strategic and we exchange our capacities and possibilities in this regard,” Shamkhani said on Tuesday when asked by Iran’s state-run news agency about Russian media reports on the deployment of the country’s fighter jets on the Iranian soil.

“The conditions have grown difficult for the terrorists due to the constructive and extensive cooperation among Iran, Russia, Syria and the resistance front and this trend will continue with new and massive operations until their full annihilation,” he added.

Shamkhani underlined that Tehran, without any expectations, is playing a military advisory role in countries which are fighting against terrorism.

Earlier on Tuesday, the Russian Defense Ministry announced that the ISIL terrorist group’s Aleppo arms depots used to supply ISIL militants near Aleppo were destroyed by Russian planes taking off from an Iranian airbase.

The report was published by Sputnik news agency after al-Masdar News reported Moscow and Tehran signed a military agreement allowing Russian aircraft to station at Hamadan Airport in Western Iran.

The number of military aircraft to be deployed at Hamadan Airbase has not been disclosed yet.

The core benefit for the Russian Air Force is a drastic reduction in flying time to terrorist targets in Syria.

Russian long-range bombers have been delivering airstrikes in Syria from a base in Mozdok, Russia, and had to cover a distance of about 2,000km to get to Syrian airspace. Now that distance is reduced to some 700km, so time-sensitive airstrikes can be delivered immediately and more cheaply.

As for Khmeimim Airbase in Syria’s Lattakia province, used by Russian task force since September 2015 to deliver airstrikes against ISIL, its airstrip is not suitable for the heavy Tu-22M3.

But that is subject to change, as Damascus granted Moscow permission to station a permanent military airbase at Khmeimim, and the Russian Air Force is preparing to thoroughly refurbish and modernize the airfield, so it will be able to accommodate all types of military aircraft in the near future.

Military cooperation between Iran and Russia is developing rapidly.

Earlier, Russian media reported that Moscow has once again requested Iran and Iraq to allow cruise missiles to fly through their respective airspace to deliver strikes on terrorist targets in Syria.

Simultaneously, a group of four attack guided missile craft each armed with 8 Kalibr-NK cruise missiles has been deployed in the southwestern part of the Caspian Sea, also to perform live artillery and missile strikes.

On October 7, 2015, four Russian Navy warships in the Caspian Sea fired a total of 26 missiles at positions in Syria held by ISIL, Shoigu announced. The missiles traveled some 1,500km, changing route several times, and eliminating 11 targets.

On November 20, warships of Russia’s Caspian Fleet launched 18 cruise missiles at seven targets in the Syrian provinces of Raqqa, Idlib and Aleppo. All of the targets were said to have been successfully hit.