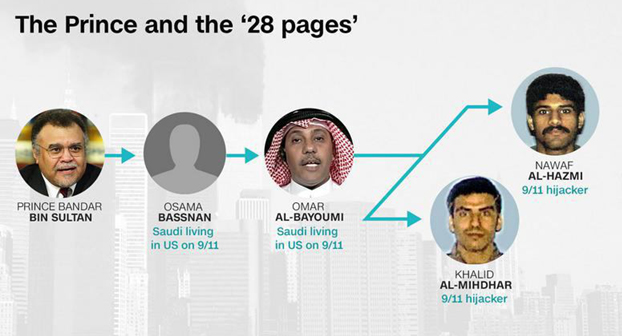 In an overnight raid, Pakistani forces captured Abu Zubaydah, allegedly a recruiter for the terror group and a member of Osama bin Laden’s inner circle.

Now, 14 years after Zubaydah was apprehended, newly declassified information from a 2002 congressional report on the 9/11 attacks, dubbed the “28 pages,” reveals an indirect link previously hidden from the American public between the alleged al Qaeda operative and a company associated with a key member of the Saudi royal family, former Saudi Ambassador to the United States Prince Bandar bin Sultan.

The revelation about Bandar’s indirect ties to the al Qaeda operative was one of the few pieces of new information contained in the declassified documents.

The CIA and FBI concluded that there was no evidence anyone from the Saudi royal family knowingly provided support for the 9/11 attacks.

But Graham said the indirect connection to the respected former Saudi ambassador was “one of the most stunning parts of the investigation” and worthy of pursuing further.