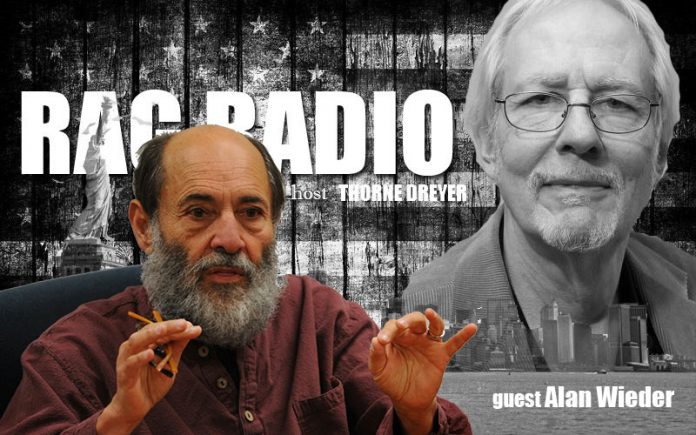 Thorne Dreyer’s guest is oral historian Alan Wieder whose new book is about the great leftist historian, author, actor, and radio and television host Studs Terkel, who was especially known for his remarkable interviewing skills.

Alan Wieder’s Studs Terkel: Politics, Culture, but Mostly Conversation is the first comprehensive book about Terkel. Drawing from over 100 interviews of people who knew and worked with Studs, Alan Wieder creates a multi-dimensional portrait of a run-of-the-mill guy from Chicago who, in public life, became an acclaimed author and raconteur, while managing, in his private life, to remain a mensch.

Against Apartheid. According to Wieder, he has been writing his current book, Studs Terkel: Politics, Culture, but Mostly Conversation, in his head since the early 1990s.

Studs Terkel was an American icon who had no use for America’s cult of celebrity. He was a leftist who valued human beings over political dogma. In scores of books and thousands of radio and television broadcasts, Studs paid attention — and respect — to “ordinary” human beings of all classes and colors, as they talked about their lives as workers, dreamers, survivors.

Rag Radio is produced in the studios of KOOP 91.7-FM, an all-volunteer, cooperatively-run community radio station in Austin, Texas, in association with The Rag Blog and the New Journalism Project, a Texas 501(c)(3) nonprofit. The host and producer of Rag Radio, Thorne Dreyer, is a prominent Austin-based activist and writer who was a pioneer of the ’60s underground press movement. The show’s engineer and co-producer is Tracey Schulz and the staff photographer is Roger Baker. The syndicated show is broadcast (and streamed) live Fridays, 2-3 p.m. (Central) on KOOP in Austin, and is later rebroadcast and streamed on WFTE-FM in Mt. Cobb and Scranton, PA., on Houston Pacifica’s KPFT HD-3 90.1-FM, and by KKRN, 88.5-FM in Round Mountain, CA — and is a featured podcast at Veterans Today. All Rag Radio podcasts can be found at the Internet Archive. Contact: [email protected].