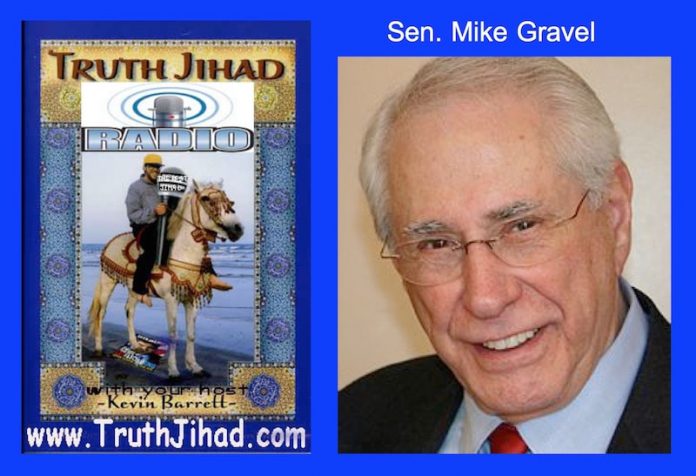 Guest: Former US Senator Mike Gravel (D-AL), who made history by reading the then-classified Pentagon Papers into the Congressional Record, and has since become a leading voice of 9/11 truth and direct democracy.

Les Jamieson of HR14.orgrecently emailed me:

“Two days ago, June 13, 2016, H.RES. 779 was submitted by Walter Jones, Steven Lynch, and Thomas Massie which cites the intention to use the Speech and Debate Clause to reveal the 28 pages.

“Nearly a year ago an effort began to inform legislators about the Speech and Debate Clause in the Constitution which could be applied to revealing the 28 pages. This clause protected former Sen. Mike Gravel when he read the Pentagon Papers into the congressional record. This effort began with a legal article by whistleblower attorney, Mick Harrison, in collaboration with Barbara Honegger. Other attorneys aided with research. Mike Gravel, himself, reviewed the article. With the help of Jeff Steinberg and other legislative activists in DC, Gravel delivered the article to Walter Jones, Rand Paul, and Ron Wyden.”

In this interview Sen. Gravel discusses the 28 pages and other 9/11 issues, opining forthrightly that “9/11 was an inside job.” Sen. Gravel also discusses the anthrax component of the 9/11-anthrax false flag event; voices his suspicions about possible post-9/11 false flag terror events; explains that the US is not a democracy; mentions Obama’s fears of going the way of JFK if he took on the military-industrial complex; and even touches on the UFO issue.

Bottom line: According to Sen. Gravel, the Bernie Sanders “revolution” will accomplish nothing unless it becomes a real revolution i.e. a popular uprising demanding direct democracy: The right of citizens to enact laws, not just elect (inevitably corrupt) representatives. For details, check out the National Initiative for Democracy.
[powerpress_playlist]
ATTENTION READERS
Due to the nature of independent content, VT cannot guarantee content validity.
We ask you to Read Our Content Policy so a clear comprehension of VT's independent non-censored media is understood and given its proper place in the world of news, opinion and media.