Home World Biden in Belgrade: A trip down NATO invasion memory lane
Share
Twitter
Pinterest
WhatsApp
Linkedin
ReddIt
Email
Print
Tumblr
Digg
Vice President Joe Biden’s visit to Serbia was intended to send a message that the US stood by its policies, essentially promoting Hillary Clinton’s campaign. All it managed to do, however, was dredge up the bitter memories of the 1999 NATO invasion.

Before jetting off to Belgrade on August 16, Biden gave a fiery speech in support of Hillary Clinton in his home town in Pennsylvania.

Within minutes of landing, Biden committed his first faux pas by failing to bow to the Serbian flag – a gesture neither China’s Xi Jinping nor Russia’s Vladimir Putin found onerous during their visits. It was all downhill from there.

Biden’s praise of Prime Minister Aleksandar Vucic for having a “positive vision for the future of Croatia” – referring to Serbia’s implacably hostile neighbor to the West, a recent addition to the EU and NATO, and a US protégé in the Balkans Wars of the 1990s – was nervously laughed off as a slip-up. It might not have been; since he came to power in 2012, Vucic has de facto governed Serbia in the best interests of Croatia, or its overseas sponsor, to be exact. 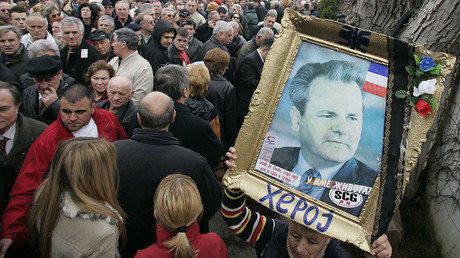 Milosevic exonerated, as the NATO war machine moves on

Then, Vucic declared Biden “a friend of Serbia and my personal friend.”That comment beggars belief, given Biden’s public record as a vocal advocate of US military intervention against the Serbs in the 1990s, or his not-infrequent comparisons of Serbs to Nazis. The supine Serbian press didn’t question it, however. According to them, Biden merely came to say hello and didn’t make any demands or ultimatums. That would be a first, for a Western official.

Yet after the VP departed, President Tomislav Nikolic said, apropos of nothing, that Serbia had no intention of imposing sanctions against Russia – suggesting the possibility that the subject may have come up during the visit.

The White House merely issued a fact sheet about “progress through partnership” that was just flush with wonderful things the US has done for Serbia since 2001 or so – after Washington installed a compliant regime, that is. Their vision of “partnership” is Serbia doing what it’s told, obviously. Even if the $900 million or so in US aid or investments had actually helped Serbia, is still less than the damages wrought by the 1999 war.

Americans may not remember that war very well, or at all, but the Serbs do. The unprovoked aggression, the vicious lies told to justify it before the world, the wanton destruction of civilian infrastructure and the subsequent occupation of Kosovo by NATO “peacekeepers” who basically delivered the Serbian heartland to the Albanian separatists – culminating in the 2008 declaration of independence – have all added up to make the general populace in Serbia disdain the US government, if not the American people in general.

The fact that Hillary Clinton, who has stores in Albanian-held Kosovo named after her and a monument in Albania proper, called the Kosovo War a “personal matter” for her family explains why the nationalist opposition so vocally supports Donald Trump.

While in Belgrade, Biden expressed condolences to the families of “those whose lives were lost as the result of the NATO campaign.” The non-apology, with the responsibility-dodging passive voice and euphemisms, failed to impress. And then he was on to Kosovo, to open a stretch of highway the Albanians named after his late son Beau. It was another reminder of how Biden is personally intertwined with the 1990s legacy of the Clintons, conveniently forgotten during the Age of Bush and (very) selectively remembered during the Years of Hope and Change since. 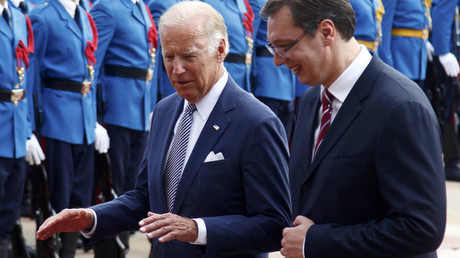 Much has changed in the world, and even in Serbia, since Biden’s first vice-presidential visit to Belgrade in 2009. Back then, he was signaling that the policymakers who “midwifed” the Balkans tragedy of the 1990s were back in the White House and determined to “finish the job.” This time, the gaffe-prone vice-president was basically trying to show that Washington was still the absolute master of events, and that Serbia belonged firmly at (or under) its feet.

When all is said and done, Biden appeared to be attempting to assure himself and everyone around him that the train (of US hegemony) was fine, that Hillary Clinton will soon take over and keep things – that are going just splendidly! – just as they are, forever.

But if any of that were actually true, would he need to be trying so hard?