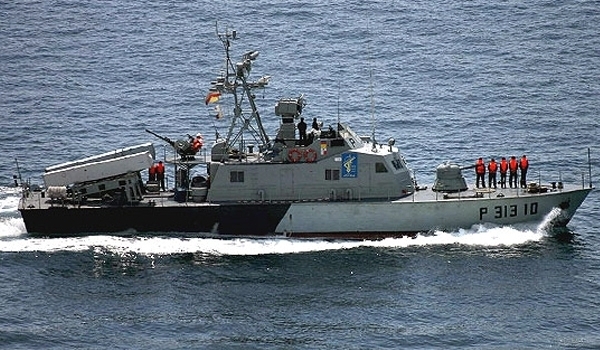 TEHRAN (FNA)- A US warship was shooed away from Iran’s territorial waters after it received a tough warning from an Iranian navy vessel.

The US warship approached the Iranian warship in a provocative move, ignoring the internationally set standard distance from Iran’s Shahid Mousayee patrol vessel and the Iranian territorial waters in Persian Gulf.

The warship then received a warning from the Iranian vessel and rapidly changed direction, returning to the international waters.

The IRGC seized two US Navy boats on January 12 and detained them on Iran’s Farsi Island in the Persian Gulf. Nine men and one woman arrived in Iran’s territorial waters in the Persian Gulf illegally when they were captured by the IRGC Navy.

On January 12, nine men and one woman from the US Navy strayed into the Iranian territorial waters near the Farsi Island in the Persian Gulf. They were immediately captured by the Islamic Revolution Guards Corps (IRGC).

Their boats were equipped with 50mm caliber machine guns and other light and semi-heavy weapons. Many regional analysts have also praised the IRGC’s brave reaction to the US aggression.

The IRGC freed the 10 a day later and after it was proved that the US marines had strayed into Iranian waters only due to the failure of their navigation devices and equipment.

Ten days later, IRGC Navy Commander Rear Admiral Ali Fadavi said the US warships are now feeling much distressed when passing through the Strait of Hormuz after 10 of their marines were arrested for trespassing Iran’s territorial waters.

“The Americans are passing through the Strait of Hormuz with a lot of psychological stress,” Admiral Fadavi said in an interview with the state-run TV.

He, meantime, said that the speed of IRGC’s missile-launcher vessels is twice the US navy’s and it will be increased to three times in the near future.