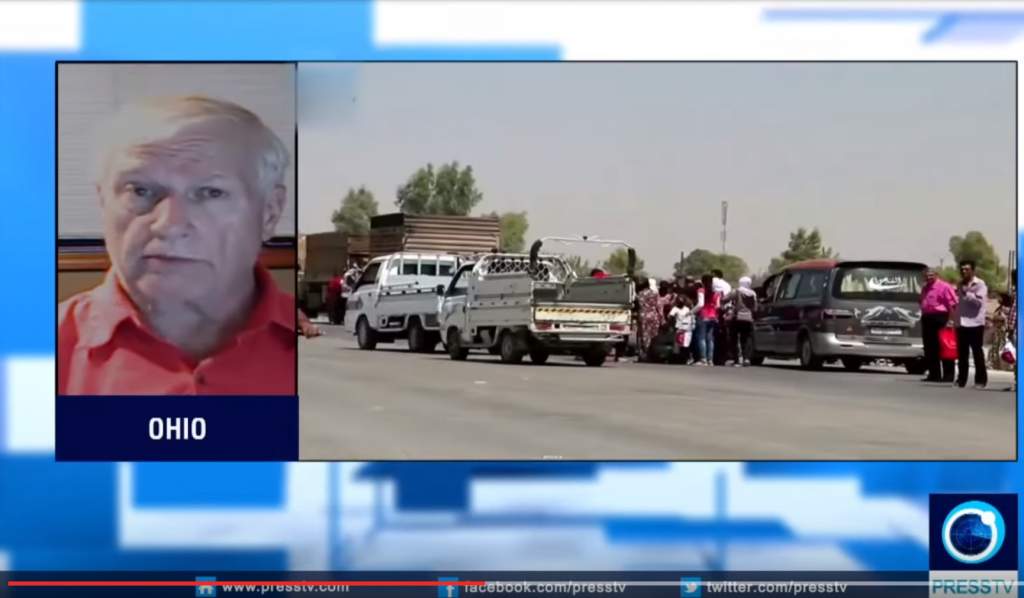 Press TV has conducted an interview with Gordon Duff, senior editor of VT, to discuss the ongoing fight between the Syrian army and Kurdish militia forces in the northeastern city of Hasakah.

Press TV: When the Kurds are helping fight terror groups in Syria, the same as the Syrian army, why do you think they are simultaneously picking a fight now with the Syrian army itself?

Duff: Well this has been a separate battle that has been going on for some time. This battle essentially is one between the Kurdish population of northern Syria and in this case a group of Bolsheviks or communists and this is what the PKK really is, it is not a mainstream organization and they are against the Arab population and how this line draws essentially is the town of Hasakah is really largely an Arab city and because of the military aid from the US and their efforts, the Syrian army has maintained, let’s say, a presence there and the ability to hold on, hold the flag going but the PKK has been pushing to move further and further into Arab Syria in a very separate struggle to any of those going on.

This struggle began decades ago and it has nothing to do with terrorism. This has to do with politics. Now the changes that have happened here, the US presence and the US withdrew 300 of its Special Forces from the region because for some reason they did not seem to be with the YPG – the Kurds that were fighting the terrorists – they were with the PKK and they were fighting the Syrian army and there has to be an explanation for this.

The other one is that in going against the PKK, the Syrian army may be showing us that there is the beginning of a durable agreement to fight terrorism between Ankara and Damascus. Now that may be part of the root of this and if it is and if we are seeing this reflected in the action in Aleppo, this could foreshadow a move that is going to push ISIS out of the sidelines more quickly than anyone guessed.

Press TV: On another note, if the US is backing these Kurdish entities and apart from this Kurdish entities the fight against Daesh, if they are setting off to try to partition Syria, this kind of goes back to allegations that Washington and its regional allies have wanted to partition this country to weaken it in the face of Washington’s main ally in the region, Israel. Your thoughts on that.

Duff: Well Washington has been doing the same thing in Iraq for decades. They worked with Barzani government out of Erbil – I have served there for some time – it has been a normal arena of mischief, the actions that are going on there at the time, the hand of the Erbil government has been involved and in all previous cases the Turkish regime has been part of this, they have had their hand in as well and today the real issue is where does Turkey stand on this and since Syria moved today of all times after the realignment of Turkey, we are going to keep a very close look on this because Turkey’s realignment may have caused the dynamics to change considerably and the Kurds to feel a little more brave than they would have otherwise.

Press TV: A lot of critics are saying that the main objective in Syria right now whether it is Kurdish, whether it is Syrian army, whether it is US and its allies, should be to knock out Daesh to get to rid the world of this Takfiri threat. Now a lot of people say shouldn’t that be the foremost objective there and then if the Kurds have concessions they want from the Syrian government, maybe they can hash it out at a later date but shouldn’t ridding the country of terrorism be the primary objective?

Duff: Well you have got political issues. The war is primarily being fought …, the real war against Daesh is being fought inside Iraq. The battle for Aleppo – and this is significant ground combat, this is not a minor skirmish – it is a political war and only if Aleppo can be held by Damascus, if only they can prove they are capable of holding it firm, those people who have been aiding, let’s say – and it is not just Daesh, it is a number of sister organizations as well – they can be discouraged from what they are doing and among those of course is Israel and the American presidential election is adding more complexity to this, this is an area that we are all having to study here but it has turned into a political war and Daesh, if anything, when and if they were gone, somebody would have to recreate them because there is a need. As long as there is a need and a desire for chaos, there will be a need for an organization like them and I am afraid that is what really is going on here.