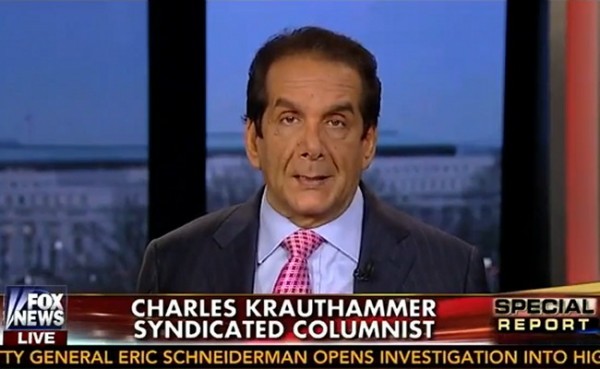 Charles Krauthammer has indirectly admitted that Vladimir Putin killed the New World Order agenda in Syria. Listen to his words:

“When Russia dramatically intervened last year, establishing air bases and launching a savage bombing campaign, Obama did nothing. Indeed, he smugly predicted that Vladimir Putin had entered a quagmire. Some quagmire. Bashar Assad’s regime is not only saved. It encircled Aleppo and has seized the upper hand in the civil war.

“Meanwhile, our hapless secretary of state is running around trying to sue for peace, offering to share intelligence and legitimize Russian intervention if only Putin will promise to conquer gently.

“Consider what Putin has achieved. Dealt a very weak hand — a rump Russian state, shorn of empire and saddled with a backward economy and a rusting military — he has restored Russia to great-power status. Reduced to irrelevance in the 1990s, it is now a force to be reckoned with.”[1]

“Ten thousand have already died and now Putin is threatening even more open warfare. Under the absurd pretext of Ukrainian terrorism in Crimea (reminiscent of Hitler’s claim that he invaded Poland in response to a Polish border incursion), Putin has threatened retaliation, massed troops in eight locations on the Ukrainian border, ordered Black Sea naval exercises and moved advanced anti-aircraft batteries into Crimea, giving Moscow control over much of Ukrainian airspace.”[3]

“I grew up in a Modern Orthodox home. I went to Jewish day school right through high school, so half of my day was spent speaking Hebrew from age six to 16. I studied thousands of hours of Talmud. My father thought I didn’t get enough Talmud at school, so I took the extra Talmud class at school and he had a rabbi come to the house three nights a week.”

At McGill University, Krauthammer was introduced to the writings of Maimonides through Rabbi David Hartman. Krauthammer again confessed:

“That had a big influence on me in the sense that I was going away from my Jewish upbringing, thinking of it as narrow and parochial, and when I was introduced to Maimonides, it was just sort of at the highest level of world philosophy, Aristotelian philosophy applied to Judaism.”[4]

There is more to Krauthammer than meets the eye and ear: “I once described to a friend my Jewishness—I said, I’m a Jewish Shinto. I believe in ancestor worship. That’s the heart of my Judaism.”[5] When he was asked, “What about your connections to Israel?,” Krauthammer did not hesitate to say:

“As you see in my writing, it’s very strong. That would be a third example of my connection to Jewish history. I’ve always been a Zionist, and I believe with utter conviction in the justice of the cause, which makes my writing about it clear and direct. [Defending Zionism] is pretty much out of fashion these days. But to me it’s extremely important, in and of itself as a just cause and also in the context of America and how it looks at itself as, among other things, a champion for freedom around the world.”[6]

There you have it. What is driving Krauthammer’s political philosophy is 1) ancestor worship, 2) Zionism, and finally the Talmud, which essentially provides the diabolical foundation and ideology of the Khazarian Mafia. Can you reason a person out that system?

No. There are limits to logic and reason, and we have a classic example here. The fact is that Krauthammer knows that the war in Iraq is arguably the biggest debacle in this century so far precisely because it sent a six-trillion dollar bill to the American people.[7] It also destroyed the livelihood of decent Muslims in the region.[8] And we all know by now what happened to prisoners and teenagers at Abu Ghraib.

Jean Edward Smith, a biographer and the John Marshall Professor of Political Science at Marshall University, has recently written that Bush’s decision to invade Iraq was the “worst foreign policy decision ever made by an American president.”[9]

Readers know by now that the war in Iraq was driven by the Neoconservative ideology, which is a Jewish political movement.[10] Paul Craig Roberts has recently written that this movement is a threat to much of the entire world.[11]

Krauthammer supported the Iraq war. Now he is telling us that Putin is dangerous because he is obliterating his friends and allies.

Well, Mr. Krauthammer, suck it up. You simply cannot fool much of the world all the time. If you are going to ignore practical reason and dismiss evidence in order to marshal your own ideology, then Putin is basically saying that you are not part of the moral universe.

Krauthammer keeps positing the claim that Russia invaded Crimea, but he will never explain the fact that Crimeans voted for the so-called invasion by 97%![12] Perhaps Krauthammer needs to put that fact in his pipe and smoke it for a few days. Trying to explain it away by perpetuating the categorical lie that Putin is the “new Hitler” ain’t gonna cut it.