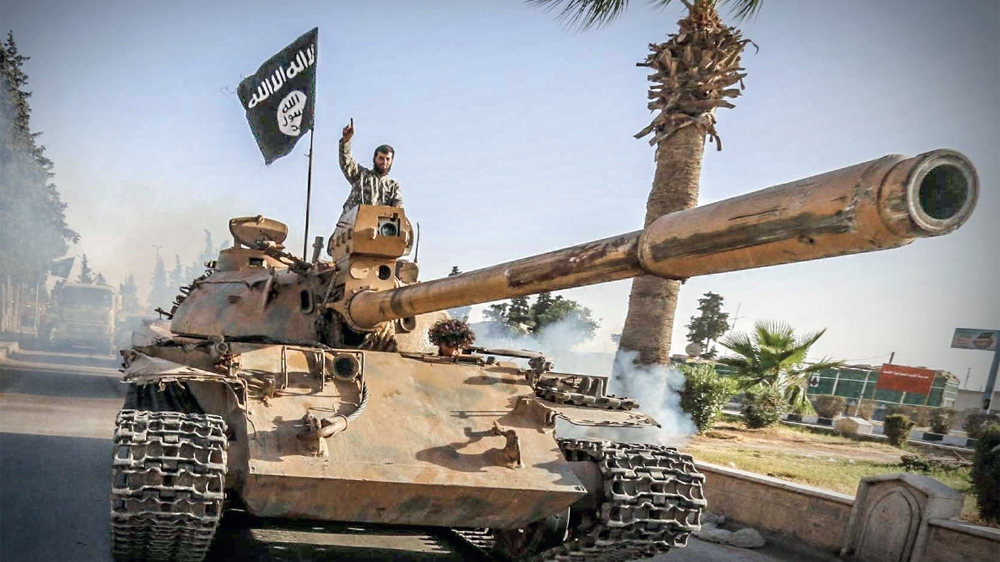 Everything began with a gathering. Almost twelve years ago a gathering was held in Tel Aviv under the title, “how to control Muslims.” Back then, a rabbi rolled out a carpet, put the Koran on it, and asked, “Who can pick this Koran without stepping on the carpet?” Nobody could. Then, the rabbi boasted, “I can.” He folded the carpet until he reached Koran and threw it on another side, finally folding the carpet without stepping a single foot on it. Afterwards, he turned to the audience and claimed, “We cannot uproot Islam, but we have to make them bring about their own doom.” This rabbi proposed an idea calling it, “proxy war.” In a proxy war, they announced, “We, Zionists, provide you, throne-seeking Muslims, with weaponry, property, and soldier while in return you provide us back with victories.” This sort of war is post-modern mainly benefiting those who are not directly involved in battles.

When Iraq was won and Saddam Hussein was dethroned, Iraq was nurturing the thoughts of atomic bombs whereas, prior to the invasion, Iraq had allowed access and research into the U.S. to carry out a thorough tour of inspection of Iraq’s military camps. In a 32-day span, Iraq was conquered, (provoking an endless rush of thoughts considering the access that was granted to American military inspectors and the war that followed). The first step taken after the conquest of Iraq was the apprehension of big heads and masterminds of Al-Qaeda and Taliban who stood at 12 individuals; they were detained in Abu Ghraib penitentiary. Some Jewish preachers and rabbis stepped into the game carrying the burden of making an impact on detainees. After running so many tests and trials, they learned that one of these 12 captives held a Ph.D. in Islamic Theology and Jurisprudence. That individual could not be anyone else other than Abu Bakr al-Baghdadi. After training the detainees, they mustered forth Ba’ath forces. This move was underwritten by untrammeled Saudi support dedicated to organized Wahhabi terrorists. Following all that, they bought properties in Northern Iraq although there was no noteworthy move on the side of this group yet.

Finally 5 years ago, a huge wave called “Muslim Awakening” took form and swept away countries like, Egypt, Yemen, Libya, and others triggering turmoil and foreshadowing their doom. When the “Muslim Awakening” was experiencing its heyday, a group established itself under the title of “Islamic State of Iraq and the Levant” under the aegis of Israel, Qatar, and Saudi Arabia, later shortening their title to “ISIL.”Their main tasks were first to distort Islam, second to project a ruthless and bloodthirsty image of Islam, third to cause split and further rift in Muslim communities, and fourth to send the waves of Islamophobia and taint the image of Islam in the eyes of the world.

The so-called group “ISIL” never means to wage war with Israel. None of their social networking pages were blocked, so they can spread their malicious words all across the world. This group partially achieved to run a campaign of defamation aimed at Muslim Awakening; consequently, they somehow managed to display Islam as a brutal and insensible religion.

A French priest who had traveled to Qom for his study on Mahdism maintained, “In western communities, fear of Muslims has gone viral among the people.” Especially, if they cover their faces or brandish a gun.

Imam Khamenei’s letter written to Europe’s youths was penned down to try to burnish the bleak image ISIL has depicted of Islam to the world.

The heavy blows ISIL suffered in Iraq and Syria’s soil are a death knell which every moment is drawing closer. This terrorist group has inflicted rifts in Islamic communities, waged wars in Islamic territories, and undercut the Islamic governments’ influence and power who are at odds with Israel and Islamophobia.

“Newsweek” revealed, in its latest edition,  ISIS and Jihadists’ use of second world war weapons buried back in time by German Nazis under Northern Africa’s soil. This news agency added that these weapons were unearthed through an excavation project led by Jihadists; moreover, they have stashed this arsenal in their weapon cache to fight back Egyptian army.

This news agency reiterated on Egyptian army’s claims that these terrorist groups, along with ISIS, dug out these troves of weapons from “Sahara Desert” and other parcels of Egyptian desert and transformed them into explosives in their artillery laboratories.

Fathi Shazly, former Egypt’s ambassador in Saudi Arabia, told the news agency, “it does not matter to ISIS whether the weapons are old or not”. Adding on his previous remarks, he also said, “we have received at least ten reports from the Egyptian army that ISIS utilizes outdated weapons.”

These reports, issued from Egyptian army, are swirling in while some countries such as Iran witness accusations and blames laid at their door for providing and buttressing ISIS with ammunition and weaponry in Sina region.