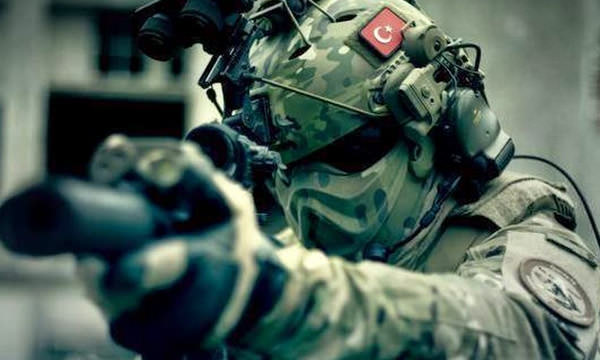 [ Editor’s Note: We knew this was coming, with the success of the Manbij being taken by the US Coalition and Kurdish forces. We now have a dirty dance going on with the US supporting the Turkish attack on Jarablus to clear Daesh from the border town, but which will also prevent the Kurds from getting that important border town.

On the flip side of the coin, Damascus is happy to see the Turks killing some IS people, and also blocking the formation of a Kurdish breakaway region itself. That said, both the US coalition and Turkish anti-terrorism efforts in Syria have been measured, with their own history of having supported the terrorists warring against the Syrian anti-terrorism coalition.

As I type, the bombing and artillery softening of the Daesh positions have been taking place, with Turkish Special Forces crossing the border first for recon work. What there has been no mention of yet is where the Daesh people can retreat to, as Turkey has been their main haven and supply base.

Once run out of the border area, would Daesh then go to work for Turkey by agreeing to keep fighting Assad, and then continue to get arms and supplies? Just when you think the crazy Syrian war has been maxed out, it goes further into the Twilight Zone… Jim W. Dean ]

Turkish special forces have entered Syrian territory in what they say is an operation against the Daesh terrorist group in a Syrian city near the Turkish border.

Turkish officials said anonymously that units of special forces entered Syria through the Turkish border after firing artillery rounds into the Syrian city of Jarablus, in the northern province of Aleppo and some 398 kilometers (248 miles) northeast of the capital, Damascus, at around 4 a.m. local time (0100 GMT) on Wednesday.

The Turkish air force and aircraft from a US-led military coalition have pounded targets in and around the Syrian city. Turkish officials said the special forces are in Syrian territory to open a passage for Turkish ground forces for a larger-scale incursion into Jarablus.

They asserted that the operation is aimed at “clearing Turkish borders of terrorist groups, helping to enhance border security and supporting the territorial integrity of Syria.”

The officials further said that the prevention of a new flow of migrants and facilitating the distribution of basic commodities among the region’s civilian population were also among the goals of the operation. Meanwhile, reports say Turkish tanks have entered Syrian territory to conduct operations in Jarablus.

Observers believe Turkey is more concerned about Kurdish forces inside Syria. The Kurdish population in the region has long been seeking to establish an independent country by potentially taking territory from Turkey, Syria, Iraq and even Iran.

However, the Ankara government has recently been speaking somewhat more softly about the Syrian government, which it has long opposed.

On Tuesday, Turkish Foreign Minister Mevlut Cavusoglu vowed that Ankara would give “all kinds of support” to efforts to free Jarablus from the grip of Daesh terrorists. “We do not want Daesh to exist in Iraq and Syria,” he told reporters.

“What we have said, since the beginning, is that having Jarablus or any other city held by Daesh is unacceptable,” he said.

On Tuesday, authorities in the southeastern Turkish town Karkamis asked locals to evacuate the town and nearby areas for safety reasons. There were no reports of casualties, though.

Syria has been gripped by foreign-backed militancy since March 2011. UN Special Envoy for Syria Staffan de Mistura estimates that over 400,000 people have been killed in the conflict. Back in 2014, the UN said it would no more update its official death toll for Syria.

The US-led military coalition involved in the Wednesday operations has been targeting positions it says belong to Daesh since September 2014.