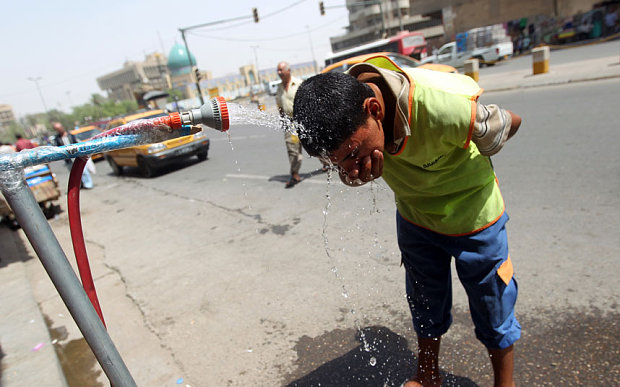 Record-setting heats have deeply affected the Middle East, stretching from Morocco to Saudi Arabia and also other countries. Meteorologists and scientists have issued warnings that these record heats are an ominous sign of worse things in the cards. UN officials and meteorologists cannot resist predicting that the wild growth of the population will pose a lack-of-water threat to the Middle East region and northern Africa; meanwhile, the temperatures will keep rising to record highs complicating the situation for human living. An eminent counselor of the UN who was carrying out investigations into the researches concerning the regional clime changes in Arab countries said, “If all of the predictions come true, we will bear witness to regional aggression, immigration conflict, and refugee crisis more than before.” This searing heat is nothing but a sign of shifting climate change claiming more lives every day and mounting relentlessly.

The Middle-East countries have been tackling the problem of scorching summers, but this year the withering heat waves have been beyond the countries in the region. The heat-index showing how the weather feels like indicates a swath of the UAE has incessantly experienced temperature hikes up to 140 F (60 C) just throughout June. Jeddah, in Saudi Arabia, is not much different as temperatures defied expectations setting new records with 126 F (56 C) increase. The southern Morocco’s relatively cool weather sprang into 109 to 116 F (43 to 46 C) among all the awe and disbelief. During the past month, heat-related illnesses have enervated people in Israel.

The temperatures in Saudi Arabia and Iraq have kept the experts and scientists on tenterhooks. On July 22nd, the temperature in Basra rose to 129 F (54 C), and a day before that temperature hiked to this level in Kuwait, challenging all the precedents and measurements in the Middle East. But bad news is looming large as sizzling heats in Iraq and Saudi Arabia will continue to haunt the people. Zeinab Guman, a 26-year-old student in Iraq, said, “Stepping out of the house is like stepping into a furnace as if your body, skin, eyes, and nose were burning.” She has barely left the house during the daytime since the beginning of June as temperatures hit 49 C. At this time, Karim Aymen who is a staff member and engineer of Saudi Aramco and other staff workers felt like a prisoner as they had to stay in the house and not leave before 7:00 p.m. following an issued decree. Bassem Antoine, a Saudi economist, claims these shattering heat waves have inflicted damage to his country. Hospitals have been coping with a rushing stream of patients suffering from heat-stroke, dehydration, and fatigue due to bone-dry weather conditions. The temperature has struck records at Baghdad airport in mid-June reaching 43 C bearing with it an increase of 10 to 20 degrees at this time of the year. Iraq’s government has been forced to add to holidays as a tentative strategy to deal with devastating heat. Baghdad’s streets bear signs of a cemetery as no one is on the streets other than few stores doing business. According to Iraq’s meteorology department, this heat boils down to atmosphere pressure and shifting climate patterns. The number of days that experience 48 C or more has almost doubled in recent years. If we look back on the past 4 years, we will see that a weather with baking temperatures like the aforementioned cases are short and few lasting for 4 or 5 days and then swept away by cool winds making the soil and atmosphere cool down, exactly the thing which does not happen now and is direly needed.

Meteorologists believe that all these phenomena are not new as a recently-published research in Natural Climate Change in last October has prognosticated that, at the end of this century, the heat wave in the Persian Gulf poses a major threat on people’s lives. Other research centers such as Max Planck Institute, located in Germany, and Cyprus Institute, located in Cyprus, approve the credibility of this foreseen fiasco concerning the Middle East.

A Middle-East meteorologist in Amsterdam has maintained that the governments in the region are not fully prepared to cope with rapidly growing population and climate change.