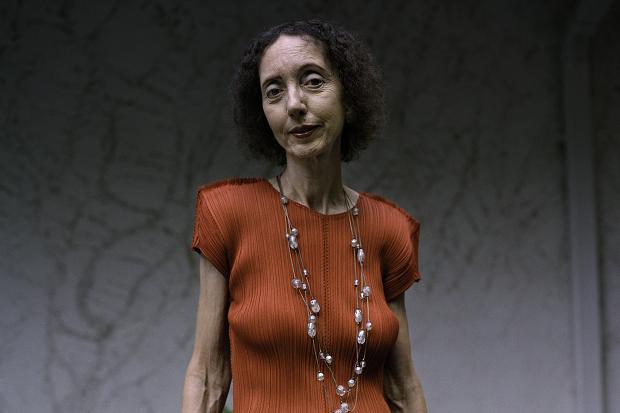 How did this happen? How did a woman like Joyce Carol Oates become an ethnic partisan, seemingly against her will?  What Ms Oates is to the literary world is obvious. Her large,successful career, sheltered by a distinguished professorship at Princeton is what her loyal fans see is the best thing for an icon. But what certain others see in the famous Ms Oates is something else, more like {swear to God)what Ahab’s crew saw in the whiteness of the whale.

For from the start there was something about this strange fish that worried left wing agenda people and a kind of death chase was on to win her over or run her aground.

Oates rose on her talent,  becoming  well known  in literary circles  without the help of the corporate media.   The New Yorker, forced by her fans, finally published a few of her stories.but prefered less original WASP artists like John Updike  Then here comes some magic news about Oates having a much loved Jewish grandmother, a wide screen figure from the Joyce Carol Oates’  childhood. The only trouble was, Oates definitely did not see her grandmother as a brooding victim of antisemitism, or even see herself as  an ethnic outsider.

But then she somehow mysteriously  wrote The Grave Digger’s Daughter which gave the media what it wanted, a personal connection to Jewish sorrow by a celebrity, and everything changed  — along with Oates’  vocabulary now peppered with words like White Christian racists, cowards, antisemitism, alienated Jews, etc Just listen to her in those  interviews for The Accursed!  Well. she also lost her husband and fell in love with another. And a woman in love is always out of her mind’ But Life goes on, bombs fall, children get their guts  dragged out, women raise their fists at Israeli jets. The sick Media is silent in its sickness. So what about it?  In a country where nothing matters so much as Israeli Manifest Destiny, should we be blamed for even  suspecting that the Nobel Prize , so long unfairly withheld, will now fall into her hands?

Why do I even talk like this? What have I seen ? The hunchback with his shirt off? Of course Oates saw it long ago, she knew what the positioned Jews were like, for no doubt the demons were already whispering to her how she could not go on blithely writing away pretending there was no  struggle for ethnic domination between Jews and Gentiles, or acting like the Holocaust was just a slipped gear in history, when in reality it was caused by some permanent toxin in the blood of non-Jews and she must do her part by pointing this out for the sake of society, progress and humanity. No more nice Mrs Smith talk of not wanting to get into this mess of what is or is not antisemitism (Charlie Rose interviews Joyce Carol Oates), no more calling Norman Mailer an American Native Son, as if he at her  command was no longer a Hemingway impersonator.

Did the demons then simper to her how Jews were not without influence everywhere, and should  she refuse…..well….consider Mr Phil Donahue who was once as popular as she, but got his head handed to him for saying bad things against the war on Iraq, a war so dear to the hearts of Zionists (see Phil Donahue on Amy Goodman concerning the crushing of his career).

But she did not refuse. First hint on this was when Oates appeared with Kurt Vonnegut on a panel talk show about censorship.

Vonnegut did not like what is happening in the controlled media and said, “By the time the American people realize what the neocons are doing to their country, they might not have a country,”  Ms  Oates

looked down at her hands. She was not going to give Vonnegut any help there.  She did however say that her own books had been censored by school boards for having a curse word here and there. Nothing like Christian  failure talked up in her recent novel, The Accursed, who in the author’s own words are the White upper class Christians of Princeton during the early l900’s who were silent in the face of social evils like KKK lynchings, women’s voting rights, and Negro intimidation. The book ubiquitously interviewed by talk shows, can be seen as a raw bone thrown into the pro Zionist meat yard to satisfy a  grudge ridden crowd who never sleeps in their efforts to take revenge on the White European Gentile, historical or modern, for whatever can be thought up, the least being for not getting the led out fast enough in l9ll to save the Black population from persecution.  The accusation is of course dwarfed by the silence in our own time at the slaughter of Palestinians by Israelis on our tax money.  In fact the demonic tales in the book itself are just silly compared to the modern horrors of what Jewish paranoia has put upon America in order to feel safe, but who like a mental patient will never feel safe because they cannot give up the thrilling idea that everywhere people want to kill them, even in America where no Jew has ever been killed for being a Jew.