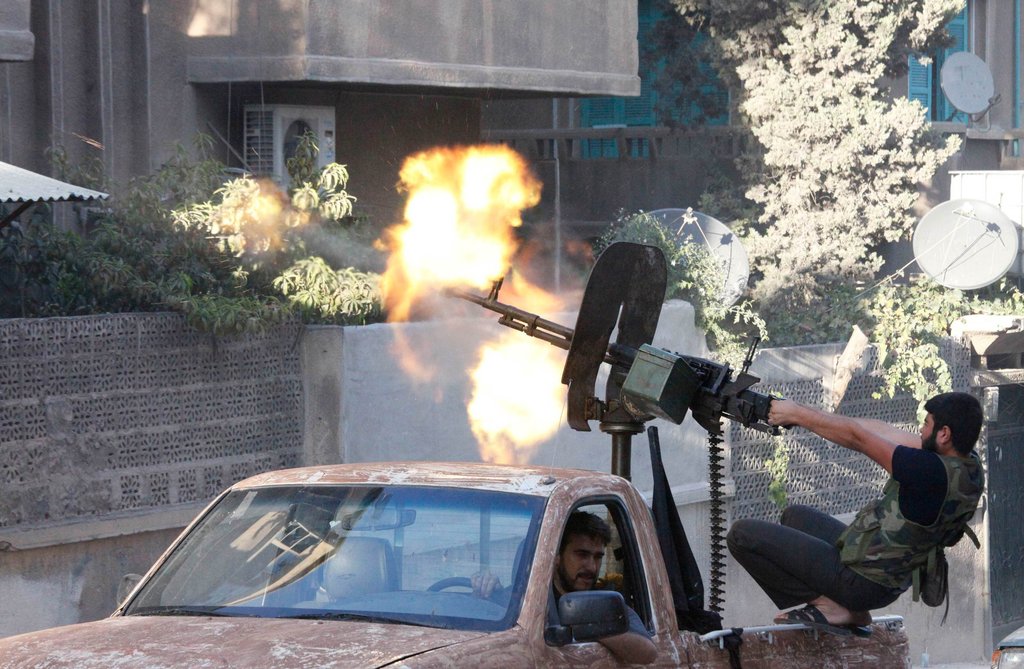 [ Editor’s note: Aleppo has been pushed out of the news with the fighting between the US-backed Kurds and the Syrian Army, which had the US threatening to shoot down Syrian planes that even “threatened” US advisers. Damascus has long asked the US to to keep it informed on where their people are, but were refused. So who should really be at blame for inadvertent US casualties?

And the Turkish incursion into Syria today, where Erdogan has already said he would be doing bombing attacks on any Kurds deemed a threat, I wonder if anyone else who has the military power to do so will get into the threat elimination game, with the self-authorized state immunity that is so popular with the US-coalition members.

This month could bring the end of the Lavrov-Kerry talks on a formula for peace in Syria. But as we have seen, who really has command and control of its proxy forces, including the terrorist ones, seems to be ever changing.

I did a Press TV Debate Show on the Turkish incursion today, where I posed that it could have been in response to the Russian-Syrian bombing offensive, where the TU-23 bombers broke the back of the big jihadi counter attack on Aleppo.

We might be seeing the beginning of a no fly zone and a buffer zone for refugees on the Syrian side of the Turkish border, which will be used as cover to protect the US coalition terrorists from Syrian and Russian bombing. Imagine that… Jim W. Dean ]

Emerging reports from Syria suggest United States naval and special warfare elements may be assisting extreme jihadists break out of embattled Aleppo. Unconfirmed reports of US warships sharing intelligence with the group Jeish al-Fatah, also suggest US Special Forces elements may be trapped within the surrounded city.

If confirmed, these reports would not be the biggest surprise to objective observers. Al Nusra and Al Qaeda, along with ISIL having changed identities a dozen times supersedes any adamant amazement by now. As the Syrian civil war seems to be winding down, we must begin to question America’s real role in this catastrophe.

I was reading earlier today a report FARS News Agency, about alleged assistance being rendered by US forces to a group inside Aleppo. According to this report;

“ Syrian army and Hezbollah said the terrorists in Aleppo are both receiving logistical aid and intelligence support from the western states, specially the US warships deployed in the Mediterranean Sea.”

While FARS may not be the most credible source given the Iranian agency’s past record of sensationalist diatribe, these days every news source needs to be scanned and scrutinized, to find the actual truth of matters. If Bloomberg and the Wall Street Journal can provide puzzle pieces, then certainly the most one sided media on Earth can render puzzle pieces. As to US collaboration with Al Nusra and Al Qaeda, there is already a mountain of proof. But US warships forwarding intel? Green Berets or Seals embedded in terrorist units? I had to investigate.

First of all, Fatah al-Islam was a near dissolved militant jihadist organization from Lebanon. Once classified by the US State Department a “terrorist organization”, magically this designation was lifted in 2010, just after then Secretary of State Hillary Clinton took office. The group, led by the ghost guerilla Shaker al-Absi, is believed to have melted in with Al Nusra and Al Qaeda to form a new jihadist cell, one now surrounded by Assad’s Syrian Army forces.

As far back as 2007, reports like the one ofDavid Welch, Assistant to Secretary of State, negotiating with Saudi Arabia and Saad Hariri of the American-backed government of Fouad Siniora, in order to funnel aid to Fatah al-Islam, foretell of the current US-Russia-Iran-Hezbollah-Israel symmetry going on in the region.

What’s most disturbing about these reports is the fact this same organization planned ambushes and no doubt killer US service personnel in Iraq on a few short years ago. In the final analysis, some American family has dead and buried heroes put in the ground by the same people Clinton and the Obama administration now fund. The funding of Jeish al-Fatah is not in question here, but direct intelligence and advisers is. I hope the reader grasps the significance.

Like other extremists organizations fighting in the region, Fatah al-Islam has no qualms about using barbaric tactics. Some readers will recall recent reports of Jaysh al-Islam using Syrian soldiers and their families in cages in Eastern Ghouta to deter Assad Regime attacks. Incidents such as this, accentuate the devastating news of the Obama administration’s vehement doggedness to overthrow another standing government.

Regime change by any means necessary puts the United States’ reputation on the line, and sullies the legacy of generations of Americans. This says nothing for the far reaching terror and chaos caused. But direct support such as the kind mention by the Iranians bodes of an even more sinister strategy. Jaysh al-Sham has received funding from Saudi Arabia since its inception in 2013, and currently receives funding from Qatar and Turkey as well.

On US military assistance to Jaysh al-Sham, this Yahoo News report from last November tells of land deliveries of ammunition to the jihadists by the Pentagon, and it speaks in the same sentence of U.S. special operations forces. This suggests Special Forces personnel may in fact be with the jihadists blowing themselves up against Assad in Aleppo.

I witnessed a YouTube video just yesterday, an anti-Assad rebel driving a makeshift armored vehicle laden with explosives into a strategic target inside the city. Of course this video could have been concocted, but Pentagon support for rebels there is not.

Turning to the sharing of intelligence in what now amounts to a proxy war with Syria, Iran, and Russia, this is not as easy to determine. Reports Arizona Senator John McCain called for stingers and TOW missiles, for these insurgents is one thing, US Navy or other surveillance or counterintelligence shares is quite another.

But given the likelihood Special Forces advisers are on the ground in Aleppo, it only makes sense to assume the US Navy Seals are there as well. I am speculating a bit, but anybody who familiar with Spec-Ops knows, the Seals are never left blind. Chances are, this time the Iranian reports are accurate.

Finally, this Foreign Affairs report talks about the “rebranding” of Al Qaeda, and how ISIL extremism has afforded the boldest of US enemies a chance to go chameleon. Jaysh al-Sham is now Al Qaeda and Al Nusra, an alphabet soup more desirable as frenemies than ISIL, Daesh, or any other name for barbaric head chopper-offers. At the end of all this, underneath the piles of dead bodies, investigators may one day connect the truck loads of US, Saudi, Qatari, UK, and other western money donations that flowed into Syria to kill off Assad.

This RT report shows a sequence of videos where these Syrian rebels used TOW anti-tank missiles to destroy a Russian made T90 outside Aleppo late last year. Given this, and other mounting evidence, I think it is safe to say American arms and mercenaries are now aligned against Assad and his Russian allies.

The relief chopper shot down just the other day near Aleppo, may well have been as a result of Mr. McCain’s call for Stinger missiles for the jihadists. For those who saw the desecration of the Russian crewmembers’ lifeless bodies, the dreadful end of this proxy war can be surmised.

Our Navy offshore pumping intel in to Special Warfare operatives embedded with Al Qaeda or Al Whatever…. US politicians doing everything in their power to start another war…. a presidential candidate proven a liar 100 times…. Somehow I just do not see all this going well for my country. Europe is overrun – China and Russia, and almost all the Middle East and Africa are alienated – US taxpayer billions are being spent to not transparent ends – one has to wonder if dethroning one political figure was worth it all?

On a personal level, I would just like to hear the justification for all this killing. One TOW missile costs $60,000 dollars, or enough to buy a homeless family a nice small home in America. I think America at peace would help Americans a lot more than war. What do you think?