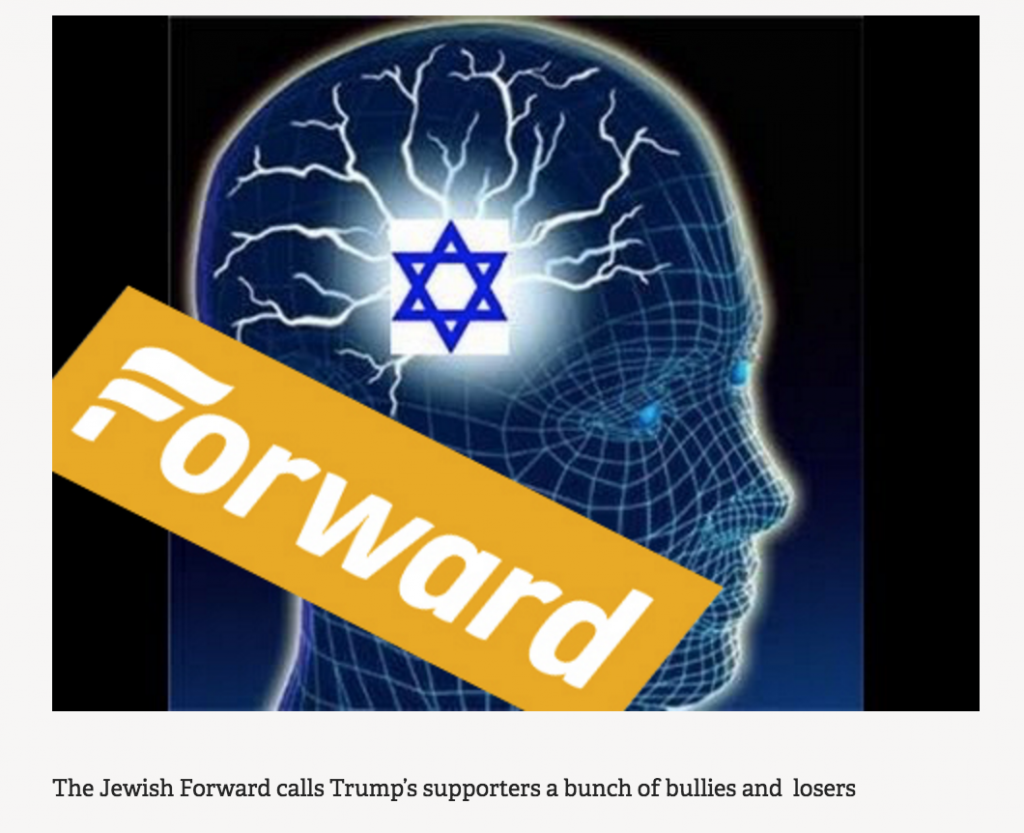 For Goy Hatred on Speed Please Subscribe to the Forward If you want to grasp the level of contempt American ‘progressive’ Jews hold towards their host nation all you have to do is subscribe to the Forward.

Jay Michaelson, a contributing editor for the kosher outlet, proclaims that Donald Trump is the candidate of “the losers.”

The fact that progressive Jews don’t like goyim, especially when they appear in white, is not new, but Michaelson takes Jewish bigotry to a new level.   “As is now well known,” Michelson writes, Trump’s “core supporters are white, undereducated men who have been left behind by technology, globalization and the attendant erosion of America’s manufacturing base. Moreover, their days of white supremacy are coming to a close, and they’re mad as hell about it.”

Why does it seem natural for a Jew to label about half of the American people as ‘white supremacist’ i.e., rabid racists.

Jay Michaelson:  Donald Trump is the candidate of the ‘white undereducated’ and the ‘losers.’

In case you failed to get the message, the Jewish writer reiterates for you: “Trump’s supporters are the losers of the new economy on the one hand, and of multiculturalism on the other.”

Trump supporters, pretty much like Bernie Sanders’s betrayed followers, have one thing in common: they crave a radical change. They long for a productive America, a country with a prospect of hope and a future.  They reject the narrative offered by Wall Street’s oligarchy that America is committed to one thing; Mammon. Does this make Americans into losers? Apparently so, in the eyes of the New York Jewish writer.

The Forward calls Trump’s supporters a bunch of ‘bullies.’ And the losers always become bullies. At this stage, Michaelson realises that he’s gone a bit too far. After all, a Jew throwing gruesome insults at most of the American people can lead to some tragic consequences. The ‘progressive’ editor backtracks a bit. He concedes that Jews are also losers, yet, unlike Trump supporters, Michaelson explains, in the Jewish cultural heritage Jewish losers always prevail:

“Of course, in each case, the(Jewish) ‘loser’ wins, enacting ancient Israel’s fantasies of triumph.” And if you want to know why the Jews think they are so good at spotting injustice, Michaelson has the answer. “Along the way, these biblical stories also instill a keenly felt sense of the injustice of bullying.”

The kosher progressive kindly allows a narrow outlet for criticism of Jewish bad behaviour. “Often the Jewish state is not so different from what Trump’s would be, particularly in the past few years, as ugly racism has become mainstreamed in Israeli society, as Islamophobic rhetoric insists that ‘they’ are unlike ‘us.’”

This is a typical Jewish progressive spin. Israel is not an occasional mirror of an imaginary Trump America, Israel and Zionism were racist and plunderous from the day of inception. The 1948 Nakba was a barbarian act against the indigenous Palestinians driven by racist ideology that is deeply rooted in Jewish culture.   The Holodomor, the systematic starvation of Ukraine was perpetrated by “Stalin’s willing executioners” as the Jewish historian Yuri Slezkin refers to Stalin’s Jews in his monumental book The Jewish Century.  The Israeli ultra Zionist writer Sever Plocker repeated this line in the Israeli outlet Ynet admitting, “we mustn’t forget that some of greatest murderers of modern times were Jewish.”  In 1936, justice driven revolutionary Jews traveled to Spain to fight ‘Fascism’ by killing Catholics and burning their churches. It took us three quarters of a century to admit that three quarters of the Spanish International Brigade were Jewish volunteers and the Lingua Franca of the Brigade was Yiddish. Time to ask why these moral interventionists always happen to burn Churches and kill Goyim.  Is this their ultimate sense of Justice?

And what about the Neocon school, another Zionist ideological precept that has inflicted global disaster in the name of ‘moral interventionism.’ Also, consider Wilhelm Reich, Marcuse and the cultural Marxists who used their sexualised interpretation of ‘socialism’ to weaken the West and destroy the unity of the labour movement beyond repair.

Michaelson’s Jewish progressive propaganda is consciously misleading. It isn’t just recent Israeli politics that shows a small problem with the notion of ‘Jewish justice.’ We have suffered a century of global disasters. Many of them were and still are driven by Jewish ideologies and political practices. Bolshevism, Cultural Marxism, Ziocons, Zionism, Mammonism a la Soros et Goldman Sachs are just different horrid faces of one tribal supremacy – an ideology that refers to the goyim as a bunch of losers and ‘white supremacists’, as Michaelson does in his Forward article.

Let ‘s examine this progressive Pro-Palestine comment in light of Jewish supremacism: moderate and contained anti Zionism is a maneuver used by the Jewish Left as a diversion. Instead of examining the breadth of disastrous global activity by Soros, Goldman Sachs, Cultural Marxism, Bolshevism and Neocons, we are permitted limited criticism of Israeli politics. Why do they allow us to reproach Israel? Because they know that Israel can easily take it.

Michelson ends his Jewish self loving rant, writing“Judaism is proudly the religion of losers. It is a faith, and now a culture, of people who remind themselves every year — every day, even — that they were slaves, that might doesn’t make right, and that while it is human nature for the weak to bully the weaker, it is our divine nature to rise above it.”

These words make clear why Michaelson is afraid of the so-called American ‘losers.’ He knows that people who are oppressed by Wall Street’s mammonism and tired of neocon wars may well rise like the Jews and in the name of Justice identify those who bully them for more than a while.

I do not think that Trump is capable of leading such a move. But Michaelson knows enough Jewish history to gather that the conditions for America’s awakening are ripe.  In fact the rise of the Americans is overdue.   Michaelson knows that Justice may prevail and he is surely aware of the meaning it may carry for himself and his people whom he outrageously labels as of “divine nature.”