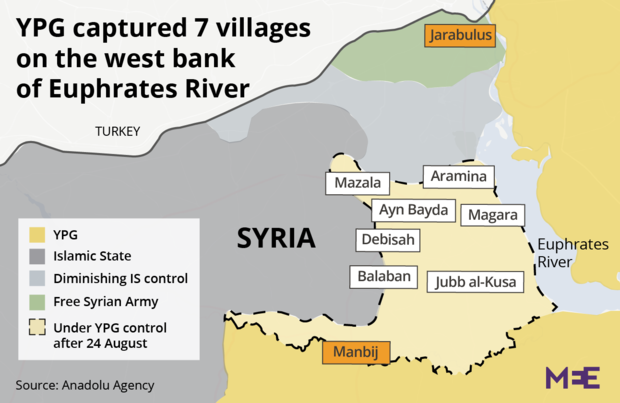 Pro-Kurdish fighters claim US, Syria, Turkey and Iran are collaborating to undermine them, after having served US as shock troops against IS

QAMISHLI, Syria – The Kurdish YPG militia counted the US among its most trusted allies as it fought the Islamic State (IS) group in northern Syria. But that all changed on Wednesday. Turkey’s invasion of the border town of Jarabulus, combined with a US warning the YPG will lose its support unless it withdraws from nearby areas, has left the Kurds feeling abandoned.

But Kurds have taken the US statements to be proof of a collaboration with Turkey to undermine their goal of creating a contiguous confederation in northern Syria, after they have served their purpose as shock troops against IS.

Erwin Stran, a US volunteer with the YPG, said the US statement was a stab in the back.

The YPG have accused Turkey of supporting IS while the YPG-linked Syrian Democratic Forces (SDF) were fighting the group in Manbij, and allege that hundreds of foreigners continued to enter Syria through the Turkish border during the fighting.

Initially, the SDF were planning to move on towards Jarabulus and al-Bab with two newly established military councils to open a corridor towards Efrin, and to unite their three local administrations into one federal semi-government, bordering Turkey. But now this looks increasingly difficult.
read more at Middle East Eye