[ Editor’s Note: These are hopeful words from Mr. Steinmeier, as he is speaking for the German government, but not for NATO. Military brass often does not like balance, preferring to have superiority.

Disarmament is even worse because it means fewer promotions and less opportunity for the high-paying defense contractor retirement jobs. War pays well, where peace does not for the career soldier.

Steinmeier’s words could be an “all talk and no action” ploy. But he is smart enough to understand that, if not for the breaching of the NATO agreement to not enroll the East European countries, Russia’s military would not have had its version of the Manhattan Project to get it into a defensible position against NATO’s march east.

China has recently proposed a military alliance with Russia, something that was unthinkable ten years ago. The only catalyst for that change has been NATO aggression and threat hype, where General Breedlove is the mascot of that half-baked ploy.

We have other news today — rumbles that Western leaders are tired of the Ukraine oligarchs looting the foreign funding going into Ukraine. Vanishing money rarely has a ripple effect in the economy, other that more waves of poverty.

Poroshenko has appointed himself the Santa Claus of the EU treasury, telling his people that visa free travel to the EU is just around the corner, and piles more EU money soon to be released to Kiev. I think the poor man must have a crack pipe taped to the back of his office toilet, and another in the glovebox of his car. You just can’t make this stuff up! … Jim W. Dean ] 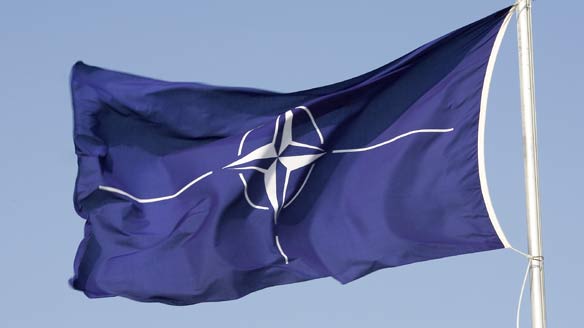 German Foreign Minister Frank-Walter Steinmeier stated that security in Europe is under serious threat and proposed to resume arms control. In his article for the newspaper FAZ, the politician said that the confrontation between the two blocks, which seemed to have been overcome a long time ago, has once again appeared on the agenda.

The restart of the arms control is a “proven means for transparency, risk prevention and confidence building,” Steinmeier wrote. To all, who “want to take responsibility for Europe’s security”, this could be a good opportunity for cooperation, he added.

“Therefore we want a structured dialogue with all partners responsible for the security of our continent,” the foreign minister wrote. Steinmeier also stressed that relations with Russia should be based on a dual strategy, which includes deterrence and dialogue. At the same time, he added that Germany should offer Russia concrete cooperation otherwise “the balance will be lost.”

The minister also stated that peace in Europe in the past two decades has been taken for granted.

“Now, there is again a deep gap that formed between Russia and the West, and I fear that we can’t overcome it quickly, even if we make the most serious effort,” Steinmeier stated.

The German Foreign Minister repeatedly called for maintaining dialogue with Moscow, viewing anti-Russian sanctions introduced by Western countries as inefficient. He suggested that the sanctions should be relieved in the event of progress in the implementation of the Minsk agreement on the settlement of the Ukrainian conflict.

In 2014, relations between Russia and the European Union deteriorated amid the crisis in Ukraine. Brussels, Washington and their allies introduced several rounds of anti-Russia sanctions over Crimea’s secession from Ukraine, accusing Moscow of meddling in the Ukrainian conflict.

The Russian government has repeatedly denied its involvement in Ukrainian crisis and introduced a food embargo against EU countries in response.