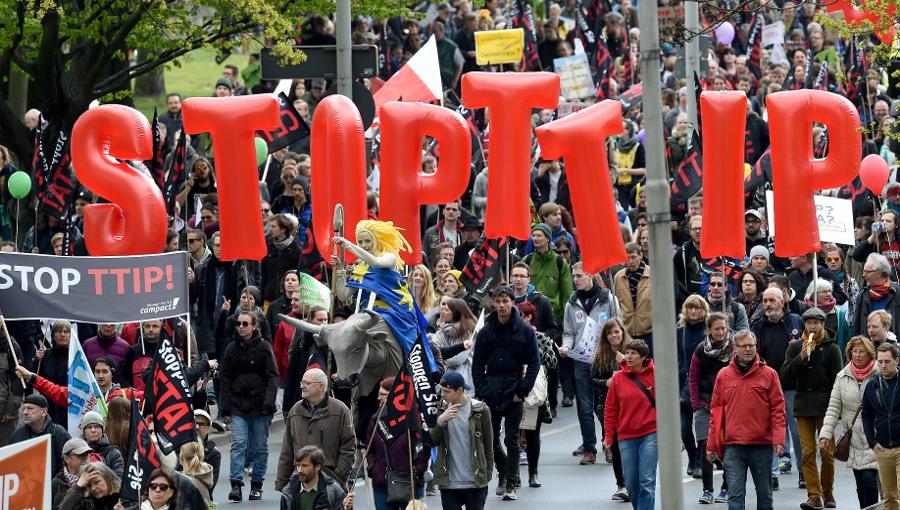 [ Editor’s Note: Germany’s Economic Minister made a flank move on the dead-in-the-water TTIP trade talks to get word of the zero progress after 14 sessions out to the US and EU publics. Thank you Mr. Gabriel.

The public’s attitude, those I converse with, shows a growing suspicion and antipathy toward trade treaties, as future generations have no say so afterwards.

They also do not trust far away dispute resolution mechanisms, where we have a history of powerful interests being able to influence events at the public’s expense. After all, that’s what their game is.

I remember my surprise when hearing Putin blurt out during one of his long press conferences, the kind that no one in the so-called free world ever has, that Russia had to negotiate for 15 years to get into the World Trade Organization (WTO), and yet the West just used other avenues to sanction Moscow when it chose.

That the negotiations are done in secret is enough to send all my bells and whistles ringing. Gosh, …it seems they don’t feel the public would like seeing the proposals put on the table, so as to give their negotiation teams some informed consent.

Do they think we are too stupid to be brought into the process? Do they think we have forgotten what a hustle NAFTA was for Americans, despite its being sold as the best thing since sliced bread?

If anyone has seen any leaks as to what the big hangups have been on TTIP, please pass them on to us in the comments… Jim W. Dean ]

Germany says negotiations between the European Union and the United States over a free trade agreement have failed.

Germany’s Economy Minister Sigmar Gabriel told reporters that the talks had failed to make progress on any of the major sections of the long-running negotiations over the Trans-Atlantic Trade and Investment Partnership, or TTIP.

Gabriel accused the US of being “angry” about the deal that the EU struck with Canada, known as CETA.  He said US officials believe that CETA contains elements that Washington does not want to see in the TTIP, AP reported.

“We mustn’t submit to the American proposals,” said Gabriel, who is also Germany’s Vice Chancellor and the head of the country’s center-left Social Democratic Party.

“In my opinion, the negotiations with the United States have de facto failed, even though nobody is really admitting it,” he said.

The official further emphasized that in 14 rounds of talks, the two sides have failed to agree on a single common item out of 27 chapters being discussed.

Gabriel’s ministry is not directly involved in talks with the US over the TTIP because trade agreements are negotiated at the EU level, AP added. Nevertheless, such a damning verdict from a leading official in Europe’s biggest economy is likely to make further talks between the EU executive and the Obama administration harder, the report emphasized.

Gabriel’s comments contrast with those of Chancellor Angela Merkel, who said last month that TTIP was “absolutely in Europe’s interest.”

Popular opposition to a free trade agreement with the United States is strong in Germany, AP added. Campaigners have called for nationwide protests against the talks on 17 September 2016 — about year before Germany’s next general election.