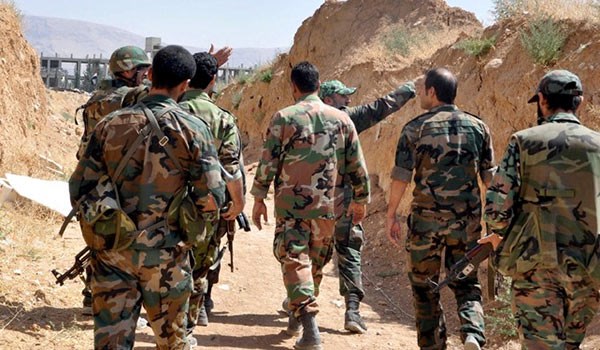 TEHRAN (FNA)- The Free Syrian Army (FSA), backed up by Turkish army troops, has engaged in an intense battle with the Kurdish-led Syrian Democratic Forces (SDF) near the town of Jarabulus at the border with Turkey, sources said, adding that both side have suffered heavy death toll.

“The FSA and its affiliated groups, backed up by Turkish air force and artillery, have thus far captured the villages of Ein al-Beidha, Bolbolan, al-Amareneh, Sothern Da’es and Ba’ar Kousa after hours of fierce clashes with the SDF fighters,” the sources said.

“Though battle between FSA and SDF has been reported near al-Amareneh,” the sources added.

“The villages of Thaljiyeh and al-Hadheibat in the Eastern side of al-Rai also were captured by the Turkey-backed FSA,” the sources went on to say.

In relevant development in the region on Sunday the SDF fighters destroyed a tank of the Turkish army in Northern Syria.

It was the first tank destroyed by the SDF fighters in the border town of Jarabulus in Aleppo province in Northern Syria in retaliation for the Turkish army’s deployment of forces and tanks there.

A Turkish soldier was also wounded in the SDF’s attacks.

“Syrian government forces have thus far cut off a road connecting Khan Touman and Eastern Idlib to al-Jabes in the Southwestern part of Aleppo,” the sources said.

“The Syrian army struck Jeish al-Fatah’s positions in military academy buildings from Um al-Qara’a in in the South and al-Ramousiyeh square in the North,” the sources further added.

“Jeish al-Fatah has suffered a heavy death toll in the attacks,” they went on to say.

Also on Sunday, Syrian Army’s heavy fire did not allow Jeish al-Fatah’s terrorists to transfer any cargo of arms, ammunition and food supply for the trapped terrorists in the Eastern districts of Aleppo.

“The road connecting Khan Touman to Southern part of Aleppo city in still under the fire control of the Syrian Army,” the sources said, adding, “Syrian Army’s artillery units have targeted any terrorist movement along the road passing al-Ramousiyeh and military academy buildings.”

Meantime, media sources announced that the Syrian government forces’ control over roads in Southern side of Aleppo city is not just militarily but the engineering units of the Syrian army have made several barriers on roads in al-Ramousiyeh and military academy buildings districts.”

Also, the Syrian government forces have fortified their positions in al-Senobarat, al-Syriatel and Um al-Qara’a hilltops.

The Syrian soldiers and their popular allies launched fresh round of offensives to capture the rest of aviation technical collage from Jeish al-Fatah.

The army control over 60 percent of aviation technical collage.

TEHRAN (FNA)- Militants in the city of al-Moadamiyeh in Damascus province said they are ready to surrender the city to the Syrian government in lieu of a safe corridor to move to Idlib in the next two days.

Reports said on Monday a thick smoke is spiraling over Moadamiyeh city while informed sources said that the terrorists are destroying their command centers, heavy weapons and arms caches inside the city to prepare for surrendering the city.

Ala Ibrahim, the governor-general of Damascus’s countryside, said that at present, negotiations are underway to retake the city from the militants.

“The Army will start demining operations upon arrival in Moadamiyeh and will open the roads after establishing security,” he added.

Also, other sources said that a number of terrorists stationed in Moadamiyeh have left the city along with their comrades in Darayya.

After four years of occupation Darayya in now under the full control of the Syrian army.

On Friday, the militant groups inside Darayya formally agreed to surrender the town after negotiating with a Syrian government delegation.

Under the terms of surrender, the Syrian government agreed to transport the remaining militants from Liwa Shohada al-Islam and civilians to their requested destinations.

Darayya’s civilians were transferred to the opposition-held Qudsiya District, which is located just West of Damascus City.

The government agreed to provide those civilians humanitarian aid and medical assistance, which was administrated by UN groups.

The militants were then transported by government buses to Jeish al-Fatah’s frontlines in Idlib province.

A long convoy of buses carrying terrorist groups’ members and their families left the city of Darayya in Western Ghouta heading towards Idlib on Sunday.

Al-Mayadeen reported that terrorist groups’ members in Darayya were totally around 1,000 out of which 700 militants called for evacuation from the town.

TEHRAN (FNA)- Iran’s Khatam ol-Anbia Air Defense Base warded off a US radar-evading spy drone after approaching the country’s bordering areas from Afghanistan.

The drone which intended to pass through Iran’s borders for espionage operations was dissuaded from accomplishing its mission after Khatam ol-Anbia Air Defense Base gave it a serious warning.

The Unmanned Aerial Vehicle (UAV) had taken off from a US base in Kandahar and had advanced to areas 20 miles off the Iranian borders when it was alarmed.

Iran has downed many US drones and they have always started reproducing them immediately after conducting reverse engineering.

The Iranian version of the RQ-170 drone was manufactured through reverse engineering of the US drone, which was tracked and hunted down in Iran late in 2011, and has been equipped by the Islamic Revolution Guards Corps (IRGC) with bombing capability.

Back in October 2013, Commander of the IRGC Aerospace Force Brigadier General Amir Ali Hajizadeh said Iran moved as much as 35 years ahead in building drone engines by reverse engineering of the US drone.

The RQ-170 engines are the fifth generation and the engines of Iranian unmanned planes are the third generation, Hajizadeh said.

TEHRAN (FNA)- Battlefield sources disclosed that the Syrian Army troops have inched closer to seizing back the militant-held town of Douma in Eastern Ghouta after inflicting heavy losses on the Takfiri terrorists in their recent offensives.

The army killed and wounded scores of terrorists in Eastern countryside of Damascus.

The Syrian army also inflicted heavy losses on the terrorist groups in other key provinces across Syria.

Syrian Army troops are now very close to seizing back the militant-held town of Douma in Eastern Ghouta after inflicting heavy losses on the Takfiri terrorists in their recent anti-terrorism offensives, field sources said.

“The Syrian army men and popular forces continued to push back Jeish al-Islam terrorists from their strongholds in the Eastern side of the strategic town of Douma, and took control over Ishara 553 Storage Cells and Rahbet al-Ishara in al-Reihan town, and deployed forces  only a few hundred meters away from Douma’s Eastern flanks.

ISIL suffered a heavy death toll and its military hardware, including machinegun-equipped vehicles sustained major damage in the Syrian airstrikes.

Syrian warplanes, tipped off by intelligence agents, targeted ISIL’s bases and strongholds in Eastern side of Ithriya, ending in destruction of several military vehicles.

It was the first tank destroyed by the SDF fighters in the border town of Jarabulus in Aleppo province in Northern Syria in retaliation for the Turkish army’s deployment of forces and tanks there.

A Turkish soldier was also wounded in the SDF’s attacks.

Earlier on Sunday, Turkish warplanes and artillery units targeted positions of the Kurdish forces of the People’s Protection Units (YPG) and residential areas on the Southern side of Jarabulus town, claiming the lives of at least 40 people.

YPG’s centers in the village of Tal al-Emareneh were also bombed by the Syrian fighter jets.

Syrian army soldiers stormed the terrorist groups’ gatherings and concentration centers in the Southern districts of Dara’a city, leaving tens of them dead or wounded.

The Syrian Army troops hit militants’ positions in the Northwestern part of the old customs building in Dara’a al-Balad, inflicting major casualties on the terrorists.

The terrorists were pinned down under the heavy fire of the Syrian army.

A notorious commander of Fatah al-Sham (the newly-formed al-Qaeda-affiliated terrorist group previously known as the al-Nusra Front) was killed in a bomb attack carried out by rival terrorists of ISIL on a road between Quneitra and Dara’a.

Khald Bin Walid terrorist group, affiliated to the ISIL, confirmed that Abu Hamza al-Javabereh was killed in explosion of its forces’ booby-trapped bomb planted on a road connecting the towns of Koudneh and Briqeh in Western Quneitra.

Infighting has intensified among the terrorist groups after they failed to form a united front to confront Syrian government forces’ in the battlefields.

Also on Sunday, Syrian soldiers and popular forces are getting ready to push Jeish al-Fatah terrorists back from the remaining part of Housing Project 1070 in the Southwestern part of Aleppo city.

“Syrian army troops and popular forces are preparing to carry out a large-scale military operation to recapture remaining building blocks in Project 1070 as the pro-government forces have seized back most of the building complexes in recent days,” the sources said.

“The operation is expected to begin within the next hours as the soldiers make their final preparations,” they added.

“Nazir radar system was put into operation and from now on, no radar-evading flying object can enter the Islamic Iran’s skies without permission,” General Esmayeeli said.

“The radar is special to detecting the small flying objects and MQ1, RQ4 and U2 aircrafts and can easily detect and trace ballistic and cruise missiles and most importantly, the radar-evading aircraft,” he added.

In September 2015, Iran unveiled the two home-made radar systems of Nazir and Bina.

Nazir is a long-range and high-precision radar system which is highly capable of detecting targets in low radar cross section and is resistant to radar evading and anti-radar missiles.

The radar can detect all radar-evading targets and is capable of fighting electronic warfare.

Nazir and Bina radar systems have been mounted in the mountainous and plain regions in Southeastern Iran.

Elaborating on the specifications of the two radar systems at the time, Brigadier General Esmayeeli said that they are fully home-made and unique in the region and the world.

“The radars have been designed in different frequencies and with jump frequency and also in (special) bands which cannot be heard by the enemies,” he added.

Esmayeeli explained about other features of the radar systems, and said they are multi-range radars, meaning that they can detect wide-body and stealth targets as well as small planes, including drones, in long distances before they can approach Iranian borders.

He expressed the hope that the two radar systems would be mass-produced within one year.