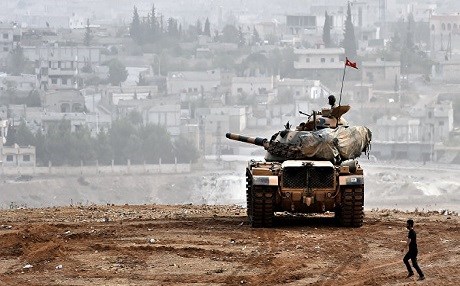 A Turkish tank near the border with the Syrian Kurdish city of Kobani.
By Paul Iddon

Turkey rapidly entered the Syrian conflict directly last Wednesday when its military overran the Islamic State (ISIS)-occupied border-town of Jarablus in support of 1,500 militiamen fighting under the banner of the Free Syrian Army (FSA). Not unlike its initial entry into the US-led campaign against ISIS in July 2015, Turkey is simultaneously striking ISIS and Kurdish forces, targeting the Syrian Kurdish Peoples Protection Units (YPG) forces south of Jarablus with artillery and airstrikes as they advance on the ground against ISIS in that border area.

Ankara has admitted that this operation is as much about stopping Kurdish advances in northwestern Syria as it is about pushing ISIS back from the remaining part of the northwestern Syrian border it occupies. It has long drawn its red line for the YPG at the Euphrates River, threatening to attack them if they advanced westward of Kobani. Turkey did, however, agree to permit a limited crossing of YPG forces who fought under the banner of the Arab-Kurdish Syrian Democratic Forces (SDF) coalition throughout the battle against ISIS in Manbij, which they won earlier this month.

Now Turkey is bombing those SDF forces north of Manbij and demanding that the YPG withdraw fully to the east bank of the Euphrates. The US is supporting Turkey in this operation. US Vice President Joseph Biden even warned the YPG on Wednesday that the US would withdraw its support for them in their war against ISIS if they did not pull their forces back across the Euphrates, as they had committed to doing in May when they began their aforementioned offensive against Manbij.

Turkey is a much more powerful and valued partner for the US than the YPG, which is purely an ad-hoc ally in the war against ISIS, and remains the only country in the Middle East with which the US has an official alliance. However, taking such a clear stance which overwhelmingly favors Turkey in this operation, instead of seeking to negotiate an agreeable settlement for both sides, means Washington is running the risk of alienating their only real ally on the ground against ISIS in Syria.

Washington should instead seek to emphasize its support for Ankara’s Jarablus offensive, provided its scope is limited to removing ISIS completely from Syria’s northwestern border. It should also demonstrate to the YPG that it’s not the only one who has to abide by red lines by openly compelling Turkey to operate only in the northwestern part of Syria, where it does not want the YPG, the 65-mile wide Jarablus-Azaz line. The northwestern Kurdish Afrin Canton should be off limits to the Turkish military, as should Kobani and Jazira Cantons in the northeast, so long as the YPG does not attack Turkey’s border from those territories.

To date all Turkey has proven is that it can facilitate the advance of 1,500 militiamen with heavy fire support a few miles south of its border. It hasn’t demonstrated that it possesses the ability to build a large Syrian Arab expeditionary force capable of capturing Raqqa, the ISIS stronghold in Syria. The SDF therefore remains the most competent allied force the Americans have against ISIS in Syria and the only feasible alternative to their failed train-and-equip program to build an anti-ISIS Syrian fighting force from scratch.

An escalation of these current clashes between Ankara and the YPG risks fatally compromising the fight against ISIS. The bulk of the remaining ISIS forces in Syria remain south of Syrian Kurdish territories in northeastern Syria and eastward of the Euphrates. If Turkey pursues all-out war between ISIS and the YPG, that would likely see it finish off the remaining militants along the border and then fight only the YPG in Syria’s northeast. Crippling the YPG there would relieve the pressure on ISIS in Raqqa, militants which Turkey might not pursue as rigorously, or even at all, since they are not near its frontiers.

A US policy which risks seeing the only potent anti-ISIS force in Syria crippled, if not outright subdued, in exchange for a relatively small number of already isolated ISIS militants being removed from Syria’s northwestern border, is a very poor exchange. It is also a striking reminder that Turkey, and its allied Syrian militia forces, cannot be counted upon to fill the shoes of the YPG as Washington’s main ally on the ground in Syria.

The views expressed in this article are those of the author and do not necessarily reflect the position of Rudaw.