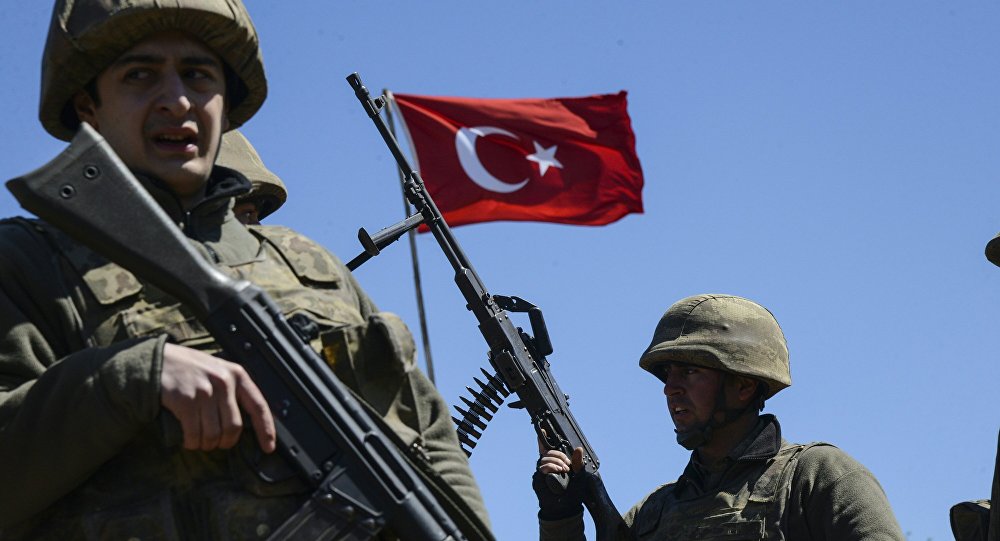 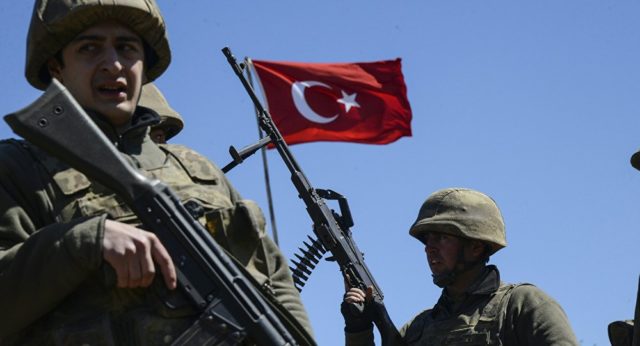 [Editor’s note: When the news broke a few days ago that the Turkish army had moved into northern Syria, my usual highly cynical way of viewing things made me quip to Gordon that the Turkish troops who had been in Syria for years, dressed up as ‘ISIS’ has simply gone home to Turkey, had a good wash and shave, put back on their Turkish uniforms then returned to Syria. Today, this news that ‘ISIS’ proved no obstacle to the Turks move into Syria is a strong confirmation of my theory.

So now we have a situation where Turkish forces occupy a strip of northern Syria west of the Euphrates and they are claiming to be there to destroy ISIS with a secondary objective of making the Kurds withdraw to the East of the Euphrates. One has to wonder what Turkey is upto, what their goal is in taking control of the region. Is it in order to bring peace and stability by clearing out all the ISIS and associated headchopping groups? I very much doubt that.

When Turkey announced they were supported by US airpower, the US failed to deny it, now we are seeing this incursion into Syria as a violation of international law. The US has ended aid to the Kurds, previously our major ally against ISIS and who are being slaughtered by the Turks, just as the Armenians were in 1915 and the Greeks in 1922.

What is most concerning is that no-one is complaining about this Turkish move; last week I reported that Barzani, leader of the Iraqi Kurds, met with Erdogan 24 hours before the Turks moved into Syria to attack the other Kurdish group – clearly Erdogan is co-ordinating Turkish army moves with the Barzani Kurds. What is their goal? To wipe out the Kurds living in Syria and Turkey, driving the survivors into northern Iraq where Barzani’s Kurds are in control?

Perhaps Turkey is attempting to use military force to redraw the borders in the region – taking a strip of northern Syria including Aleppo for itself and creating a rump Kurdish state in Northern Iraq into which they can force the Kurds who have managed to survive the ongoing genocide and ethnic cleansing against them inside Turkey?

Recently, Turkey has been trying to strong arm Germany and other European nations over the issue of the Armenian Genocide; Turkey wants these nations to join them in the great lie that there was no Armenian Genocide. This would set a very dangerous precedent and would be taken as a green light by Erdogan to continue with his plans for a Kurdish Genocide, safe in the knowledge that he can persuade other nations to turn a blind eye. Ian]

Turkish armed forces and Syrian rebels pushed Daesh out of Jarablus within hours, despite previous unsuccessful attempts to free the border town since 2013, prompting Syrian Kurds to suspect that something was fishy with Ankara’s military incursion into the neighboring nation. Abd Salam Muhammad Ali, a representative of the Democratic Union Party (PYD) in Russia, told Vzglyad that Turkish troops took control of Jarablus encountering almost no resistance.

“Judging from how fast this ‘liberation’ took place, I have grounds to believe that this is a show. The militants shaved off their beards and rushed to join ‘moderates,'” he said. The officials described Turkey’s operation as “a violation of Syria’s sovereignty.”

Abd Salam Muhammad Ali did not provide details on how the PYD plans to respond to Ankara’s activities in northern Syria. “Military leaders of the Syrian Kurdistan are most likely working on a plan to counter Turkey’s invasion. The only thing that I can say is that we are firmly against Ankara’s meddling in Syrian affairs,” he said.

Turkey ‘Has to Coordinate’ Its Military Operation With Moscow and Damascus Turkey launched its offensive, formally known as Operation Euphrates Shield, early on Wednesday to cleanse the border area around Jarablus of Daesh and prevent the Syrian Kurds from advancing further west. Ankara maintains that both pose a major security threat to the wellbeing of the Turks.

Rodi Osman, the head of Syrian Kurdistan’s representative office in Moscow, was also wary of how fast and easy the operation to retake Jarablus appeared.

“If Daesh was not Erdogan’s ally, could [Turkish troops and Free Syrian Army fighters] seize the city within hours? The United States and others have to see Erdogan’s secret thoughts. We are persistent in pursuing our anti-Daesh strategy and will fight against the militants until the end. The international community needs to know the truth. As long as Erdogan stays there, Daesh will not go anywhere,” he said.

Osman said that the Turks launched an operation in Syria in response to the victory of the Syrian Democratic Forces (SDF) in Manbij. The SDF, largely made up of Kurdish fighters, liberated the strategically important city on August 12 following a weeks-long operation. The official further noted that Turkey plans to take the border region in northern Syria under its control, but added that the Kurds will not let Ankara redraw the Syrian borders. “By no means will we allow Turkey to turn northern Syria into a second Cyprus,” he said. “Turkey has no right to cross the Syrian border and interfere into the country’s internal affairs.”