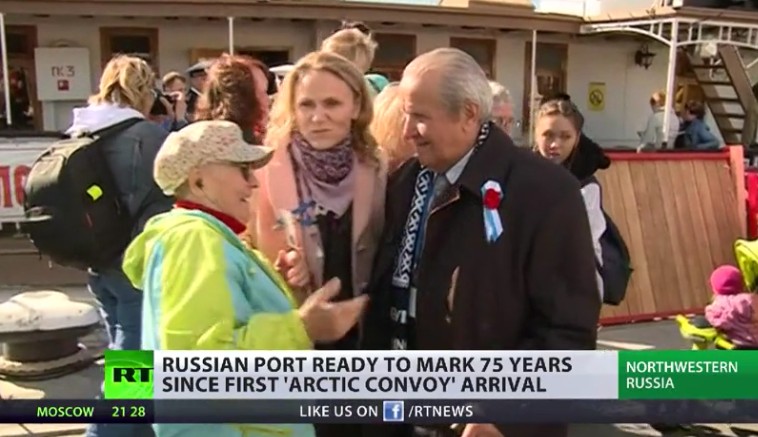 Veterans of the World War II and diplomatic officials from nine different countries arrived in the Russian northern port city of Arkhangelsk to mark the 75th anniversary of the first Arctic Convoy, which delivered essential supplies to the USSR during the war.

Arctic Convoys was one of the toughest and most courageous WWII missions, involving more than 1,000 merchant vessels and warships, bringing vital supplies to the Soviet Union during the war.

The vessels sailed from the UK, Iceland and North America to northern ports in the Soviet Union, primarily Arkhangelsk and Murmansk. The ships had to brace themselves for both the significant interdictory efforts of the Nazi fleet and air forces and harsh weather conditions in the Arctic waters.

Seventy-eight convoys completed the journey between August 1941 and May 1945, transporting four million tons of supplies, including 7,000 aircraft and 5,000 tanks. All 3,300 veterans of the convoys were awarded the prestigious Ushakov Medal by Vladimir Putin in 2012.

On Tuesday, 500 delegates from Russia, the UK, the US, Canada, Australia, France, New Zealand, Iceland, Poland and the Netherlands, including ambassadors and 40 Allied WWII veterans, arrived in Arkhangelsk to participate in the commemoration ceremony marking the date that the first Arctic Convoy, ‘Dervish’, reached the city of Arkhangelsk, Russia’s RG newspaper reported.

The event was also attended by Princess Anne of the British Royal Family and her husband Sir Timothy Laurence, who honored the British sailors killed during WWII who were buried in Arkhangelsk. They attended amilitary orchestra concert, in which the orchestra of the Royal Marines Corps took part. 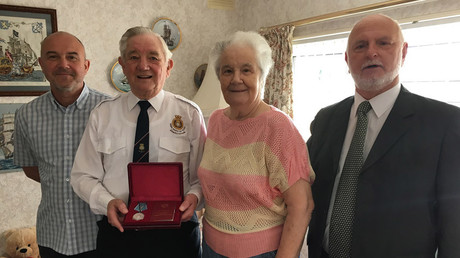 The first Allied convoy to the USSR departed from Iceland on August 21, 1941, and reached the city 10 days later.

The convoy consisted of five British and one Dutch vessel loaded with weapons and provisions and was protected by nine British warships. This successful operation inspired thousands of Soviet and Allied sailors and pilots subsequently to take huge risks to deliver supplies to assist the Soviet Union in the fight against the Nazis.

Many veterans were happy to once again visit the city of Arkhangelsk.

“We are most grateful for the friendliness, for the generosity, for everything that we have received and we always look forward to another visit,” one of the veterans told RT.

At the same time, in Edinburgh, Consul General for the Russian Federation Andrey Pritsepov held a reception with Scottish WWII veterans as a mark of gratitude for their role in transporting vital supplies to the USSR during the WWII, as part of the Arctic Convoys.

Russian Foreign Minister Sergey Lavrov also expressed his gratitude to the veterans of the Allied Forces in a written address. “Your courage and dedication neared the day when the man-hateful machine of Nazism was dealt the final blow,”the minister wrote.

The event was held aboard the Royal Yacht Britannia at Leith Harbor. The Consulate General of the Russian Federation of Scotland is set to host several events throughout 2016 to mark the 75th anniversary of the Arctic Convoys.