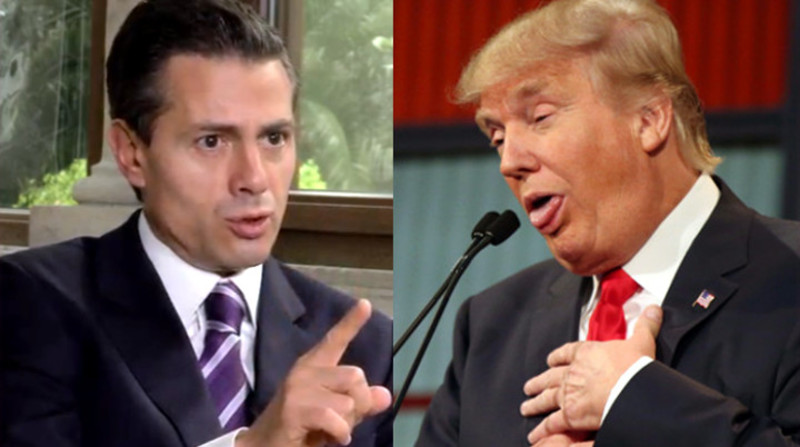 Some contextual facts:   96% of Mexicans despise Trump; that’s over 120 million people!  Trump has a 4 % approval rating in Mexico.  On the flip side, 78% of Mexicans despise President Peña Nieto.  He is widely unpopular among his people with one of the major policy issues being the sellout Pemex, the national oil company, to the global oil industry.  This action is seen in Mexico as a global corporate takeover and sellout of the national resource.

This is a fast moving story so keep up here.

Just now the U.S. Embassy  warned Trump NOT to come to Mexico because they cannot guarantee safety.   They are not prepared to handle such a big trip on such short notice.  And Trump’s secret service detail, while a professional and admirable group, is certainly NOT prepared to handle a mob that will be searching for Trump aiming to protest at the very least and maybe even get violent at the very worst.

Normally, foreign dignitaries can depend on Mexican police and military for protection.    However, due to his super unpopularity, Mexican law enforcement are simply NOT mobilized or prepared to protect Trump on such short notice.   This kind of foreign trip with very little planning is a formula for disaster.

Personally, everyone who reads my articles knows I despise Trump the man on every lack of character level.  His public outbursts making fun of the disabled put me over the top with this disrespectful disgusting person.  However as much I despise him, I do NOT want to see him become a martyr for racists itching to make bones turning the USA into a full fledged race war.  So I am truly hoping this LONG PASS political stunt to save his campaign that is clearly behind in polls and electoral votes fails badly but goes off without violence.

As I write, here in Mexico, the people are in shock.

Right now, Mexicans are mobilizing mass protests.  I don’t think Trump understands how hated he is in Mexico. Mexico City has over 25 million people. This is NOT a reality show where he is the beloved star walking the red carpet.   This is NOT funny!

As for Peña Nieto, his wide unpopularity is in play as well as he makes his own long pass.  He clearly aims to spin this long pass into showing he can stand up to the bully and save his presidency and legacy in Mexico.

Both Trump and Peña Nieto seek political capital from this meeting.  Unfortunately both have completely different agendas that lack synchronicity.  So while it could go well for both parties and maybe even save Trump from his failings with the general electorate, it is more likely to explode into a full fledged international disaster.

Of course Peña Nieto will claim he told the bully to go to hell on his wall. And Trump will make his immigration speech in front of his supporters in Arizona tonight gleefully claiming he got Mexico to pay for his wall.   It will be a bad episode of Boy Meets Bizarro World Gone Mad where no one is actually listening to each other or making sense whatsoever.

And so here we are again dealing with ELECTION 2016; the most bizarre and weird in our lifetime.

Stay tuned folks cause the Howdy Doody Trump Show is on TV again!  Got Popcorn?