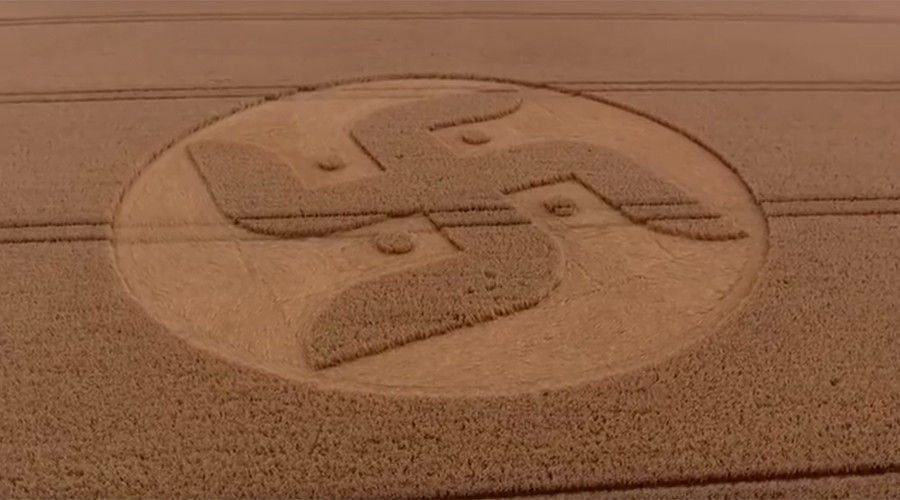 © Who’s behind it? Just humans to deceive us / YouTube

A 180ft-wide crop circle cut in a Nazi swastika-like design has mysteriously appeared in a field in Wiltshire, southwest England, sparking conspiracy theorists (unsurprisingly) to speculate about alien involvement.

Since the 1960s, the phenomena have been cited by some conspiracists as evidence of the existence of extraterrestrials, but sightings of the irregular crop patterns date back to as early as the 1600s.

The farmer who tends to the field in Beckhampton, near Avery, said he was shocked to discover the formation which had appeared overnight, saying he had not made it and had not given anyone else permission to.

Local megalithic researcher Hugh Newman said he rushed to the site to capture footage of the crop circle after seeing a Facebook post about it.

“[The farmer] didn’t say much to me but he was a bit concerned by the symbol and he saw the negative connotation of it when he realised what it looked like,” Newman told the Daily Mail.

But he says the symbol appears to be the positive icon used in ancient Buddhism and Hinduism, which was used 5,000 years before Adolf Hitler adopted it as the Nazi insignia.

Since the 1930s and 40s, the symbol has become synonymous with anti-Semitism and far-right extremism. However, in ancient Sanskrit, the ‘svastika’ symbolises well-being. 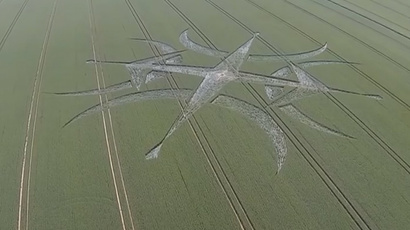 It was adopted by some Western countries in the early 20th century as a symbol of good luck, but with the arms reversed and tipped to a 45-degree angle.

The difference between the two symbols is that the ancient symbol has dots in the gaps between the lines and has round edges, compared to the blunt edges used in the Nazi design.

Newman said: “You get heaps of hoaxers going around and doing crop circles without anyone’s permission and if they get caught they can be prosecuted for it.”

“But some of the circles they cut are so advanced and difficult to do that it is actually land art.”

Crop circles are believed to be created using string and wooden planks which people stand on to break and bend the crops.

It is not the first time crop circles have appeared overnight in Wiltshire. Over the past year, there have been at least three reported instances of the phenomena resembling astrological designs popping up.

Wiltshire is home to Stonehenge, a circle of intricately balanced stones which has stood on the hills surrounding Amesbury for thousands of years. Its original purpose still baffles experts.