By Rand Clifford for VT

Editor’s note:  What Clifford is getting at, just perhaps, is that this is a pretty big explosion for the type of payload we watching going off here.  If it is time to expect a conspiracy, put Israel, Facebook and Elon Musk together.

Something happened this morning, September 1, 2016 at Cape Canaveral, Florida Something frantically being scrambled into conflicting reports, showcasing hallmarks of top-level emergency coverup. Please examine the video above to see why.

“Facebook” was launching a $200 million Israeli satellite on a SpaceX Falcon 9 rocket. The satellite was to provide Facebook with expanded broadband reach in Africa; an initiative financed by Facebook to also enhance broadband and video services for the Middle East and parts of Europe. Primarily, however…a Facebook project to expand internet access in sub-Saharan Africa—at least, officially…. 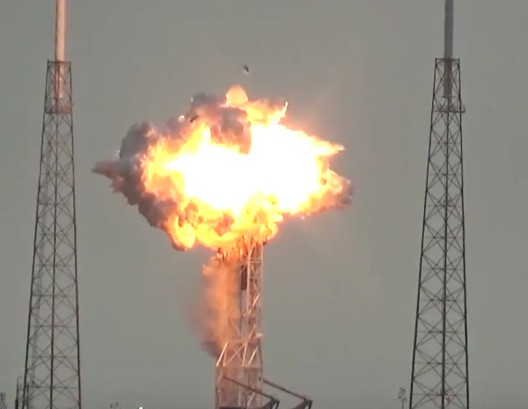 Elon Musk, CEO of SpaceX, tweeted that, “…the accident happened when propellant was being loaded, but the cause of the explosion was not determined.”

The whole thing is being frantically scrubbed because of the…”projectile?” appearing at about the 1:11 minute mark in this video and racing to within about 100 feet of the Falcon 9 rocket “payload”—then the whole rocket enters explosion!

Officially, whatever it was…a bird perhaps—or maybe an insect close to the camera lens; details remain in coverup flux—but the video is as perfectly clear as it is endangered.

See for yourself beginning at the 1:11 minute mark of the video. Freeze every frame starting at the 1:10 minute mark—and please hurry, record, and protect this…anomaly? Scrubbing of original footage and commentary is feverish! Something maniacal/Satanic happened at Cape Canaveral this morning. As always, they don’t want you to know the truth.

In the interest of alerting as many readers as possible before the evidence sinks below the event horizon of the usual public-memory black hole, I am publishing this part now. Please check back tomorrow for more.