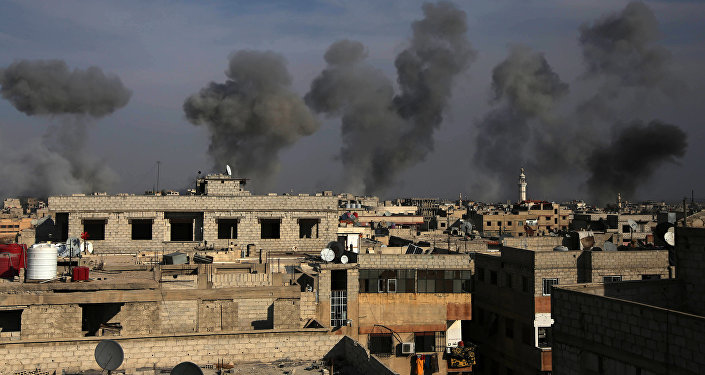 The United States has called on Russia and Iran to help make the Syrian government accountable for allegedly using chlorine against civilians, but at the same time Washington has “let off the hook its Syrian rebel allies who have been implicated if not in all, then in most cases of use of chemical weapons,” analyst Rostislav Ishchenko asserted.

US comments came in response to the findings of a yearlong investigation conducted by the United Nations and the Organization for the Prohibition of Chemical Weapons (OPCW) into allegations of chemical weapons use in Syria.

Ishchenko, the head of the Center for Systems Analysis and Forecasting, pointed out that the UN and other organizations turned a blind eye to documents and evidence provided by Syrian authorities on gas attacks that were carried out by radical groups since a foreign-sponsored uprising rocked the Arab country in 2011.

Bashar Jaafari, Syria’s envoy to the UN, told Sputnik as much in an exclusive interview. The diplomat also said that the worst gas attack that took place in Syria was orchestrated to prevent a UN inspector from going to Aleppo and investigating another chemical assault blamed on rebels. He was referring to a chlorine attack in Ghouta, a Damascus suburb, in August 2013.

Shemshadi Hassan, the Iranian Radio and Television correspondent in Syria and Iraq, also told Sputnik that following the Ghouta attack several Western media outlets spoke to the militants in Damascus suburbs who confirmed that they were behind it.

Ishchenko maintained that the US is adding fuel to the fire with respect to the recent report because radical groups trying to overthrow Bashar al-Assad are losing in Aleppo.

Experts agree that the outcome of the ongoing battle for Syria’s second largest city will most likely determine the future of the country.

Aleppo is currently controlled by the Syrian Arab Army and radical militias, including al-Nusra Fronts and Ahrar al-Sham. The UN, Russia and the United States consider the former to be a terrorist organization, but Washington undermined Moscow’s efforts to add the latter to this list.

“The defeated party in Aleppo will lose in the Syrian conflict. A defeat in Syria will lead to the US losing its status in the Middle East,” the analyst observed. “It will also put an end to Washington’s attempts to maintain hegemony. This is why the US is ready to raise the risk bar to the maximum.”

Syrian Opposition May Be Behind 2013 Ghouta Chemical Attack – French General

Ishchenko further said that Washington’s response to the OPCW’s report “is an attempt to replay a lost campaign [in Syria] by threatening to launch a large-scale military operation.” He called it a “chemical blackmail.”

The analyst added that while Barack Obama is in office “there is hope” that he will not yield to the pressure from hardliners in the US who have long championed America’s greater military involvement in the devastated Arab country.

“This is why Russia needs to resolve the ‘chemical problem’ that the US created in Syria as soon as possible, before Obama’s term runs out,” he added.

Evidence suggests that the 2013 chemical attack in the Damascus suburb of Ghouta was not carried out by the Syrian Army. London-based political analyst, commentator and legal expert Alexander Mercouris told Radio Sputnik that a foreign intelligence agency and radical groups could have been behind the attack.

Earlier, Bashar Jaafari, Syria’s envoy to the UN, told Sputnik in an exclusive interview that the French intelligence service was involved in the attack that left more than 1,300 civilians killed. The incident, he explained, was orchestrated to prevent a UN inspector from going to Aleppo and investigating another chemical assault blamed on rebels.

“These are Syrian allegations and obviously there is no independent corroboration of them. But such things are known to have happened in the past. And if one looks at the actual facts of what happened in August 2013, many people suspected that something like that had been happening for a very long time,” Mercouris said. The analyst further noted that “it does look like the operation may have been carried out by the Syrian rebels and it is possible of course that a foreign intelligence agency was involved.

There certainly have been precedents for such things.” The sarin gas attack took place in Ghouta, a suburb of Damascus, on August 21, 2013. Western leaders and radical groups trying to depose Syrian President Bashar al-Assad blamed the attack on government forces, without providing evidence. Damascus has always denied these allegations. Mercouris pointed out the device used in the attack appears to tacitly prove the Syrian Army did not gas civilians.

“It is largely accepted by those who know about these things that this was an improvised device, probably not intended for use in sarin attacks. The evidence such as it is suggests that it could not have been launched from the Syrian military base,” he said. “This seems to redirect the evidence towards the rebels.” If true, then the question is how the rebels acquired the gas. Mercouris offered two possible options: “It might have been a foreign intelligence agency. The Syrians say it was the French. Others have suggested Turkish intelligence.

And of course it’s always possible that it was the rebels themselves who do have industrial facilities under their control which might have produced this material.”

Report on Syrian Chemical Attacks ‘Part of PR Campaign to Demonize Assad’ The analyst also mentioned that the UN investigation into the Ghouta chemical attack that nearly prompted the United States and the United Kingdom to launch a military operation against Syria seems to have avoided focusing on findings that could implicate another party in the attack, not Assad.  “I think this has been one of the major problems of the whole investigation,” he said, adding that US reports show that their inspectors “make certain findings and then refuse to follow those findings through to their conclusion.”

The primary reason, he suggested, might be the following: they are obviously concerned that these findings “would lead in a certain direction where they don’t want to go.”

This file photo taken on February 23, 2016 shows a Red Crescent convoy carrying humanitarian aid arriveing in Kafr Batna, in the rebel-held Eastern Ghouta area, on the outskirts of the capital Damascus during an operation in cooperation with the UN to deliver aid to thousands of besieged Syrians

“The UN is very much at the present time influenced by the Western powers. The Western powers blame the Syrian government for the attack. They never retracted that allegation even as evidence has mounted up that it wasn’t the Syrian government. So they did not really want the UN to look at the evidence that might point in another direction. In other words, away from the Syrian government,” he said. Mercouris further said that we might learn the truth about the Ghouta chemical attack in the future when historians study the archives or someone familiar with the situation comes forward.