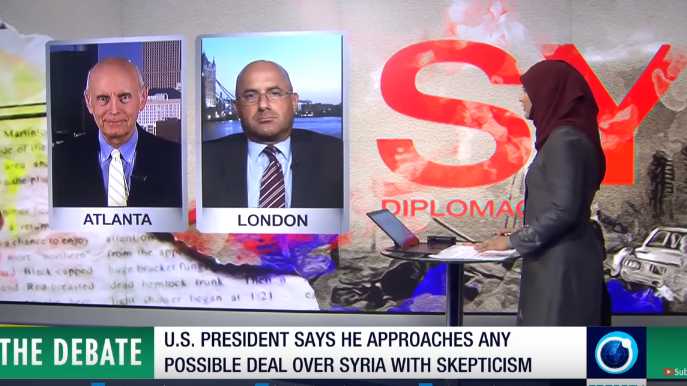 [ Editor’s Note:  It is always a pleasure to get a call to do a Debate Show, especially on a meaty topic like the ongoing military and geopolitical battles in Syria which seem to be nearing a possible tipping point.

I have been on with Richard Millet before, a British shill of the Syrian dismemberment crowd with the usual Assad the monster propaganda, and where the Free Syrian Army is the Mother Theresa faction wanting to heal all of Syria’s wounds.

He threw me slow balls over the center of the plate which I enjoyed hitting out of the park immensely. The drive to the studio where I  had to negotiate two wrecks, one of them closing three of five lanes on the thruway but was able to get through and make the studio on time was worth a holiday Sunday afternoon.

It will be grand fun watching some of these Debate Shows 5 to 10 years from now when we will have the archival material to confirm who was right and who was not. I hope Mr. Millett is still around to do some retrospective shows on all this… Jim W. Dean ]

Syria is high on the agenda as world leaders meet for the G20 summit. As talks continue between different players on the sidelines of the summit, Russia’s President has reiterated calls to find a political solution to the conflict in Syria.

With different interests playing out and complicating the situation on the ground in Syria, we ask what the prospect for peace is. Will it be possible for countries with vested interests to come together for joint efforts, as Putin put it? Let’s find out in this edition of The Debate.